The Public and I have had a challenging time lately.

It all started with the Checkout Lady at Michael’s – remember her?

The only explanation that I can think of for what has happened since then is that she was so worried about my disdainful care of my infant that she called together an urgent meeting of all of her fellow members of the Awkwardly Intense Busybody Club and urged them to begin stalking me.

First, there was the AIBC Member at Chick-Fil-A.

The Kids and I were at the mall – the ultimate in crazy Chick-Fil-A experiences.  The counter guy said, “Next in line, please”, and made eye contact with me, generally indicating that he somehow magically knew that I was next in line even though the “line” looked more like cattle being prodded into a pasture fifty times too small.

(I was going to use a Tinkerbell / Sprinting Thistles analogy there, but, just in time, considered the fact that maybe all of you don’t watch as much Tinkerbell as I do.)

So.  Right as I was about to move forward, someone cut in front of me to get a drink refill.

I really didn’t mind – I’ve been there before, too, just desperately wanting a refill and not wanting to wait behind the herd of cattle / Sprinting Thistles to get it.  So I waited patiently, knowing that her refill interruption would take approximately 5 seconds off of my day.

However, the lady behind me valued those 5 seconds much more than I.  In a tone indicating a strong opinion about my inability to control my own destiny, she spoke into my ear, “She cut in front of you, huh?”

Without turning, I said, “Yup.”

Then, in the exact same ooey gooey syrupy sweet voice that Michael’s Lady used when she told Noah that he was going to choke and die because of my lack of care, Line Lady bent over in Noah’s general direction and cooed, “We just need to learn to be more assertive, don’t we?”

Obviously, somebody somewhere is teaching a class called “The Ultimate in Subtlety: Say It To Their Baby”.

Then there was the AIBC Member at Publix.

I don’t know where you stand on this issue, but there are two types of people in the world:

1. The type of person who wants someone to greet them, offer to help them, and be at their beck and call their entire shopping experience, and

2. The type of person who desires above all else to be left alone with their thoughts and their shopping, and abhors overly pushy or even just helpful clerks.

Okay, there are three types.

3. The type of person who wants the clerk to leave them alone until they absolutely need something, and then magically appear.

I’m a type two, at times pushing type three – but only if I’ve already searched thoroughly for what I need.  I mean, I wish they knew the magical time to appear, but usually instead they appear right when Ali is asking an embarrassing question or I’m wiping leaking poo off of Noah and their merchandise.

So anyway, because of my typical type-twoness, I have an aversion to accepting help from the Publix bag-boys when they offer to take my groceries out to my car.  It just seems too – luxurious, or something.

So last week, on a day when the heat index was well over 100 degrees, I headed to my car with both kids and a cart full of groceries. 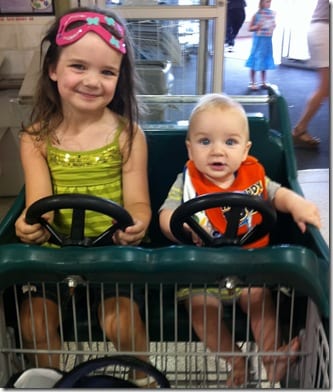 As I was trying to wrangle Noah’s first Car-Buggy trip and get the groceries out without letting him roll down the hill or do this to the steering wheel, 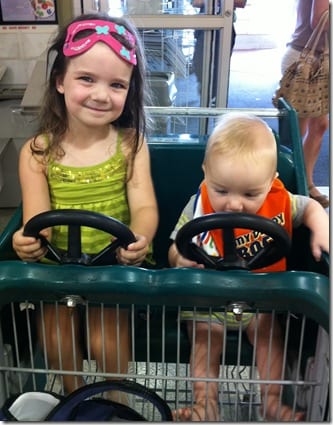 the lady owning the minivan next to me arrived, no kids, with the bag-boy pushing her cart.

And apparently, despite her super-magic double-sided sliding doors and automatically opening rear gate, she wanted her groceries loaded in on the side I was using.

She impatiently waited for me to get my groceries and kids shoved into the car so that she could stand there and continue to tap her foot while the bag-boy loaded her van.

As I was putting the last of what felt like a dozen kids into the car, I said “Sorry”, quietly in her general direction.

At which she replied haughtily, “I NEVER bring my kids grocery shopping with me.”

Oh.  Well there you have it.  Obviously, I should have just left them at home.