This is simply a bunch of random stuff I’ve run across lately (or not-so-lately) that I think is awesome.  Nobody has paid me or asked me to say any of this. The first post in this series can be found here.

If you’re blogging and not using Live Writer, I highly recommend that you check it out – ESPECIALLY if you’re on Blogger, what with all of the usability catastrophes that they’ve been having lately.  I’ve been using Live Writer for a couple of years now, thanks to my friend Rhoda at Southern Hospitality who shared the secret with me.

Why should you try it?

2. It makes it quicker AND easier to upload photos, both in Blogger and WordPress.  I despise the WordPress photo interface, so thank goodness I was already using Live Writer when I switched.

3. You can customize your photo uploading so that it automatically loads your photos in the exact format and size that you want, saving you from having to modify every photo each time you post.

(To do this, click on a photo that is formatted just right, then click on the “Save Settings as Default” option in the lower right corner.)

4. If you choose the option to “Edit Using Theme”, you can write your posts directly into your blog view, so it looks like it will look when it is published.

5. You can write your posts while offline.

Okay – enough justification.  Go download it.  You will thank me later.

After the April 27th Tornadoes, they gave away several thousand free copies of this app to us Alabamians.  The app is $9.99 regularly – pretty pricey in my opinion – but it would have been worth it to have had during the tornadoes when nothing worked BUT our phones (and even they were spotty).

But I don’t like this app for it’s automatic push notifications of weather warnings (mainly because I’ve been getting multiple thunderstorm alerts every stinkin’ day for a month), but because of it’s street-level radar map.

You can actually zoom in to your exact location (which is pinned for you to easily find) and see what the weather is at street level: 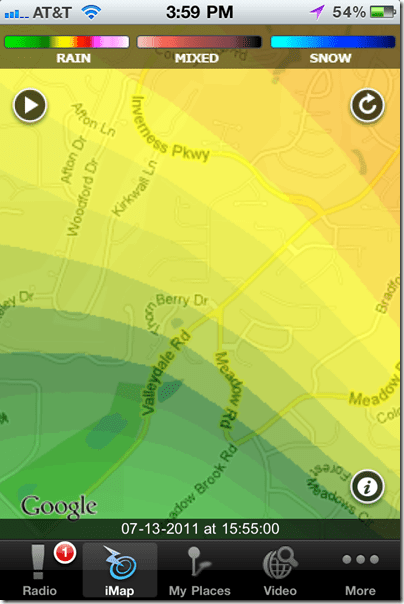 (No, this isn’t my neighborhood, so don’t try to stalk me.)

So due to the daily afternoon thunderstorms we’ve been having here, Ali and I regularly sit and look at my phone, watch the “red” creep to us, then look out the window and see it happen – REAL TIME.

Ali thinks this is fun, but is completely unimpressed with the fantabulous advance in technology that it represents.

(She has no idea what we did in ye olden days.)

Heaven Is For Real.

I never write book reviews – mainly because I never have time to read anymore – but Heaven Is For Real is an exception to both.  Chris heard about this book and told me about it, and I immediately ordered it.  I read it on our trip and was absolutely mesmerized.

Although it reads quickly, it’s not the most well-written book in the world – it’s just a Dad telling his family’s true story.  But the fact that he wasn’t already a writer kind of makes it more endearing.

The book is about their four year old son, Colton, that has a ruptured appendix that goes untreated for several days.  By the time he is properly diagnosed, he very nearly dies.  After his recovery and for the next few years, he starts telling his parents about visiting heaven during his operation, knowing things that he couldn’t have possibly known (like exactly where his parents were and what they were doing while he was being operated on – things that they hadn’t told anyone), and with absolutely astounding descriptions, facts, and biblical truths that a four year old boy would have no way of knowing.

For instance, one night out of the blue, he said, “Mommy, I have two sisters.”

“No, you have your sister, Cassie, and…do you mean your cousin, Traci?”

(They had never told him that.)

“Who told you I had a baby die in my tummy?”

“She did, Mommy.  She said she died in your tummy.”

He told them all about his sister, about her running up to him and being so excited to hug him (which he didn’t like since he was a boy), about the fact that she couldn’t wait to meet them, and how she looked like his (other) sister, but with dark hair like his Mom’s.

When they asked him what her name was, he told them “She didn’t have a name – you guys didn’t name her.”

He also tells them about meeting his Great-Grandfather, Pop.  His Dad showed Colton a picture of Pop, and asked if that was who he met.  Colton said it wasn’t.  Then, months later, Colton saw a picture of his Pop as a much younger man – a picture he’d never seen before – and said “Hey! How did you get a picture of Pop??”

The number of chillbump moments such as these go on and on – I couldn’t quit reading.  Whether you believe in heaven or not, it’s an amazing read.  Some of his descriptions and conversations in the book changed the way I look at prayer – I’ve always been very passionate about prayer, but now it seems so much more real.

And plus, it’s a good feeling to be inspired by a four year old.

I’ve had a lot of people ask me about my Tornado Relief shopping research findings – where the cheapest prices ultimately were.  Although I combined sales and coupons and rebates and store coupons to get great deals, they never surpassed the prices I got using subscribe and save on Amazon Mom (a free service).  However, this was for diapers only – not true for formula or wipes.

(Formula is cheapest if you can combine formula checks with sales, rebates, store coupons and manufacturer’s coupons, but if you don’t want to do all that, the $20 Member’s Mark canister at Sam’s is the way to go – nearly unbeatably cheap.)

Word of Warning, though – Don’t forget to unsubscribe when your kid outgrows a size.  I forgot, so I’m still cramming Noah’s 18 pound rear into size 3 diapers until I run out. 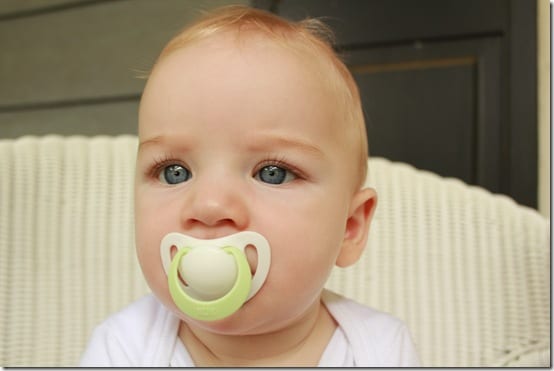 They stay in the mouth when others won’t.  ‘Nuff said.

Hooked on Phonics Learn to Read

I bought this DVD, book, workbook, sticker set for Ali two months ago, and she went from refusing to even try to read to being able to read nearly every word she looks at! I was stunned and thrilled with how quickly it happened.

I don’t know that the set itself was a miracle worker, but what it did do was get her interested in learning how to read (everything else I’ve tried she’s rebuffed heartily), and that’s all it took – she took off on her own from there.

We bought this handheld learning computer for Ali along with the Cars 2 Game and the very affordable camera attachment before our first family-of-four car trip.  I was leery because of some negative Amazon reviews, but she loves it, we’ve been very happy with it, she was able to figure it out with hardly any help.

(For those of you who don’t know, Google+ is the new social network, trying to replace Facebook and Twitter.)

The platform has it’s benefits (the friend circles being the main one), but it can only be awesome if everyone moves over to it and quits Facebook – which, at least in the short-term, is not likely to happen.

One thing is for sure – I do not have the time to continuously keep up with three social media interfaces, so my verdict is still out on Google+.

But If you want to try Google+, I have a bunch of invites I can share – just let me know in a comment and I’ll send one to your email.

So that’s my list of new(ish) things – have you found anything great lately?