We went on a walk Tuesday night in our suburban neighborhood. As we were coming down a hill about a block from home, Ali suddenly stopped walking and silently stared at the ground in front of her. 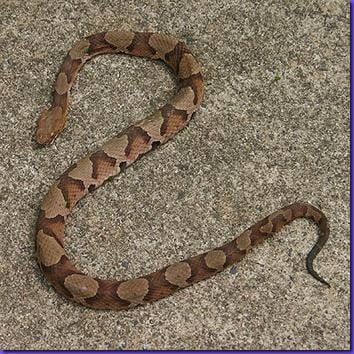 (That exclamation point was in excitement, not fear.)

I happen to be completely fascinated by snakes. What other animal can you let wrap around your arm? And who doesn’t like a bracelet that gives you a massage while you walk?

(I once found a much smaller snake at the beach and played with her all weekend. I even named her – Greta. She had this adorable little broken and off-centered jaw that made her look just like Greta Van Susteren’s long-lost-identical-twin-snake.)

But this snake was much bigger than ones I’d picked up in the wild before – about two feet long, and thicker than Noah’s arm. Just because I like snakes doesn’t mean they don’t frighten me a bit also – they’re kinda like the thrill from a scary Roller Coaster.

We praised Ali for what a perfect response she had to the snake – to calmly stop, not panicking and not getting too close to him. Then we talked about his pretty stripes, and how he wiggled when he crawled.

Chris then took Ali and Noah to the far side of the street (he’s not as fond of them as I), and found a ridiculously long stick and offered it to me.

“Do you want to play with him? But this stick isn’t big enough to pick him up with…”

(Apparently he thought I was braver than I actually am – I had NO intentions of picking up that snake – he was too big, had his head cocked up at a threatening-looking angle, and I wasn’t SURE of his non-venomousness.)

But I took that 15 foot long branch and petted him with it to not look like a wuss in front of my husband show Ali how he moved around.

Until he hissed, jumped, and snapped at me.

Then I was done.

We walked on down the street and saw our Neighborhood-Expert-Neighbor. He is the epitome of neighborhood knowledge. He can tell you which former resident had gout in 1985, or he can teach you how to make wine from the indigenous neighborhood muscadines.

We asked him if he wanted a new pet, and told him there was a snake in the road in front of his next door neighbor’s house. He asked me for more details…

“I don’t know – but he looked harmless enough.”

“What color was he?”

“Brown. But I really think he was nice!”

“Brown?? Sounds like a Copperhead!! I have grandkids that come here, you know!”

He ran up the hill, and next thing we knew, he was beating the ground fiercely with his walking stick as we saw a tail violently and repeatedly fly into the air. 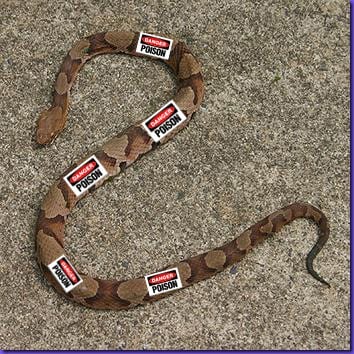 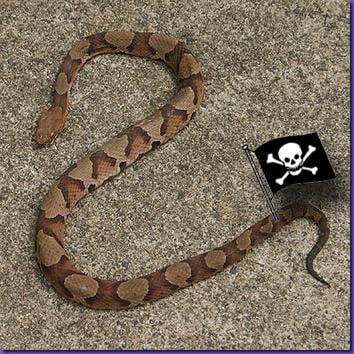 My mind headed into panic mode…

I played with a COPPERHEAD?!?! I am SO stupid. Stupid stupid stupid. I am the stupidest stupid on the face of the planet.

What if Ali hadn’t seen him and had stepped on him and he had bitten her?

What if Chris had run over him with the stroller and he’d jumped in it and bitten Noah?

What if he had crawled up my fifteen foot branch and had bitten me?

How long would I have to not nurse Noah if I’d been bitten by a venomous snake?

Does venom pass through breast milk?

Pumping and throwing away breast milk is the worst atrocity the world has ever known.

Is that neighbor going to put me down in the Neighborhood History Books as “The one who tried to get my grandchildren bitten by a Copperhead”?

Why didn’t that stupid snake warn me?? Oh yeah – he did snap at me.

I told Chris about my panic-stricken thoughts. He shrugged and said, “Eh. It didn’t happen – so why worry? There’s no way Ali wouldn’t have seen it. And if you’d gotten bitten, well, I’m sure that the ERs around here have PLENTY of Alabama Copperhead antidote, and I’ve taken you to the ER several times with one kid in tow, why not with two kids in tow?”

(And he’s supposed to be the paranoid half of our marriage.)

One thing is for sure, though. My innocent and fascinated relationship with the belly-crawlers has been tainted forever. I fear that I might…just possibly…need to completely reconsider my position on snakes.

53 thoughts on “The Post that Proves I am an Idiot.”