I do hope to be back to my “regular” blogging schedule at some point in the near future, but there’s something about having major abdominal surgery plus complications (and having staples still in your belly from it – very chafing if you wondered), being in the hospital for five days, having a brand new member of your family and helping everyone get adjusted to the new reality, creating and providing 100% of another human being’s sustenance, and getting drastically less sleep due to providing those nutritional needs that takes away one’s energy to get other things done.

But at any rate, we had an absolutely magical and quite surreal Christmas – having a precious new baby (who is really spoiling us right now – wow he’s happy), and then to top it off, having the first Alabama White Christmas in recorded history.

And so, here’s our Holiday in Images, with a little narration.  After all – I’m still me.

On Christmas Eve, Ali was quite thrilled with her Christmas nightgown… 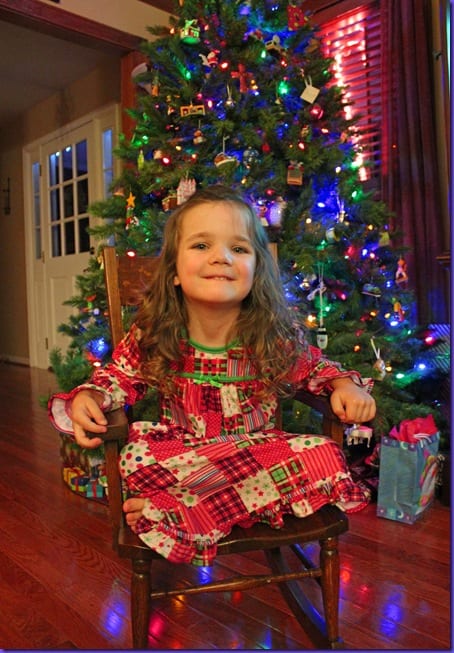 And luckily, her new-nightgown-high was distracting enough to convince her to hold Noah for the first time.  Of course, I took thousands of photos trying to get the perfect one, and this was as close as it got, despite Ali’s expression looking somewhat like Gilly from Saturday Night Live: 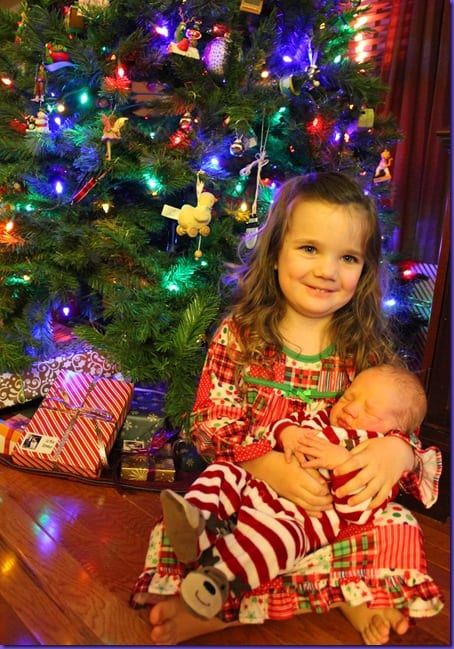 And if you were wondering, Noah was quite indifferent about his new Christmas Jammies. 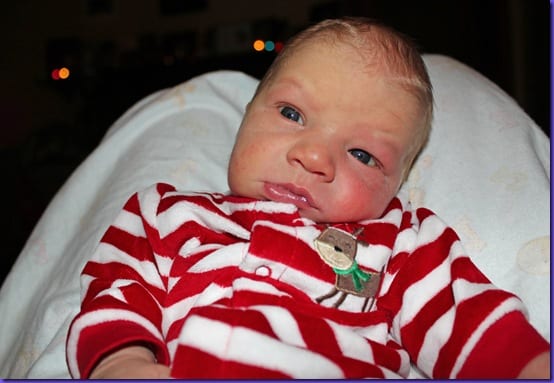 Due to a late night Christmas Eve, we had to actually wake Ali up at 10 AM for Christmas morning.  We told her what day it was, and she said, “But I’m still tired.  But I don’t want to go back to sleep!!!” 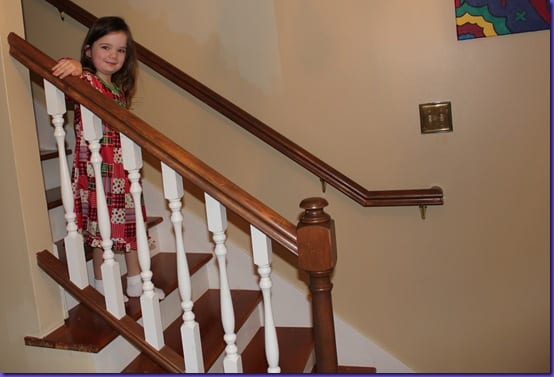 She immediately went to her stocking, passing by the unwrapped-because-I-went-into-labor-while-wrapping-presents gifts from Santa.  Her Crayola Candy Canes were much more thrilling. 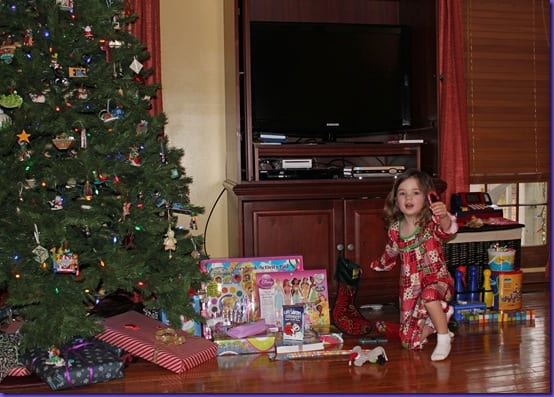 She then proceeded to take out each piece of candy and knick-knack, one by one from her stocking, examining each one as she pulled them out. 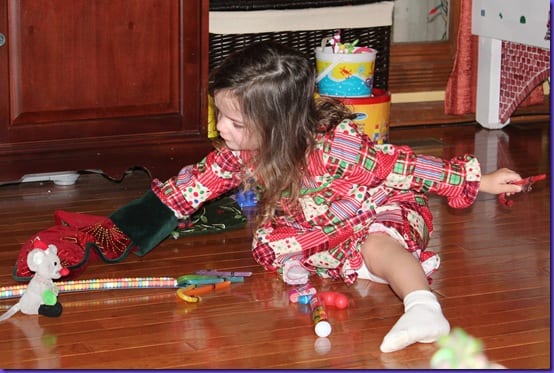 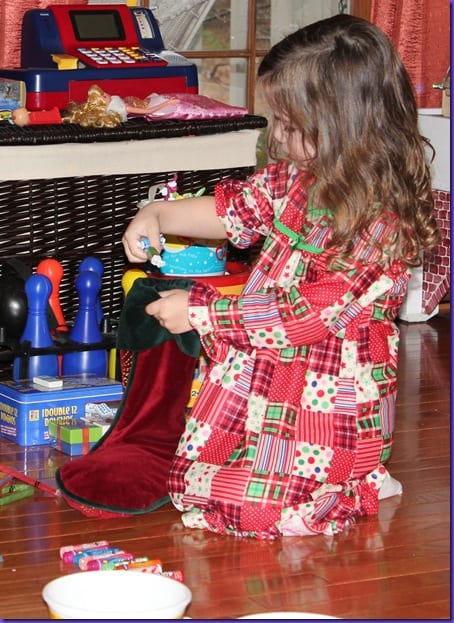 …And then asked for bowls to sort and organize her candies. 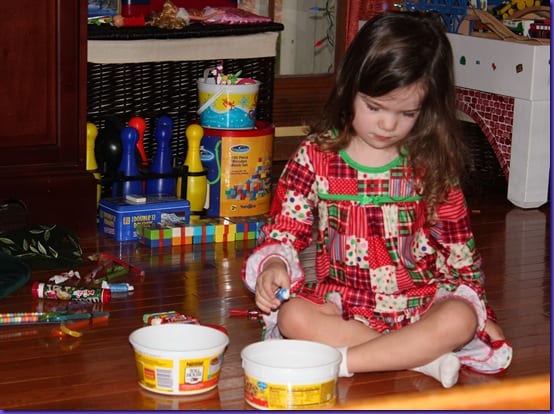 Finally, she got to her presents.  I’d recently bought her a new schoolbook, and Chris told me I should wrap it from Santa just to prove what a geek our daughter was.

Sure enough, she was thrilled: 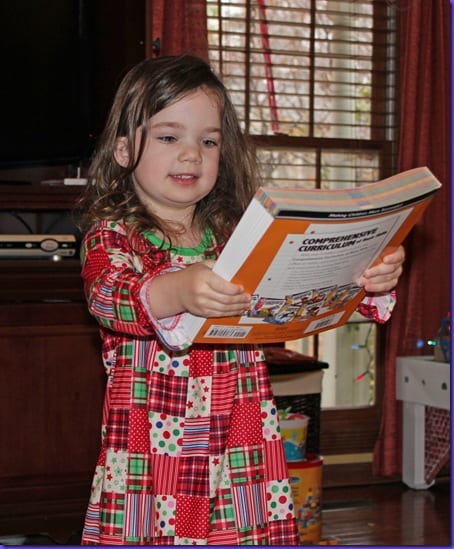 Gotta love not having any preconceived notions about school.

She finally got everything opened, and began studying intently for her Lego building project with Daddy: 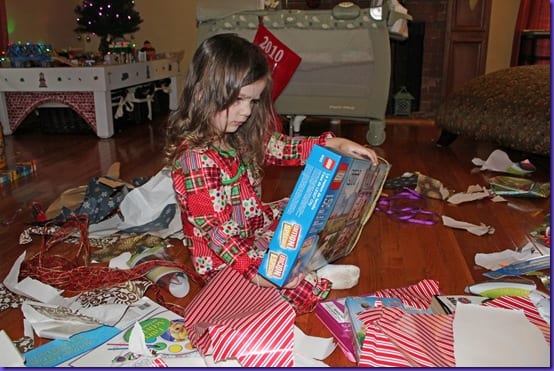 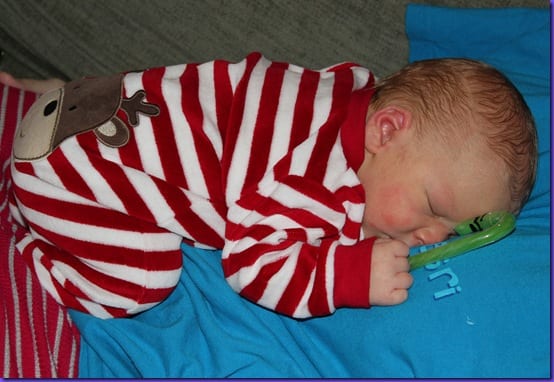 After everything was opened and Daddy anal-retentively organized and displayed it, Ali and Chris headed out in Alabama-appropriate clothing to enjoy the snow: 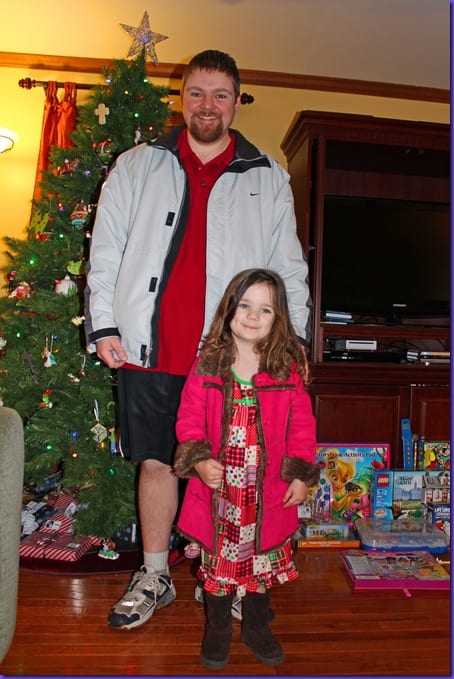 Ali most wanted to taste the snow.  But to avoid the big-fluffy-flakes-in-the-eye-issue, it makes for an interesting expression: 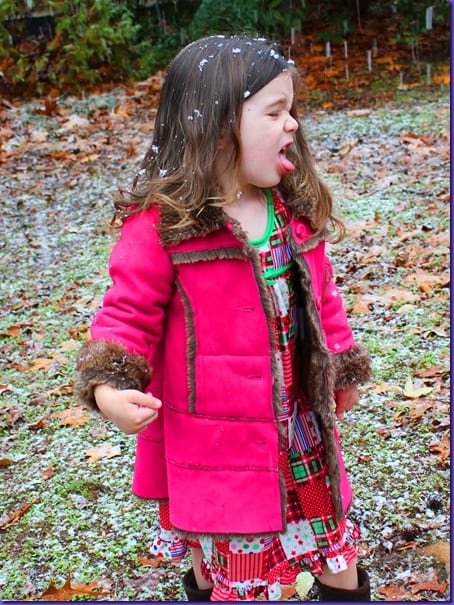 But at any rate, she was quite happy with the flavor. 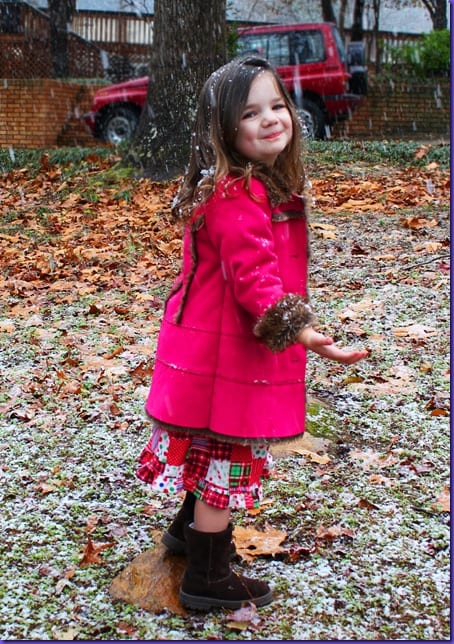 I kept hearing Chris (in his shorts in the snow) asking Ali if she was ready to go inside yet.  And I kept hearing Ali (in her nightgown with no pants) say “No, I’m good!” 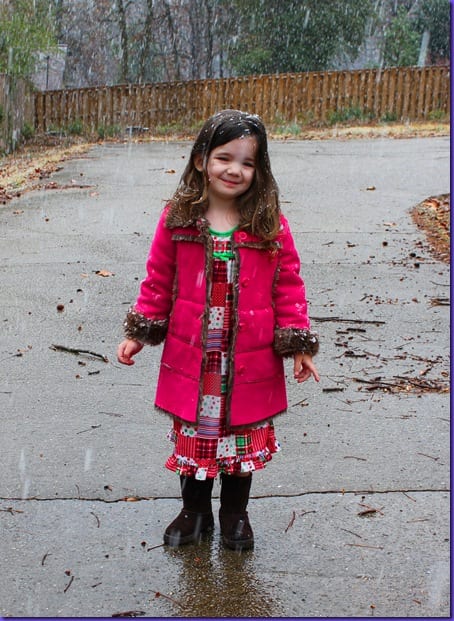 I don’t think Ali has any idea how low the chances are that she will ever see Christmas lights and snow in Alabama at the same time ever again. 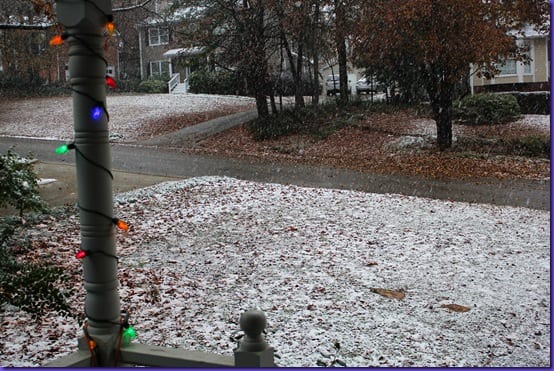 Chris’ parents came over a bit later, and Ali used her new doctor kit to check  on Papa’s recovery: 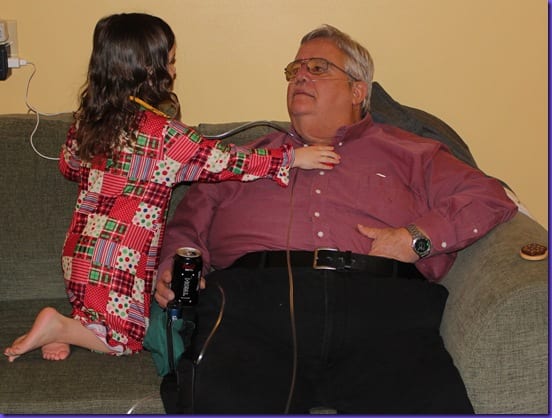 And then that night, we headed over to JC and Lindsay’s to introduce Noah to his cousins for the first time. 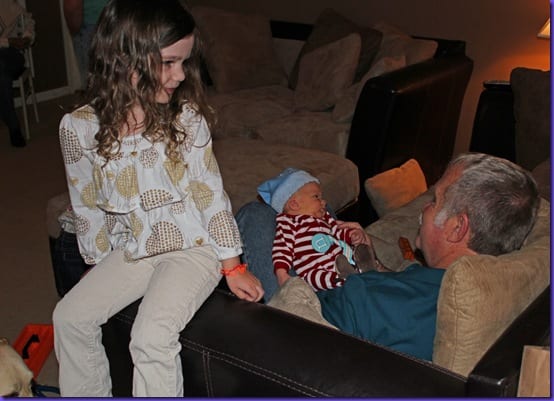 Eli came over to inspect him, and my Dad asked him, “Do you know who this is?” 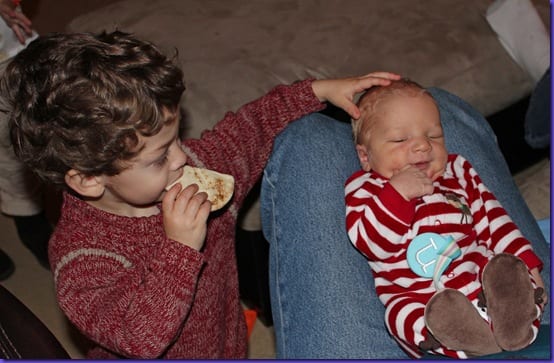 Tessa wasn’t quite as interested – she was more interested in making sure that she hadn’t lost her status as Pop’s baby. 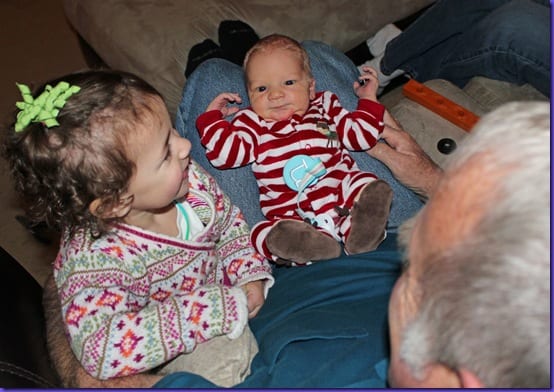 Before the present chaos took over, Ali used Gramamma’s “What God Wants for Christmas” set to tell the family the Christmas story, 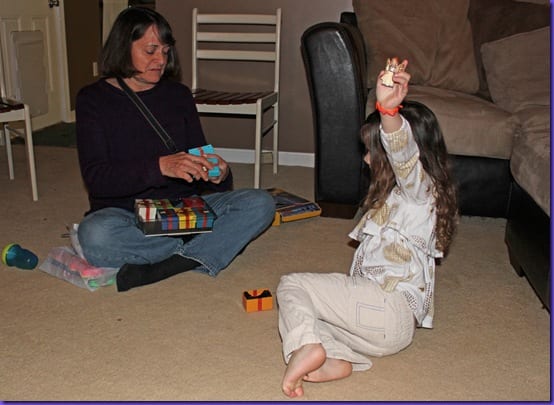 And then Ali and Eli led a rousing, albeit chaotic version of “Away in a Manger”. 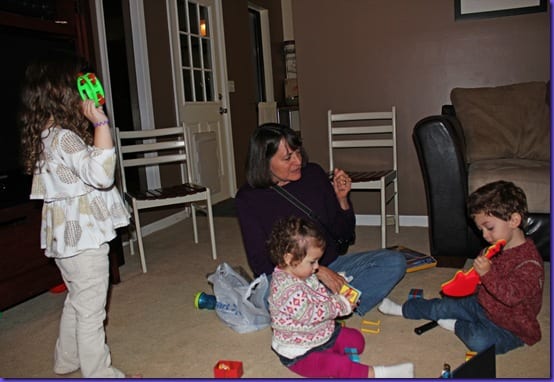 Ali’s favorite present?  Well, I think they were all her favorites, but she was pretty thrilled with her new magical wardrobe from Eli and Tessa: 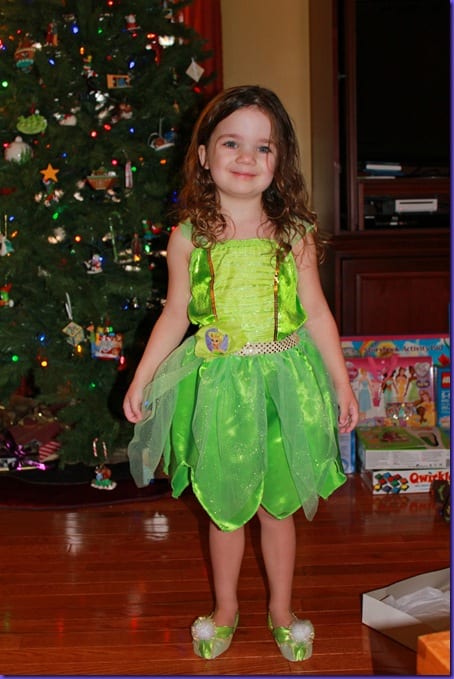 It was an awesome Christmas, but by the end of it, there were at least two of us who were quite ready for the present of sleep. 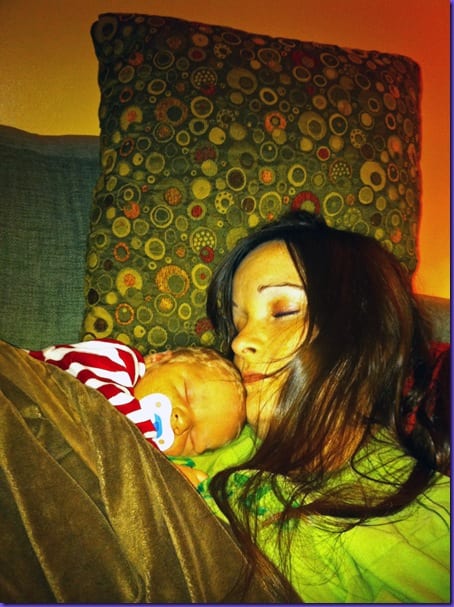 Which, by the way, we’ve gotten much more of since that first night at home.

…and now it’s time for another nap.

14 thoughts on “Christmas in Images.”