A few weeks ago, I rather bashfully proclaimed via Twitter and Facebook who I found to be THE most romantic singer in the world. I expected everyone to make fun of me for my choice (Bryan Adams – …sigh…), but only one person did, and a bunch of people agreed with me, surprisingly enough.

But what I REALLY didn’t expect was that my proclamation sparked the widest reaching conversation/debate that I’ve ever had on my Facebook wall… and it was fascinating to see who everyone chose for their most romantic artist.

So, when Chris and I were sitting on the couch that night, I asked him who his pick was, and it didn’t take him much time to answer: Norah Jones.

…And then he got this faraway, dreamy look in his eyes as I saw him start to mentally romance-out to Norah Jones…

…And then the singing began, as he gave me multiple examples of Norah Jones songs that he found to be especially romantic…

So, the next week, when I got an email asking if I’d like to review and give away a copy of Norah Jones’ newest CD, well I just HAD to jump at that opportunity!

Norah Jones’ newest collection, “…Featuring”, will be released on November 16th, and it is an amazing collection of all of the collaborations that Norah has done over the past decade.

…Which makes this album one of the most diverse albums I’ve ever heard – 18 songs with artists from every genre, including Dolly Parton, the Foo Fighters, Willie Nelson, OutKast, Ray Charles, and Ryan Adams.

(Ryan, not Bryan Adams…too bad – a duet between Norah Jones and Bryan Adams would be, like, the most magicest moment ever for our marriage.) 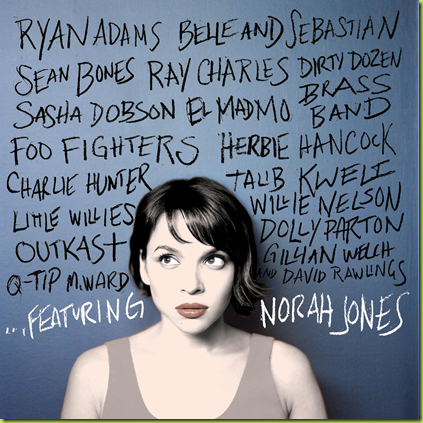 I loved all of the different sounds and genres of the album – it includes Blues, Jazz, R&B, Rock, and Country, to name a few.

And Chris? He most definitely approved.

If you would like to win a copy of this excellent new album, leave a comment and tell me who YOUR choice is for the most romantic artist.

Best of luck! This giveaway is open until Monday, November 15th. The winner will be randomly selected and posted on my giveaway winners page on Tuesday, November 16th (the same day the album is released, so if you don’t win it, you can always buy it!).

Disclosure: I received a review copy of the CD, but no other compensation for this giveaway, other than, I suppose, an extremely blissful husband. My opinions are always my own. And yes, I know Bryan Adams is one ugly man. But he’s got an amazingly romantic voice, much like Ms. Jones.

104 thoughts on “Who’s Your Most Romantic Singer? And A Giveaway – Norah Jones’ New Album!”