Last Tuesday, I went to Children’s Hospital for the morning for a Blogger Media event.  Myself and five other local bloggers (Nanci, Angie and Trish, Andre, and Val) were taken on a behind-the-scenes tour of the hospital, where we got to learn all kinds of amazing facts about our state’s only free-standing Children’s Hospital, which also happens to be one of the top 10 biggest in the nation.

I have to admit, I was a little scared of going, seeing as how I’m 5 weeks away from giving birth and didn’t know how my uber-pregnancy-emotions could handle being in a Children’s Hospital.  But even the NICU was a bright and encouraging place – no pregnancy tears came from me!  Instead of being completely and totally freaked out by all the possibilities of what could possibly go wrong (in a ephemeral-emotional-pregnant-way), I was reassured and encouraged by the unbelievably top-notch care and attentive and kind staff available in my city, lest we ever need it.

And, when I first arrived, they washed away all my fears by telling us some very, very exciting news: They were going to take us up in the Lifesaver helicopter.

If you’ve been around awhile, you’re probably aware that I LOVE heights.  Sure – they scare me a wee bit, but the rush far outweighs my fears.  So the thought of going up in a Helicopter for the first time in my life thrilled me to my soul.

So we took the elevator up to the forbidden rooftop Helipad (I’m sure our tour guides had to enter some super-secret code along with their retina and fingerprint scans to access it), where we were all introduced to how shockingly small a Lifesaver helicopter really is: 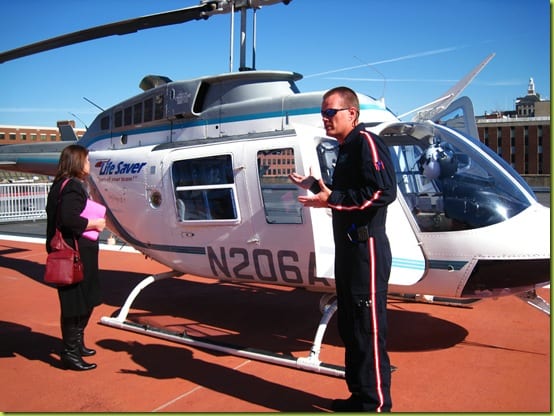 Seriously – that thing was tee-NINY.  The cockpit was this smallish hole in the front of the plane where I’m sure the pilot could only fit if he hadn’t had a large breakfast, and the back seat consisted of two smaller-than-airline-standard seats and a stretcher that had to go all the way up to the pilot to have enough room for a patient: 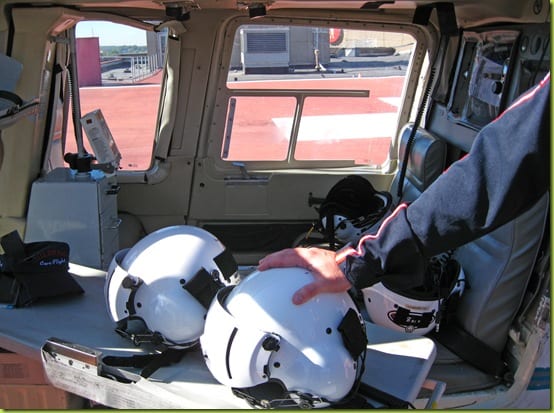 I was simply stunned that they were able to work on the most critical patients in such a tiny space.

And, to make it even more shocking, they told us that if they had a baby that they were transporting, they had to remove one of the seats to make room to bolt an isolet in, which meant that either the in-flight nurse or the respiratory therapist had to sit in the floor in a tangled mess with the other one’s legs.

So they told us all about their procedures and the flights and all of the super-cool parts of their job, and then it happened.

(I really should have known it would.)

The in-flight nurse looked at me and said, “If you don’t mind, I have to get personal with you in particular for just a moment.  What trimester are you in?”

And immediately, I knew what that question meant.

I thought of the possible responses…

“What do you mean, trimester?”

“It’s not a baby! It’s a tumor.  I’ve got an appointment to have it removed after I leave here.”

But I answered, knowingly sealing my fate.

“I’m sorry, ma’am, but you can’t go up.  There are extreme vibrations and high heat … we can’t run the risk of exposing you to that.”

“But you’re an in-flight nurse! On a lifesaver helicopter!!  Where could there be a safer place to give birth??”

And, with complete deadpan delivery, “Yes ma’am – We work on children.  Your baby will be fine, but I can’t guarantee the same for you.”

Of course, I accepted my fate of watching from below, and begged for a rain check, which they gladly gave me.

(And I WILL be using that rain check.  As soon as possible.)

I listened in envy as the other bloggers giddily relayed their adventures of flying over the city and circling their houses, as their families came out and waved to them with tears of joy and excitement running down their cheeks… and I dreamed of my future Helicopter ride.

On Friday, Nanci (who DID get to go up in the helicopter), brought me a cruel and torturous reminder perfect baby gift so that I could always remember who was to blame for my missed adventure: 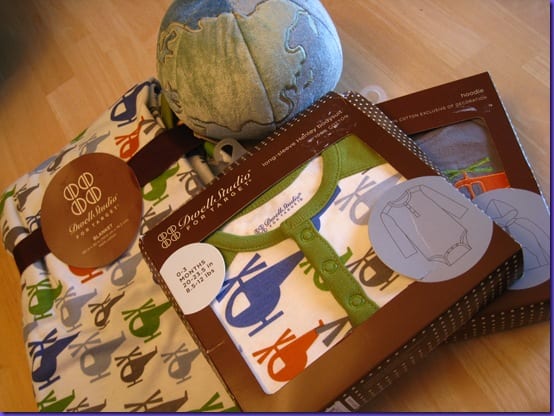 (And the earth toy was to know what I missed out on seeing, of course.)

Yes, this missed adventure will go in Noah’s Book of Blame right away.

Maybe they’ll let me take that rain check a little early – you know, when I get really desperate to get this kid out.  I bet all those vibrations would be as effective as an hour (or more!!) of jumping on Ali’s trampoline…

Good thing Children’s Hospital has my safety prioritized – that makes one of us.