Ali is determined to lose a finger.

Not in a quick it’s-done kinda way, like, say, chopping it off, but more in a slow, painful, death-by-strangulation kind of way.

(Which reminds me that when I was a kid, I believed that body parts, when they had their circulation cut off, went through a very specific color changing process: First they turned white, then red, then blue, then green, then purple, then black, then they immediately and without hesitation fell off.)

(I was careful to always stop at purple.)

I usually let her play in her room in the mornings while I do my bible study (that is, if I’m too lazy to get up before she does, a side effect that Noah has had on me more often than not as of late.) She usually just arranges her stuffed animals, puts on ALL of her dress-up clothes, or locates toys that she thought were lost forever.

A few mornings ago, she played in her room, then watched Dora while I took a shower, THEN we headed downstairs for breakfast. When I was at the bottom of the stairs and she was at the top, she said, “Look Mommy! I put on a ring while I was playing!!”

Obviously, I couldn’t see from the bottom of the stairs and so just assumed that it was one of her play rings and gave the “Oh that’s beautiful!” expected answer.

About halfway through breakfast, I happened to notice that her index finger was QUITE swollen and purple.

I looked further down it…and realized that she had gotten out her tiny hair rubber bands and had put at least 50 of them onto her finger, piled on top of each other in a strangling heap, where they had stayed all the way through playtime, Dora, and breakfast.

I managed to peel them all off JUST before her finger turned black and immediately fell off.

On Wednesdays, it is imperative that she get down for a nap at a normal time so that she gets up in enough time to go to Cubbies. So I put her down for her nap and gave her strict instructions to go STRAIGHT to sleep – no playing or talking.

I thought she had obeyed my strict instructions.

Everything was quiet for nearly an hour.

Then I hear the sound that No Mamma wants to hear an hour into what they THOUGHT had been naptime: a completely calm and unsleepy and obviously-not-having-slept-a-wink voice saying, “Hey Mommy…Hey Mommy…I need you for a second.”

She tells me in the dark, “Hey Mommy, I got my bunny’s neck-hole stuck around my finger and it won’t come off.”

I feel her finger. It’s huge. And swollen. And probably purple.

“Hey Mommy, it’s stuck. I put Baxter Bear’s neck-hole on my finger all the time and it doesn’t get stuck…but Bunny’s neck-hole does.”

What the heck is a neck-hole??

I turn on the light.

Ahhh…a neck-hole is the bow around Bunny’s neck. Except that it is now a Boa Constrictor. Or at least acting like one on her finger.

I STILL can’t get the ribbon to come off, and it’s obvious by the size and coloration of her finger that it’s been on there the ENTIRE non-nap, and she’s been probably trying (very quietly) to remove it the ENTIRE non-nap.

I finally gave up, got scissors, and unceremoniously removed Bunny’s neck-hole, leaving quite the REAL hole in his neck.

That night at Cubbies, she told Gramamma about her neck-hole issues.

“Oh yeah, she did the SAME thing at my house last time!!”

So naturally, I put Ali under strict orders to no longer play with ANYONE’S neck holes, or ALL neck-holes would be violently eradicated.

So naturally, she found a new way to get stuck during what was supposed to be naptime: 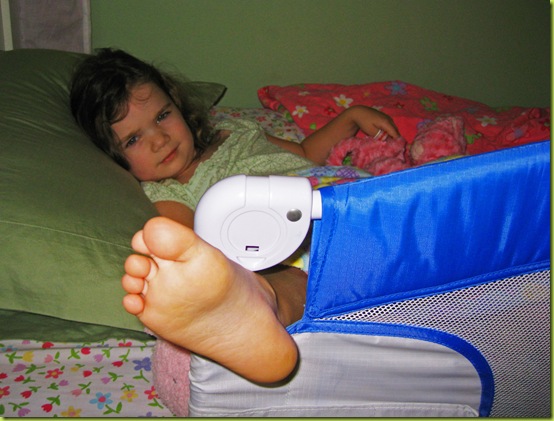 Having two feet is SO redundant.

12 thoughts on “Having Two Index Fingers is SO Redundant.”