No, this isn’t a profound commentary on society – Philosophy wasn’t my favorite college course, if you haven’t noticed by now. This is simply what my imagination does to entertain itself while reading children’s books for the ten thousand five hundred and seventy third time… 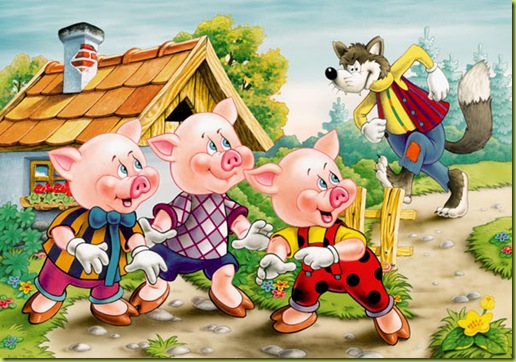 Once upon a time there were three little pigs who lived at home with their Mother. The Mother Pig had bought a self-help book entitled, “Parenting Adult-Aged Pigs”, which enlightened her to the fact that she was making her boys into Mama’s Piglets by letting them live with her well into their 30’s.

So she sat them down and told them that it was time for them to become men and go off on their own.

They cried their little piggy eyes out and stomped their soon-to-be-marinated pigs feet and begged her to at least let them take their Sony Playstation with them.

Although Mother Pig was a bit fond of playing Guitar Hero 5 after she tucked them into bed at night, she figured that it would only be fair to let them take it.

(Plus, then she’d have an excuse to buy that Wii that she’d been eyeing.)

So the three little pigs packed up their Aeropostale man-purses and went on their way.

The first little pig was the laziest of the three of them – he had really not spent more than an hour away from his Playstation (or bed) in at least 6 years. He decided to apply for welfare and get government-subsidized housing.

The second little pig wasn’t much more industrious. He rented a room at the extended stay motel with the blinky-light sign that had a few missing bulbs.

The third little pig wasn’t really any smarter than the other two, but had pickier taste in his dwelling, so he decided to build a brand new house with a 120% Mortgage, even though he had yet to find a job. But hey – he could live off that 20% for a WHILE.

Well, their no-good friend the Big Bad Wolf headed over to Mother Pig’s house for his daily routine of playing Playstation with the pigs and mooching whatever food was in the house, and was shocked and surprised to find them gone.

At first, he figured that would just mean more food and Playstation for him, but when he found out they took the Playstation, he was furious!

Mother Pig gladly gave him all of their locations – no more Big Bad Wolf muddy paw prints in her house.

He stomped his paws and raked his claws all the way over to the first little pig’s studio apartment.

He roared through the door, “How DARE you take the Playstation??? This is WAY too far for me to travel!! I’ll have your chitlins for dinner for this!!!”

The little pig yelled back, “I don’t have the Playstation! I get it on Mondays and Wednesdays, and today is Tuesday!!”

The Big Bad Wolf yelled back, “If you don’t open up that door, I’m going to huff, and puff, and pick the lock of your flimsy door!!!”

The little pig squealed at the sight of his angry friend and fled the scene, leaving the Wolf to completely tear apart his house in search of the Playstation.

The first little pig ran to the second little pig’s Extended Stay Motel Room as fast as his little legs would carry him.

The Big Bad Wolf sped to the motel.

He roared through the door, “Are YOU the little pig who has the Playstation on Tuesday???”

The second little pig yelled back, “No! I get it for Friday and Sunday!!!”

The second little big yelled back, “Not by the finely manscaped gotee on my chinny-chin-chin!!!”

The Big Bad Wolf yelled back, “If you don’t let me in, I’ll huff and I’ll puff and I’ll go to that front desk and claim to be you and say that I accidentally locked my key in my motel room!!”

They didn’t let him in, so he huffed and he puffed all the way to the motel’s front desk, and by acting very worried and a bit flirty with the front desk girl, very easily got a key for the room.

The two little pigs already figured that he would be able to accomplish this feat. After all, he had fooled them into being friends with him. So they snuck away and ran to the nice little diaper row neighborhood that their brother had built his house.

They yelled through the door, “Let us in! Let us in! The Big Bad Wolf is tracking us down!!”

Their brother yelled back, “I’m sorry, but Mom sent me a book called “Boundaries for Pigs,” and if I let you in, I’ll just be enabling you and to keep sitting on your lazy Boston Butts!!”

The two pigs looked at each other. Desperate times called for desperate measures. “If you let us in, we’ll let you keep the Playstation EVERY DAY for a month!!”

The third little pig weighed his options. It was totally worth it. He opened the door and quickly let the pigs in, before locking up again.

It didn’t take long for the Big Bad Wolf to arrive. He banged on the door and said, “I KNOW you have that Playstation in there!!!”

The third little pig knew exactly what to do. He waited.

Sure enough, within half a second, his nosy, ancient, and very cantankerous next-door neighbor came, wielding a baseball bat in one hand and a cane in the other.

“I’ve already warned that little pig to keep it down over there ten times in two days!!!! I’ve had it!!”

And she chased that Wolf, with a *thwap* onto his head every time she caught up to him, right out of the cul-de-sac, down the street, and out of the neighborhood entrance.

…but before long, the first little pig got kicked off of welfare, the second little pig got locked out of his motel room and the front desk girl would ABSOLUTELY NOT give out another key to that room, and the third little pig got foreclosed on, and so they all ended up back at Mother Pig’s house, playing Playstation and Wii all day long, and getting tucked in at night.

And really, she didn’t mind, because the Wii wasn’t much fun by herself.

11 thoughts on “The Three Little Pigs: A Modern-Day Adaptation.”