I went through a phase of blogging where I was writing a bunch of disgusting posts.

That phase was called Diapers and Pottytraining.

Then, as that delightful stage of life came to an end, my posts quit being so gaggable.

And really, so did my life.

But yesterday, we had A Moment.

(Insert ominous-FOX-voice-overdub saying “Reader Discretion is Advised” here – you may quit reading if you’re not a fan of disgusting posts.)

Ali and I were in the car. The place that all out-of-control grossness seems to take place…

We pulled out of the driveway and headed for gymnastics. I heard Ali sneeze in the backseat. It sounded a bit more gurgly than normal, so I stopped at the stop sign, felt the back of my head for shrapnel, and looked back.

Sure enough, a big, nasty wad of snot was hanging out on her lip. She seemed oddly unphased by her new friend. So I wiped her up, looked around for more, found none, so kept on our journey.

We get to Gymnastics 20 minutes later.

I go around to the backseat to de-harness her, and as I reach in the backseat, I feel like I’ve just stuck my hand directly into Jabba The Hut.

I pull back, and my arm looks like a giant slug.

Surely I’ve just somehow managed to be transported back to the 80’s and have stuck my hand right into the middle of an episode of You Can’t Do That On Television….surely. 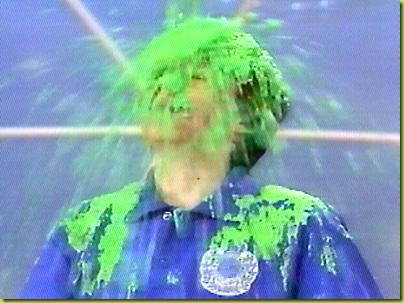 I start investigating the crime scene.

Everything is covered in a thick layer of snot.

It was as if a very large zoo animal – a camel, perhaps – or maybe a hippopotamus with extreme flu-like symptoms – had been in the backseat with Ali and had sneezed repetitively at a point-blank range.

There had to be some explanation. This carnage was absolutely not humanly possible from ONE sneeze.

3. Both sides of the carseat buckle.

7. The ENTIRE length of her left arm.

Of course, seeing as how I thought we were OUT of the disgusting phase of childhood, I had no wet wipes in the car.

So I began to mop of the goo as best as I could with kleenex, rubbing her poor arm red in the attempt to separate it from it’s thick layer of mucous, all while leaving a trail of torn tissue in my wake – because no kleenex could stand up to this sort of ZooMucus.

I finally get her dry enough to remove her from her slimy vat formerly known as a carseat, take her into the bathroom, and properly sanitize myself. Oh – and her.

Then start considering trading in my car.

I still haven’t found that camel in the backseat, but I KNOW it’s gotta be in there…that or Jabba himself.

19 thoughts on “An Original Spin on the Traditional Blowout.”