(I would normally start dancing a happy dance at this exciting point in Basketball Season, but really, my hubby didn’t watch too much of it this year, so I’m oddly not burnt out on it. But I’ll dance a happy dance for any of you that might not have been so fortunate.)

Apparently, my bracket fortune from last year was just that – fortune. I didn’t win any of the brackets this year, and the lucky winner of my bracket was Chris (who can’t really win a prize, seeing how he’s MARRIED to me), so the second place person wins the prize of the frames, which is Bethany. 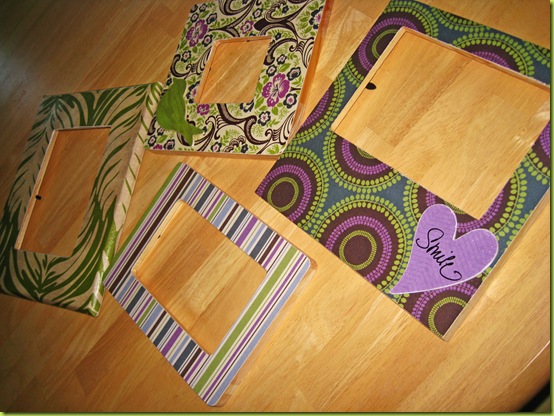 (In a dramatic ending nearly as exciting as the final game, Bethany and Greta were completely tied. I had to use the tiebreaker – the predicted final scores – to select a winner. )

And, the winner of the worst bracket entry by a child was David, son of Bethany!

(Apparently bracketing runs in the family.)

David wins one of these fun Monster Bowls: 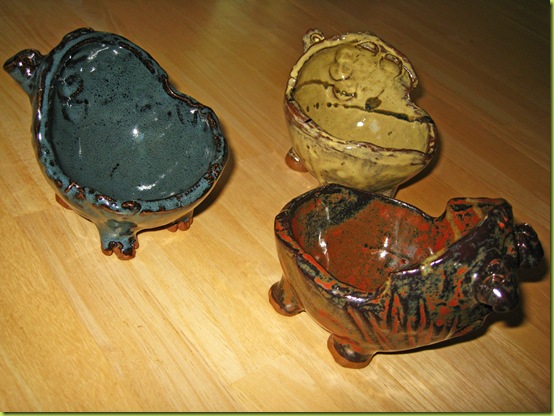 The other winner, from the Monster Bowls giveaway, is posted on my giveaway winners page today.

(If you didn’t win a Monster Bowl and want to buy one, check out Nathan and Katie’s Etsy Page.)

Anyway. Back to blogging.

My enjoyment of the bracketing process is purely for the geeky fun – not for love of Basketball. I didn’t watch a single bit of the stuff until Saturday night.

I found myself feeling a bit under the weather and exhausted to the point of delirium, and so, in an odd state of events, I actually laid on the couch and watched….Basketball.

Now, since I hate the sport, I had to occupy my mind with other things, as I lay on the couch ailing…

Like, what if I took my parenting strategies from Basketball rules?

(What follows are the thoughts from a very delirious me. No blame, intended or implied, will be accepted for the silliness herein.)

For one, Ali wouldn’t get in trouble until after she’d hit her friends five times, and then she’d be put in time out. But each time she hit them, they’d get one or two free shots at her (depending on the severity of her attack).

And then, to live in a world where dribbling is not only okay, but if you don’t dribble every two steps, you get in trouble?

I wonder if the Basketball Court is covered in drool…

Then I thought my silly delirium turned to hallucinations as I was totally distracted from my crazy thoughts by The Injury.

West Virginia’s star player, De’Sean Butler, hurt his knee. It was so heartbreaking, because he was writhing around on the floor, obviously in a lot of pain, and very disappointed, as he knew he was out for the rest of the game.

But then it took a turn for the weird when the coach came over.

He gets on top of De’Sean, and then nose-to-nose with him.

He pulls De’Sean’s face towards him, then starts stroking his cheek with his thumb, while passionately talking to him, mere millimeters from his mouth. 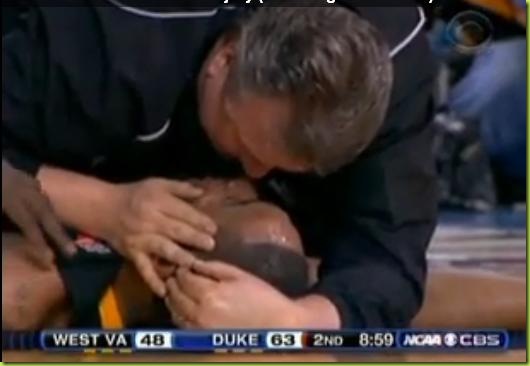 They talk, nose to nose, mouth to mouth, for WAY TOO LONG. The seconds tick by. The players standing around start to shift uncomfortably and look away. 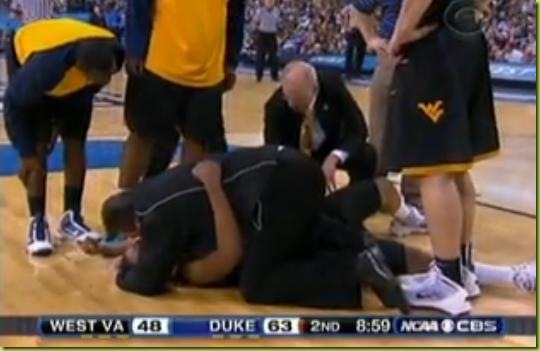 Aaand….I guess that’s why his name is Coach Huggins.

…..then it was sad again as Da’Sean got taken off the court, but the awkwardness.

It was like watching a real live episode of The Office. 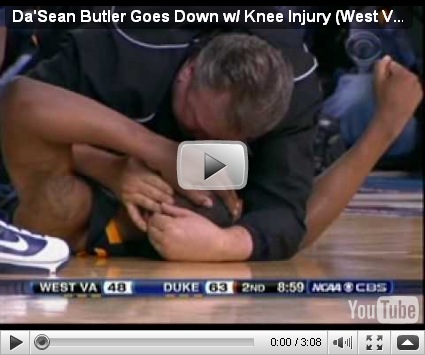 …And they lived awkwardly ever after.