Ali and I have The Flu. Swine? Maybe or maybe not. I’d rather not know.

The term Swine Flu brings back memories of my missions trip to Cyprus where I had the unfortunate timing to walk around a corner just as the doors on a meat truck were swung open to reveal a dozen gutted pig carcasses swinging in the breeze, hanging from the ceiling of the van.

I had the further misfortune of needing to continue my walk down that street while they unloaded them onto clothing racks and wheeled them into the butcher shop, wafting a horridly scarring smell in my direction.

Anyway, Ali came down with a fever Friday night, but had no other symptoms, so I figured she had another fever virus.

But, since she was feverous, she and I stayed home from Church on Sunday and let her rosy cheeks get some rest. 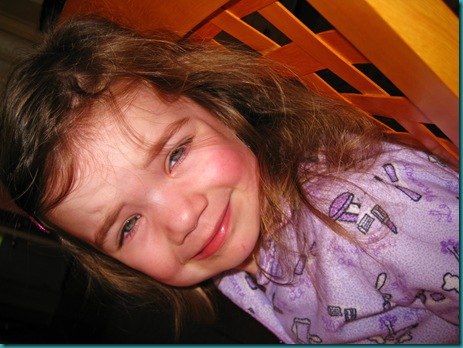 Which, according to her, required a self-constructed pillow bed on the couch. 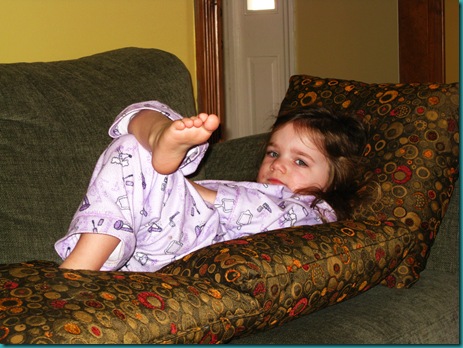 However, Cousin Eli had Ali’s same symptoms,starting at the same time, and got diagnosed with The Dreaded Swine Flu.

So then the question was, Ali’s doctor or my doctor? Or both? Ali woke up this morning feeling better, so I chose my doctor.

Which was awesome, because it allowed me to get to experience the Waiting Room crowd which included the Grandma who was reading Seventeen Magazine (which she brought with her – not a doctor’s office copy).

She apparently sensed that I was tweeting about her and got up and retrieved a Birmingham Parent Magazine, which she proceeded to wrap around her Seventeen Magazine and continue reading it.

THEN they called her back, and it all made so much more sense. Her name was Mrs. Madonna.

I also had the displeasure of seeing the guy in the waiting room that looked like he’d had a tiny explosive detonated in his eye. I really had to work hard not to gag every time he turned my way and looked at me with his SuperVillainous eye.

But then I realized that he wasn’t there to see the doctor, his wife was, whose only problem seemed to be a thong that stuck out way above her pants. I had a bit of Villainous fun myself imagining how much worse her ailment must have been than his bloody eye.

When Ali and I finally got away from Grandma and the Exploding Eye, I realized how sweet I had been to Ali to take MYSELF to get tested instead of her. She got to watch – laughing the whole time – as they retrieved two vials of my blood and shoved a Q-Tip up my nose to the end of my brain stem.

How nice am I?

Sure enough, my nose-to-brain-stem tissue sample came back Flu Positive. A round of Tamiflu for everyone – except for Ali – she’s too far past the point of catching it for it to do any good.

And so, now begins our complete and utter quarantine. By the end of the week, I should be hallucinating from the extreme cabin fever. Which may or may not contribute to my already senseless blogging.

19 thoughts on “I’m Officially a Fluzy.”