So I suppose I was “blogging wolf” a bit when I complained about my lack of Spring Break, because Chris and I did disappear for the weekend. Not for the Spring Break that we don’t have, but to celebrate our (ninth!) anniversary a couple of weeks early.

Ali happily stayed with Gramamma, where she got to do all sorts of magical things like buy new baby chicks and take care of them, make Noah’s Ark out of candy, and in general rule the household.

Our destination was an absolute monstrosity of a hotel, Opryland in Nashville. I always thought that Opryland was a theme park, but actually the theme park closed in the 90’s, and was replaced with Opry Mills, an outlet shopping Mecca, which I also enjoyed greatly.

(Sorry, all the children of the world. Shopping won that battle.)

But the hotel – it was amazing. There are multiple indoor atriums in the hotel with what seemed like entire towns housed in them. Our atrium had an amazing three-story waterfall, which happened to be right outside our window: 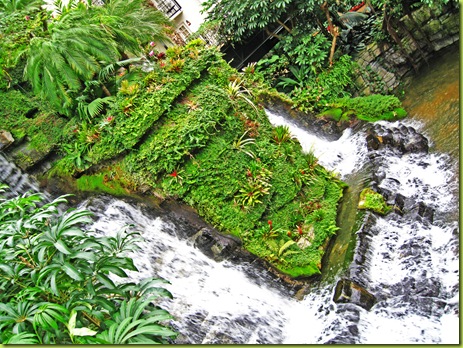 The hotel pathway went underneath the waterfall: 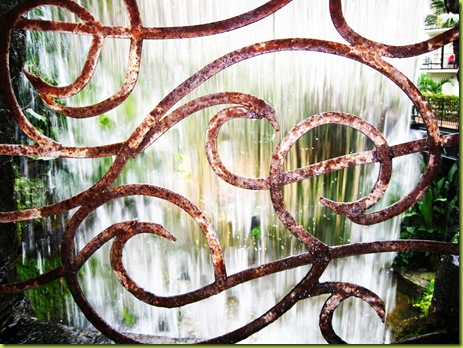 And there was a platform in front of the waterfall that moved, so that you made a complete circle once an hour. The effect was quite peaceful: As if that weren’t enough for our atrium, there were two entire restaurants on the other side: 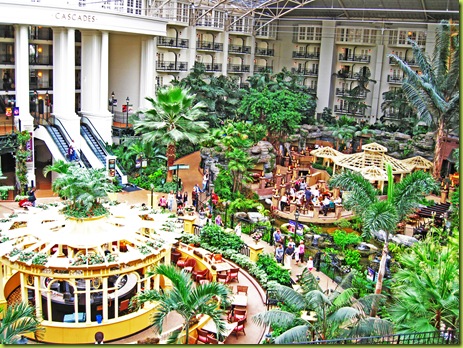 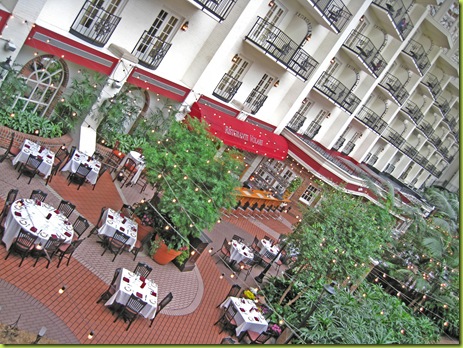 And the steakhouse, which looked like an Antebellum Mansion: 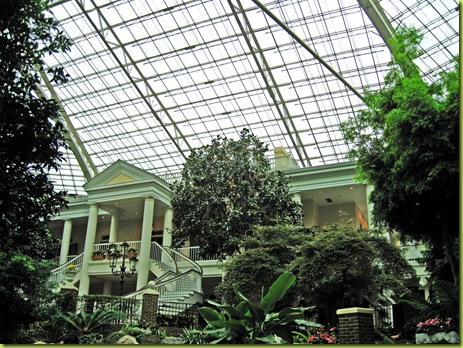 (Keep in mind, all of this was indoors.)

The scale of the place was amazing. I felt like I was in one of those huge developments in Asia that are always Most Extreme shows.

One of the Atriums had a moat around the middle part, 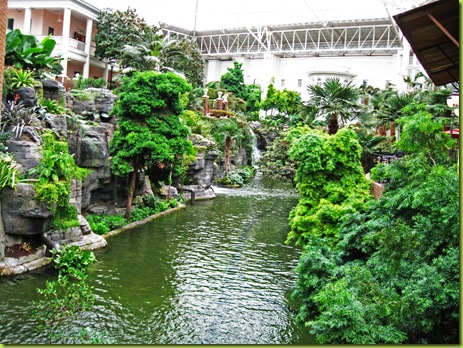 Which included a boat that toured the atrium. 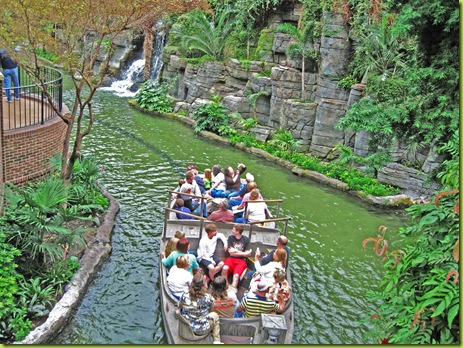 (Which we noticed was not boating at all, but on a track…more like a trolley. Oh well – why not a boat trolley?)

The sights were gorgeous, and the flowers and plants were amazing: 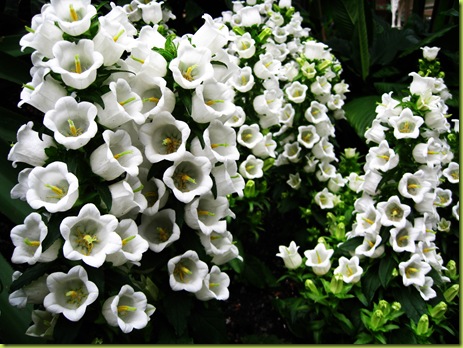 In our getting lost exploring, we also happened along the conference center, which was just as gargantuan in scale: 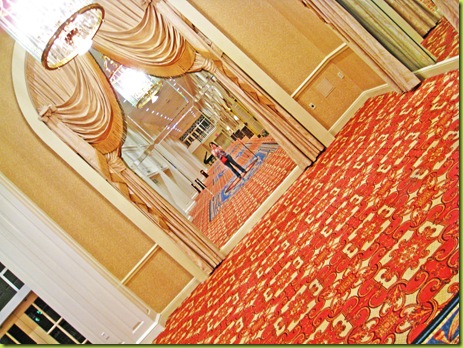 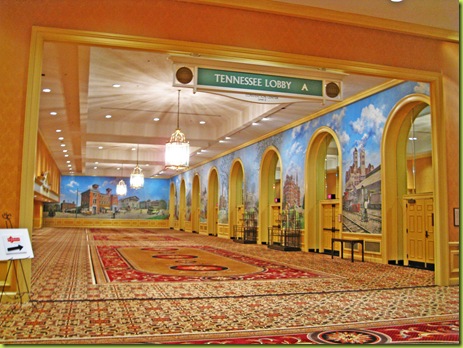 All in all, we found Opryland to be a great place to get away and spend some time together. 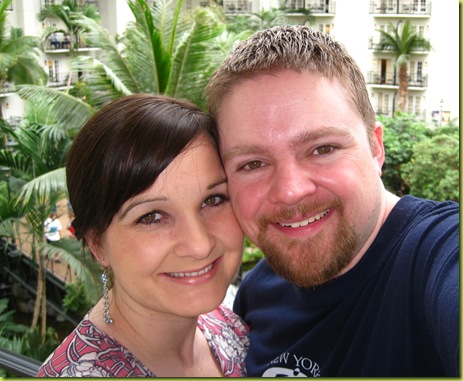 And, as I mentioned, Opry Mills was quite awesome also. It was an outlet mall, but it was all indoors, which was quite convenient for the weather of the weekend.

We did quite a bit of shopping, including a lot of Ali’s upcoming spring wardrobe. In my typical OCD-ness, the real fun was had when I got to calculate my savings rate after my purchases, which was 69% savings for the things I bought for myself, and 43% savings for Ali’s clothes.

I DO love outlets.

Besides the actual shopping, there was plenty to look at…

The candy made me drool: 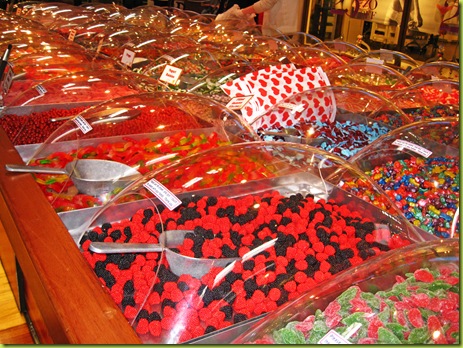 The bar made me amused: 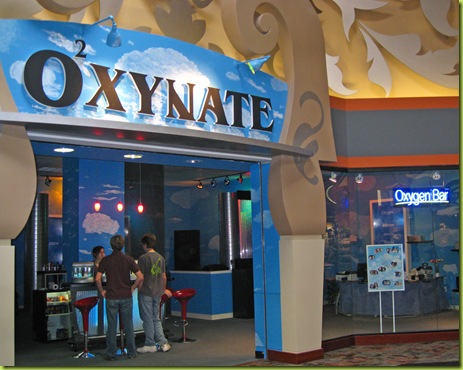 And the fashion made me laugh: 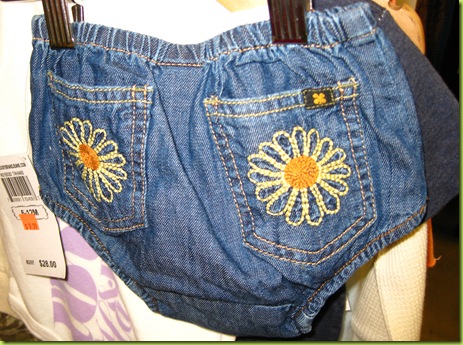 (I actually thought those were pretty adorable…if I had a crawling baby.)

I found these snakeskin leggings at Off Fifth (Saks’ Outlet), and just had to show how small the leg openings were. 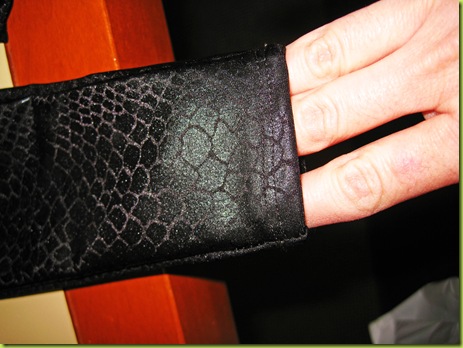 I’m pretty sure if I put these on my legs, They would act somewhat like the compression socks that my Granddad used to wear:

The mall also housed my ultimate in undesirable restaurant: 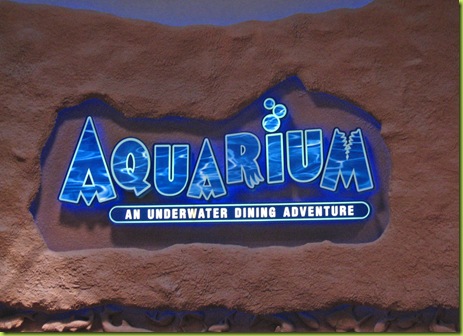 You see, I have a quirk about being eeked out if there are any aquariums at a restaurant where I am eating or could eat fish. It just seems…barbaric…to make them watch that.

This restaurant was a 360 degree aquarium “experience”.

They had the most awesome stools I’ve ever seen: 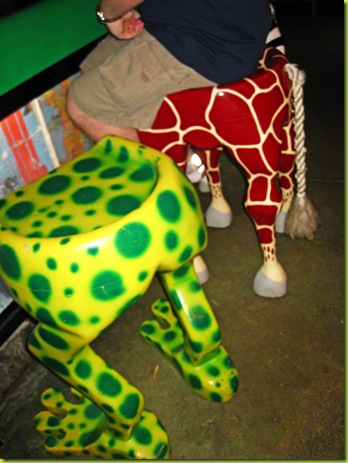 If I could buy those for my kitchen, I totally would.

And Chris makes a pretty cute top half of a Giraffe, too.

So, in the day and a half that we were there, we didn’t see or hear any country music (a travesty, I’m sure), didn’t really explore Nashville, but had a great time reconnecting with each other and relaxing – which was, after all, our main goal.

Oh – and the shopping. Good buys make me feel SO happy.