(You MUST try saying “High Eye” out loud. And really fast. And over and over. It’s quite addictive. I’ve been saying it since I typed it and JUST CAN’T QUIT.)

Remember Ali’s Scary Eye Trick that I banned right after shooting this video? 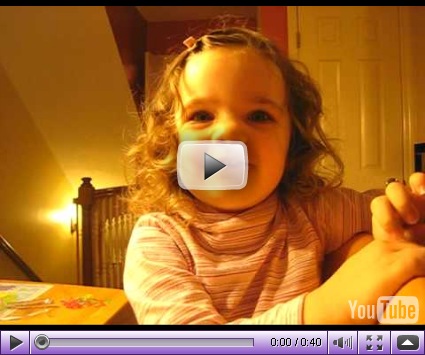 After she learned how to control her eyes independently and freak the entire world out, her left eye would, very rarely albeit, float inward on it’s own: 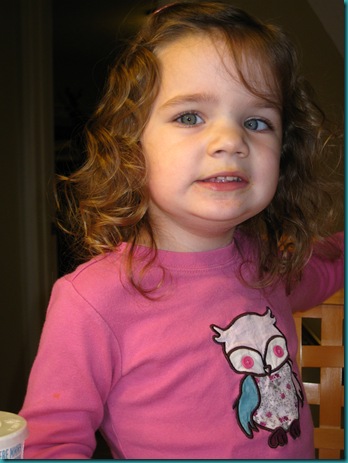 Okay, I think that one must have been on purpose, because the accidental ones are typically a bit more subtle, but you get the point.

Chris’ eye also does this every now and then when he’s really sleepy, or looking out of the corner of his eye. Also, I found out from his Aunt Kitty that hers did that as a child, as well as some other family members.

So I asked Ali’s Pediatrician about it at her three year old check-up, and she wanted me to get it checked out, especially with such a strong family history of the odd behavior.

(Ali got all of her Father’s family’s weird genes – she also has a huge dark freckle right above her left butt cheek that apparently can also be found on every butt in the family.)

(Don’t ask me how his family realized this and collected the data on everyone. I don’t know nor do I want to know.)

So I got an appointment with a Pediatric Ophthalmologist, and began dreading the day.

Besides the fact that the referred doctor was a man. Another strike against him.

Of course, I prepared her beforehand, and explained what all they would do. Luckily, she had just gone to the eye doctor with me, so I was really banking on that experience helping her be more comfortable with all of the contraptions herself.

But the man thing, she just couldn’t get past. She kept asking me, “Are you SURE he’s going to be a man? Do you think that she MIGHT be a girl?”

Ali was right in one sense – the eye technician did most of the work, and she indeed was of the female persuasion.

She had Ali read a picture eye chart similar to this one that my friend Marie sent me:

Except with no Christmas tree. I guess that’s been deleted for political correctness.

But that ridiculously ancient (80’s) telephone – it threw her off on every line. As IF she’s ever seen a telephone that looked like that. If it had been a flip cell phone or a smart phone? She would have recognized it right away.

Somebody needs to update the child reading charts to show an iPhone, a Leapster 2, a Flip Video Camera, a Garmin, and a laptop.

Although I think she would have done BETTER with the letters chart, she managed to convince her eye tech that she could clearly see all of the lines.

THREE DROPS IN EACH EYE.

AND OH – THEY STING LIKE A SCORPION BITE TO THE EYE.

I have never minded going to the doctor (although I pretended to hate it when I was little because I thought I was supposed to hate it but really I loved the attention but wanted my Mom to think I really needed to go and wasn’t just going for the attention) until I became a mother and had to hold my screaming child down.

However, I think that a couple of those drops had to have had marijuana in them. After a minute of recovery, she got so calllllm…and zoned…and giggly…and started eating her PEZ with two hands as if she had some mega munchies…

In toddler druggy slurred speech, she told me, “Hey Mommy, I thought I was sleeping in my big girl bed, but big girl beds don’t fit in chairs!! Silly chair.”

I REALLY knew she was high when the MALE doctor finally came in, and she just sat there, as if she were an adult, and let him poke, prod, move, and in general invade her eyes in every way.

They know what they’re doing with those eye drops. I just know it.

And, of course, she’s still not allowed to perform her Scary Eye Trick.

She was still eyedrop-high on the way home… 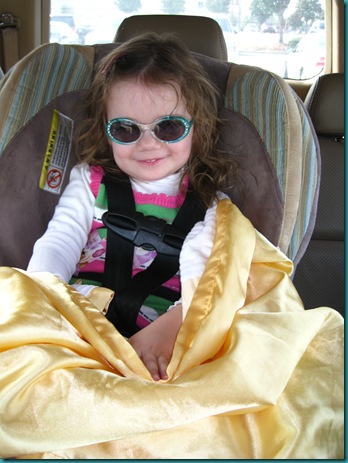 but found her “eyes to be too bright” to be outside. So she improvised: 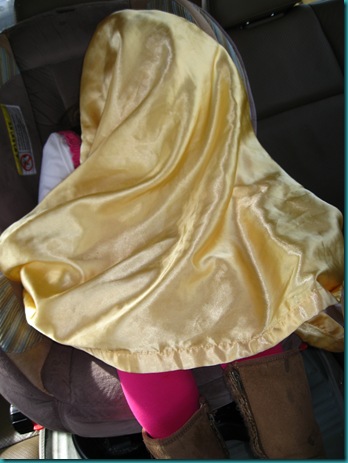 And THAT’S why Michael Jackson’s kid always had a blanket on, ladies and gentlemen – he was totally hooked on the Pediatric Dilation Drugs.