When I first learned to write, I wrote everything right to left, mirror image. Mom and Dad had piles of notes I wrote them that were completely and perfectly backwards.

(Okay, maybe not neatly, but easily.)

Mom always thought that I was mildly dyslexic as a kid, and even current day, every now and then when I’m writing, I’ll be thinking of the letters in the right order, but I’ll write them in the wrong order.

I always attributed my “uniqueness” to being left-handed, since we’re a pretty quirky bunch anyway. Until I had a right-handed child… 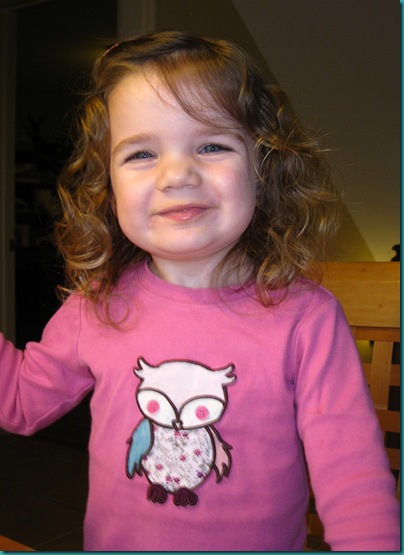 She hasn’t shown any interest in attempting to write letters until recently, but she’s always loved forming them (out of putty, necklaces, whatever is bendable). She also likes fridge magnets for spelling.

However, every time she puts her name on the fridge, she does this: When I ask her what it says, she says “A-L-I Ali!”, and looks at me like I’m ridiculously underqualified to be an M-O-M Mom.

Now that she’s finally interested in writing, I’m getting to see how backwards her brain really is: 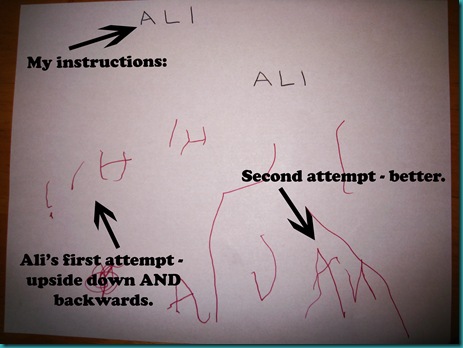 That’s right – she took my backwardness to a whole new level – writing backwards AND upside down?! I didn’t know that was even possible. She’s done this several times now, and it stuns me.

And no, I wasn’t sitting across the table (hence causing me to write upside-down and her trying to imitate me) – I was sitting right next to her.

Maybe we have some Arabic Genes in us – they write right to left.

Or maybe the Angel on that part of the baby assembly line accidentally picked up our brains out of the Arab bin instead of the American bin. They’re probably right next to each other if the bins are in alphabetical order, after all.

20 thoughts on “Somebody Read the Instructions Backwards When They Installed Our Brains.”