We got home late for naptime, so I was hurrying to get Ali in bed, and telling her that she needed to go straight to sleep since naptime was so late.

Also, I had to change her shirt, because she was wearing (in her words,) her “Blinkedy Christmas shirt.” 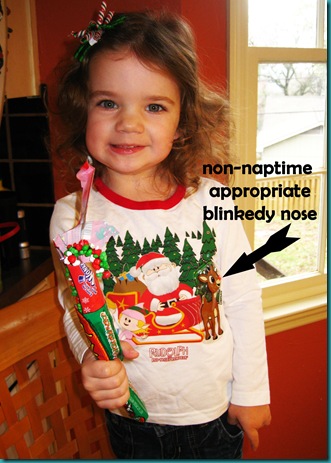 Had a very blinkedy nose,

Get in any naptime doze.

Sorry for that. It just came out. That’s the kind of stuff you get from live blogging.

Anyway, I was rooting around in her jammy drawer for a loose jammy shirt, and found a hand-me-down crushed velvet nightgown – something she’s never worn before.

It had princesses on it.

(Speaking of Princesses, be sure to check out my friend Christen’s HILARIOUS diary of babysitting Ali – Things You Learn from Babysitting a Princess.)

Back to the story.

She was beyond elated. She wanted to run and show Daddy. She begged me to let her wear it after she woke up, too. We talked about the princesses. I tried to hurry her to bed. I reminded her yet again – no talking, not even to the princesses. Straight night-night.

I came downstairs, and a friend called. As we were talking, I heard Ali on the baby monitor chanting something, quite repetitively.

Nice. So as I’m talking on the phone, I’m slightly irritated that she’s disobeying me and talking, and figuring that I need to go up there as soon as I get off the phone and tell her that I said NO talking.

I get off the phone and stop for a second to listen to what she’s chanting in her emotionless, monotone, repetitive voice:

I die. Laughing, of course.

I had completely undressed her and had gotten a pull-up out (still used at naptimes around here), but her excitement about the nightgown totally made me forget to actually place said pull-up on her backside.

Thanks to Ali’s good conscience, it didn’t end nearly as crappily as it could have.

Hi. My name is Rachel, and I put my two year old to bed with a bare butt.

10 thoughts on “Live Blogging From Rachel’s Stupid Moment of the Day!”