I love rabbits. I always have. I had several as pets growing up, and thought that they were just wonderfully delightful creatures.

We also have wild rabbits in our neighborhood. We can especially see them when driving home at midnight from Small Group – Ali and I always watch for them. They’re just beautiful, innocent, delightful creatures.

The Rabbit From Hell.

(He might have been related to Satan the Squirrel. Why do all of the evil animals find me?)

I didn’t even remember his real name, despite the fact that he lived with us for years, until I found a picture of him where my Mom had labeled it: Frolic.

Frolic was pretty much the antithesis of his existence. So we’ll just refer to him as I remember him: RFH.

It all started on Christmas day sometime in the very early 90’s. My little brother was very young (maybe 5 years old or so), and one of my Dad’s sisters and husband had quite the evil sense of humor. They apparently had been given or had somehow obtained this particular Rabbit From The Underworld, and decided to re-gift it to my little brother.

Because my parents couldn’t say no to a 5 year old that had just been given a pet, I suppose.

(I’m assuming that due to some earlier practical joke incident, my parents completely deserved this nasty treatment, but I’ve never been told the background.)

(Although now that I think about it, I DO remember a port-o-potty shaking and knocking over incident executed by my Dad to this Uncle. Could be related?)

Anyway, he wasn’t a fluffy, lop-eared, pretty rabbit – he was one of those Evil-looking, red-eyed Albino Rabbits: 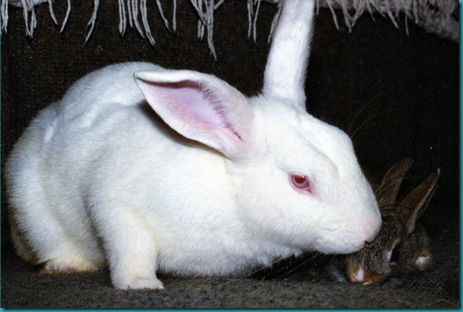 That’s him, smooshing my favorite baby bunny ever, Jasmine. We were introducing the two because we hoped to create more baby bunnies in a few months. However, soon after, we realized that Jasmine was not actually a girl, so that plan probably wouldn’t work out too well.

Lucky Jasmine. I think he might have willed himself to be a boy after meeting RFH.

Back to the story. It soon became apparent that RFH did NOT appreciate human company, and since my little brother was way too young to learn how to avoid his nastiness, I became the caretaker.

(Probably because I was the Middle Child.)

We set him up a cage in the back of the yard, as far away from human contact as possible – the way he liked it.

I fed him daily. It was a risky job – get the food in and the hand out as quickly as possible to avoid getting bitten or sprayed with rabbit pee (why do all animals feel that their pee is a weapon against me?!). Every now and then he would get the best of me, but I was able to get away quickly enough to minimize the damage.

But, one day, the inevitable happened. RFH won. He was quick enough to snap at my left index finger, very near the knuckle, and bit through.

It wasn’t down the middle or anything – it was on the side, but nonetheless, his teeth went through my finger, and I was stuck – I couldn’t pull away.

And, in that moment, RFH decided to pretend that he was a snapping turtle, and didn’t let go.

I’m pretty sure that I was his captive for around 30 seconds, but when you’re being eaten by an Albino Rabbit one digit at a time, it feels more like centuries of agony.

My Dad heard the screaming and ran outside. RFH finally let go, as he saw his fate flash before his eyes.

I quickly retreated into the house, trying to control the bleeding and keep my finger from letting go of my hand.

I saw through the window as my Dad “gently” put RFH into a cardboard box and drove off with him. I never discovered his exact fate, but I do hope that someone who enjoys rabbit stew was able to make a good home for him.

My index finger was never the same. For years, I had a huge knot of scar tissue, and although it has shrunk quite a bit, I still have the toughened scar on my index finger to prove the carnage that RFH brought to our home.

But, RFH didn’t make me hate all rabbits. As I said, I still love them. As long as they’re not fat, angry looking albino rabbits with exceptionally strong jaws.

17 thoughts on “Killer Rabbits: Not Just in Monty Python.”