First of all, I must say thank you for all of your comments and encouragement yesterday. I’m actually (gasp) GLAD I wrote that post now!!

Second of all – seriously?? So you all want me to write more POO blogs?!? 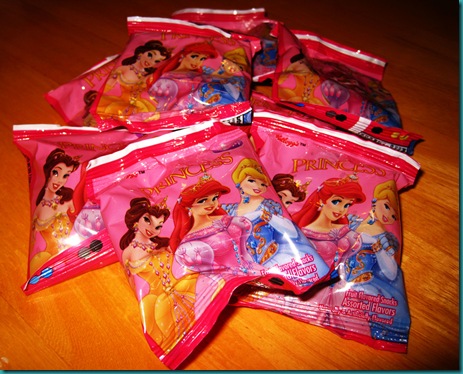 I could tell on Sunday that Ali was fighting the poo hostages again. She’d deny, then get THAT LOOK on her face, then deny and deny some more.

She managed to make it through to Monday, still stubbornly retaining.

So I made a big production of going to Target.

“What would you like – ANYTHING in the whole wide world – as a reward for when you poo-poo in the potty?”

(You can say these sorts of things to toddlers, you see, because the smallness of their world view coincides with the smallness of themselves. Don’t try it with your teenager, or you’ll be buying a brand new Cadillac Escalade. But I’m REALLY banking on the hope that they don’t need to be bribed to poo when they’re old enough to drive.)

It took me a minute, but I realized these were Teddy Grahams. Easy enough.

I found those, but on the same aisle, spotted what I thought could potentially be the Mecca Of Existence for a non-pooping Princess.

“Yes, she is!! And Ariel, and Belle, and Glass Slippers, and Pumpkin Carriages. . . .We’re going to get these for you to have when you poo-poo on the potty!”

She was excited, but she still managed to hold “it” firmly in place for several more hours.

Finally, it was naptime. I knew it was now or never.

So I sat her on the Princess-like Throne, and pulled out what I was hoping to be Poo Magic.

Her eyes got wide.

But she still firmly said “I don’t want to poo-poo.”

“Would you like me to open them and show them to you?”

I pulled out one of each variety and dramatically exclaimed over their wonderfulness.

“Can you pull them ALL out and show me?”

I pulled them ALL out of the package – Two Cinderellas, Two Ariels, a Belle, and Two Carriages.

That did it. She couldn’t resist the temptation any longer, and she broke her poo-less principles. She bent over, bore down, turned purple, and pushed with all her might.

We celebrated heartily. We had Princess gummies and Cookie Bear Crackers, and she inspected her work and gave me the rundown, a bit more grotesque than last time – this time it was, “I pooped a Daddy and a Mama and a Baby.”

But the REAL victory? It was unprecedented.

Today, no poops later, she needed to go, and all it took was mention of the Princesss Gummy Goodness in her future, and it was done – no days of arguing, hours of trying, and tears of completion.

TWO poos in a row. This is landmark.

I may be buying stock in Princess Gummies. I am SO happy with them right now that I don’t mind at all if I am still giving out Princess Gummies for Poo when Ali’s 16 years old.