I don’t know if the reaches of this phenomenon are national or if it is just local – I’m hoping that all of you can tell me.

(By the way, if it IS just local and at some point becomes national, I want this post to document the fact that Alabama can, in fact, be a trendsetter for something that has nothing to do with NASCAR, meth labs, or football.)

So what’s the craziness about? 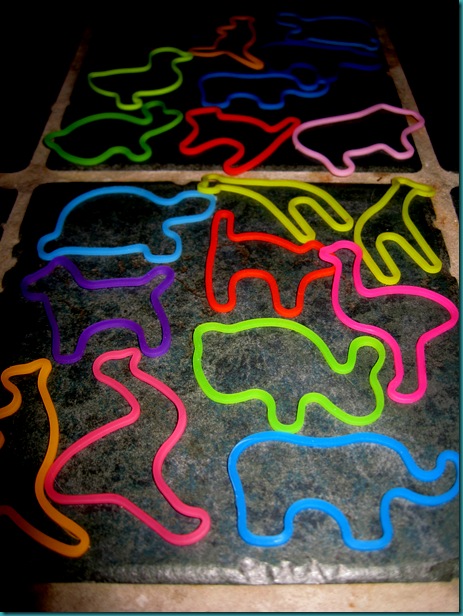 These charming yet simple bracelets, which can be bought* for the ridiculously cheap price of $2.99 for a dozen (* bought in the theoretical sense, of course, seeing as how they’re completely unavailable for purchase anywhere in this city), have kids from the ages of 2 to 17 COMPLETELY obsessed.

And a good percentage of the parents are also under their spell . . .desperately seeking them for their begging kids.

Signs on the store doors say “Don’t ask – we don’t have animal bracelets!”, or “We have an animal bracelet waiting list over a month long.”, or “You’d have better luck getting your own cat to wrap around your wrist than to find Animal Bracelets here!!”

Five year olds have now resorted to begging their moms to pack them extra school snacks so that they can trade them for a fix of bracelet intoxication.

In fact, Animal Bracelets are to schools what cigarettes are to prisons and mental wards: the most accepted form of currency.

The funny thing is, if you’re actually doing what you’re supposed to with animal bracelets (i.e. WEARING them), they don’t look like animals at all, but just a bunch of wrinkly bracelets: 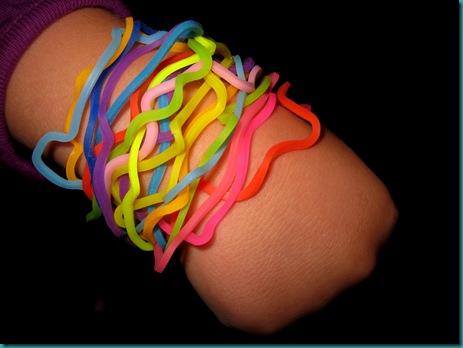 At least the jelly bracelets I wore as a kid hung on the arm right.

But I can’t deny the power of these magical creations. They ARE pretty darn cute: 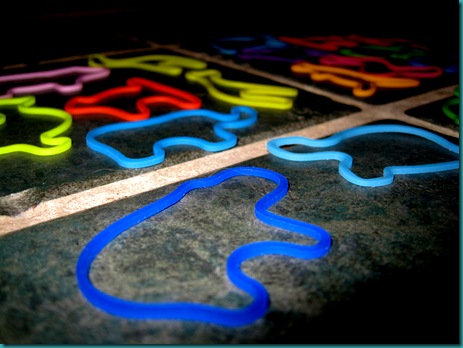 I actually happened to have bought some for Ali earlier in the summer before they became The Next Beanie Baby, or my poor child would definitely be going without.

(Who am I kidding? I’d be just as madness crazed as everyone else.)

Little does she know that High School girls would pay her big bucks to take them off of her hands. Unfortunately for them, she doesn’t quite understand the concept of money yet, so I’m pretty sure she’d rather have her pretty animal bracelets than dirty, wrinkled, green paper.

Of course, now that I’ve shown her stash on the internet, I will be locking my doors and windows extra tight.

What, you think no one would have the lack of heart to rob a two year old?

You obviously haven’t seen all of the addicts out there, wild-eyed and half-crazed, looking for their next fix.

Hey – maybe the Meth Lab operators will realize there’s a better profit margin and a greater pool of addicts in the Animal Bracelet market, make a few changes to their labs, and start a new product line! That’d be a decent trend for Alabama to start…

24 thoughts on “Market Recovery Ahead for Those Who Lost Their Fortunes in the Great Beanie Baby Market Crash of the 90’s!”