Chris and I are headed to have a little R&R at a B&B for my birthday, so I decided to leave you with a giveaway to pass the time!!

Disney re-released their first ever animated movie, Snow White and the Seven Dwarfs on Tuesday! The Diamond Edition set is a Blu-ray/DVD Combo – it has three discs – a regular DVD with a lot of bonus material, the Blu-ray movie, and the Blu-ray bonus material!

We don’t have a Blu-ray player yet, but I hear that the picture and features are awesome – and the discs are kid-proof and scratch-proof!

They sent me a copy to review this week, and I let Ali watch it – her first ever full-length movie. I didn’t know if her attention span would last, but she was completely mesmerized. She especially loved the “little men”, just like Mommy.

(In particular, she liked the one with a pink shirt – who happens to be Grumpy. One day, she’s going to have to quit picking her favorite people based on the colors they choose to wear. That just seems like a strategy doomed to failure.)

There were some “intense” parts that I had forgotten about (intense for a two year old, anyway), but they didn’t seem to phase her. I did decide to fast forward through a couple of the “scarier” parts, but I let her watch almost all of it. Just a couple of hours later, she was already asking me if we could watch “Snow White and the Little Men” again.

I think we may have a new favorite movie.

At any rate, I have a giveaway for you to celebrate this new release! It is the Diamond Edition DVD, coupled with the Seven Dwarf Plush Set, for a value of $79.99!! 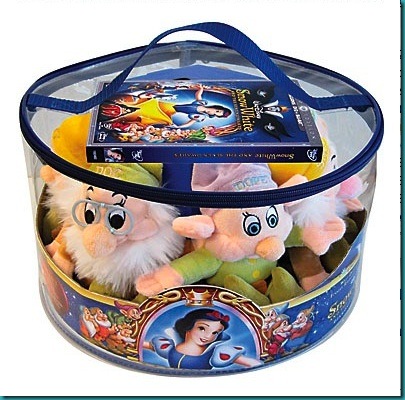 Aren’t they adorable?!? Luckily, this prize ships directly and not from me – otherwise, Ali might find the seven little men, resulting in your prize being delivered “slightly used”.

If you’d like to win this Snow White collector’s edition set, simply comment on this post! You can get up to three extra entries if you:

Best of luck! This giveaway is open until Monday, October 26th. The winner will be selected randomly and announced on Tuesday, October 27th.