I’ve been avoiding the question for about nine months now. But I can’t keep putting her off.

It’d be better if she heard it from me, her mother, than learning about it from some random kid on the playground.

Or worse, the weird old guy lurking in the dairy aisle.

I know that she thinks it’s disgusting, but it’s time that she understands what a beautiful thing it really is.

I don’t think I can keep my cover any longer, using her original assumption that brown milk is just some nasty, good-for-you, organicey, vitaminey milk that Mommy drinks because she’s old. 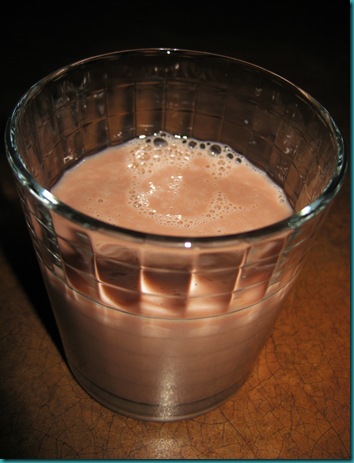 I ran out of her milk and juice last week. It was breakfast time and I knew she wouldn’t drink water. In a moment of weakness, I pulled out the brown milk.

Ali gasped. “I have to drink Mommy’s BROWN milk?!?”

She took about two sips and wouldn’t drink anymore.

Much like us adults cringe at the thought of what liver and chitlins* and tongue actually IS and so therefore don’t like to eat it, brown milk (to Ali) has an air of nasty ickiness that wasn’t won over by the indisputable taste.

Since she didn’t notice it’s striking similarity to chocolate due to her misconception of it, my continued deception could have been possible, had it not been for a serious oversight on my part. I made the mistake of tweeting the first part of the story without finishing it.

Daddy came home and said excitedly, “Did you get to try something NEW and YUMMY today?!?!?!? Did you drink Mommy’s BROWN MILK?!?!?”

This, people, is why full and complete marital communication is VITAL to parenting.

Thanks to my partial communication, she’s now quite interested in my brown milk, and very desirous of trying it again.

And so, after nine months, I believe the deception is over.

I don’t think I’m going to be able to hide any longer that brown milk is really the “C” word.


* For those of you who aren’t from the South and are wondering what chitlins are, believe me, you DON’T want to know.

12 thoughts on “The Birds and the Cows”