Chris and I had a “date day” Saturday – Ali went to Gramamma’s early in the morning and spent the night, so we had all day to spend together.

Ali, of course, was absolutely thrilled to spend the day and night with Gramamma, but for the first time in her life, she was quite curious and needing to know what WE would be doing while she was gone. For two days beforehand, I was grilled with questions such as,

“Where are YOU going to be while I’m at Gramamma’s?”

“What will you and DADDY be doing?”

“Will you still be at home?”

Chris and I each had our own theories on the motives behind her interrogations. I think she wanted to make sure that she was having all the fun and we were having NO fun while she was gone, just so that she didn’t miss out on anything.

Chris, the more trusting and naive optimistic parent, just thought that she cared about us and wanted to know where we’d be.

By chance Friday afternoon, I happened to see a blurb on Twitter, and then on al.com about a tubing trip down the Cahaba River. I’ve been wanting to go canoeing again for a very long time, and tubing sounded like a perfect way to spend the first half of our date.

Chris agreed, and so we hurriedly put plans together.

Fortunately, Chris, in all of his wisdom and pre-planning ways, remembered how important it is to have river shoes when doing a trip of any kind down a river.

Unfortunately, he didn’t remember until Saturday morning, in which we had very little time to obtain these shoes.

So, of course, we went to Wal-Mart. And, of course, as luck would have it, they had exactly ONE variety of women’s water shoes, and available in two convenient sizes: 5-6 or 11-12.

Since I wear a 7 1/2, I opted for the 5-6, and looked like a little Chinese lady practicing the art of foot binding: 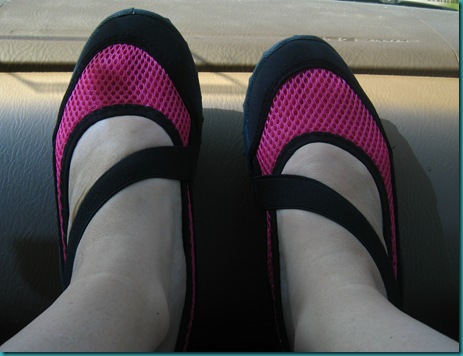 But it was WELL worth it. Those shoes helped me stay mostly uninjured on our trip.

So we arrived, and I left my camera and my phone in the car, after telling them that no, it was nothing personal, and no, I’m not deathly ill.

(They aren’t used to not being attached to me, poor things.)

The group comprised of eleven people, and all of the following pictures are courtesy of Matt Cuthbert, the Senior Producer at Al.com, and the person that I saw twittering and blogging about the event. And, because he apparently has a death wish for his camera, he actually took it down the river with him, and managed to take some awesome pictures.

Here we all are, trying to get situated on our tubes without being eaten alive by the quick-mud at the drop-in point: 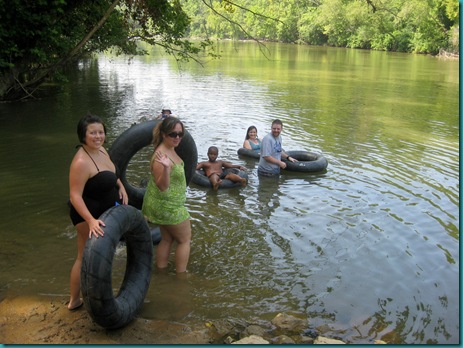 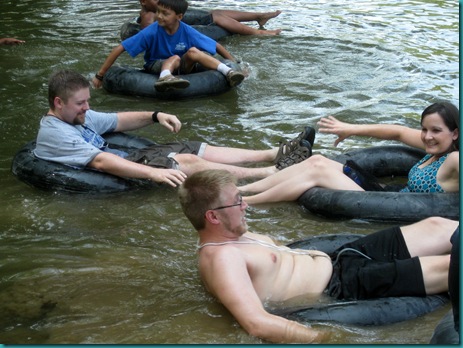 There were three hilariously entertaining kids on our trip. This one was determined NOT to get his butt wet on the trip, which is why he is sitting as if he has a hemorrhroid: 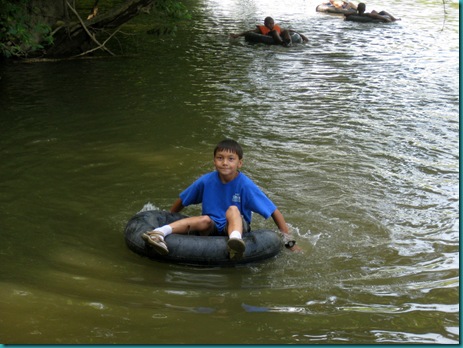 However, the laws of the universe require that if you’re the one person on a tubing trip that is trying to NOT get wet, you will be the one person that will fall in the river, immediately and repeatedly. 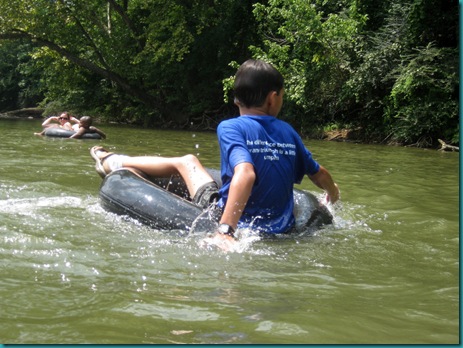 So we set off on our journey, 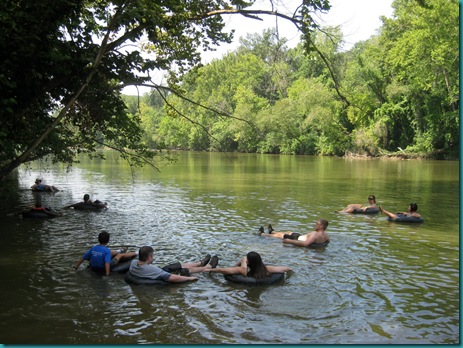 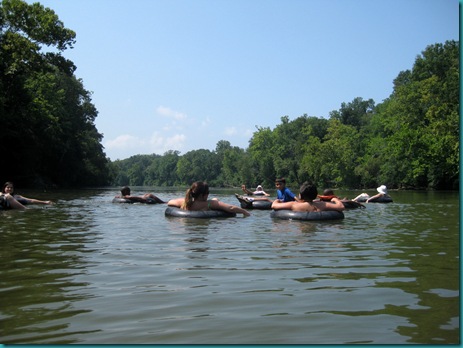 And not looking nearly as graceful as we thought we did. 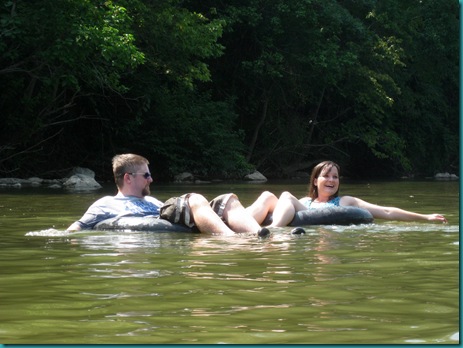 We had a lot of friends on the river – swarms of dragonflies. 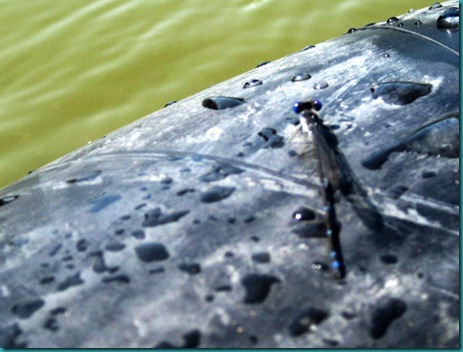 They liked to land on us, and most of them were, um, “attached” to another dragonfly friend, if you know what I mean.

At one point, a lonely single dragonfly landed on me, and I watched in amazement as he bent down his lower body in hinges so that the end of his body was touching my leg.

Then it started to sting.

And I didn’t find it quite as amazing.

However, in case you ever wanted to know, a dragonfly sting is quite mild and leaves no lasting welts.

The tubing adventure was full of long stretches of slowly moving river, 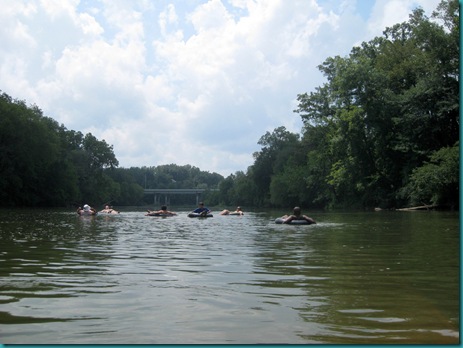 Interrupted by spurts of rapids and small waterfalls, of which Matt apparently liked his camera enough to not get any pictures of.

However, being that I am a glutton for adventure, I loved the small waterfalls.

(And when I say small, I really do mean QUITE small.)

After the first one, I learned that in order to not have your back opened by the rocks pretending to be can openers, you must completely stretch out on TOP of your tube as if you were on a luge, and basically slip over the rocks. Sometimes your tube would get stuck, but at least it was your TUBE getting hung and not your BUTT.

Here I am after just having come off of some rapids, still in partial-luge-position: 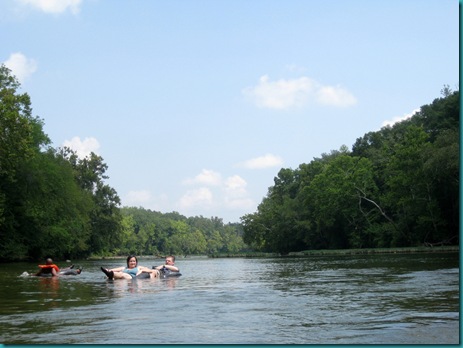 Another thing I came away with was a lovely Tubers-Tan. Or more accurately, Tubers-Burn.

See the glowing properties of my legs? 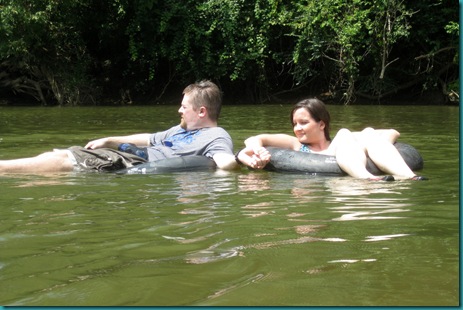 Yeah. From halfway down my thighs to halfway down my calves became quite toasted. Much more toasted than I realized, because I have really unpunctual skin: I burn AFTER the fact. So, as we were sitting through the third part of our date last night (Harry Potter and the Half-Blood Prince, if you’re curious), my legs got progressively toasty warm.

I bet you’ve never had the pleasure to sunburn in a movie theater.

But it was well worth it. Two and a half hours of floating along a beautiful river together is the PERFECT way to start off a date: 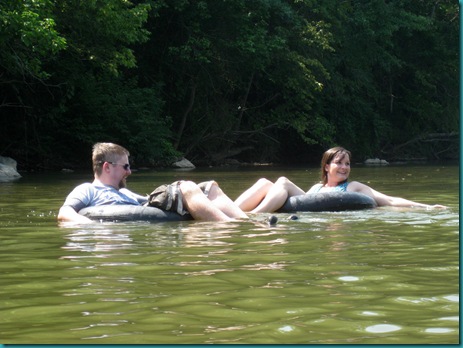 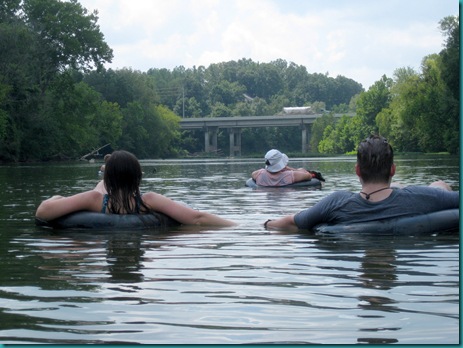 And Matt and Misty were an awesome host / hostess duo for the trip: 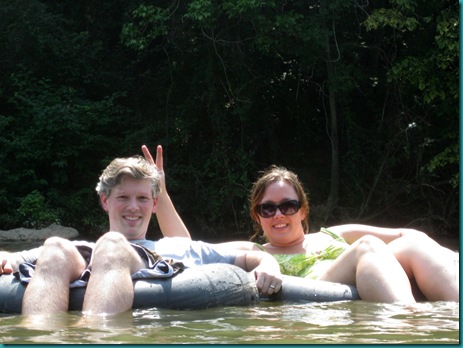 And overall, I must say that I am now totally sold on tubing. I may never canoe again. Because:

a) You’re in the water, not above it, so it’s a much cooler trip. Here’s Chris doing his head-cooling-off routine: 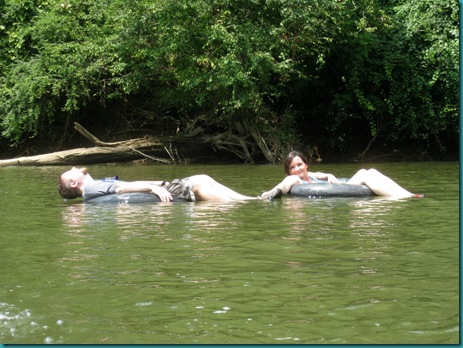 b) You’re not working as hard – no paddles, so you’re not about to absolutely die from exhaustion and upset about the fact that your arms fell off somewhere up river by the time you get to the end,

c) Tubes are QUITE comfy. Lounging down the river on a soft, pillowy tube rather than a hard, unforgiving bench is most DEFINITELY the way to go.

This trip was organized by Fresh Air Family, an awesome non-profit group that organizes events to help families spend time together outdoors.

It took place in Centreville, Alabama – about an hour out of Birmingham going towards Tuscaloosa, and the tubes/transportation/instructions were provided by Adventure Shoals for only $10 per person.