We headed down our familiar stretch of interstate today to our beloved Alabama Beaches. I felt GOOD because I was more prepared than ever to entertain my precious toddler for the drive. I brought brand new toys that she had never seen before, new books, plenty of snacks, stickers, and even painstakingly found all of Strawberry Shortcake’s accessories and put them in a nice neat little purse.

Everything a girl could want.

As I was preparing, I really thought it was overkill – she usually does great on our 4 hour jaunt to the beach. But at least I’d be prepared.

However, for some reason, she was more impatient with the drive than ever before, despite all of her new distractions.

Oh, the irony of my life.

So around halfway down, I was in dire need of a chocolate break, and I decided that maybe that was what Ali needed, too.

So I headed into the gas station, made my choice, and then went to get Ali’s favorite, M&M’s. But as I was reaching for them, I saw the tube of M&M Minis: 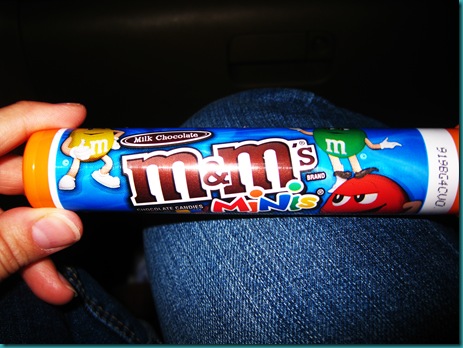 Perfect!! She loves to pour things, so she will have chocolate AND the ability to pour them in and out of a neat little tube. It just screamed “Hours of Entertainment!! Step Right Up!!”, so I even bought the mega sized tube.

(Why hello stupid. Why would you buy a TWO YEAR OLD a King Sized tube of chocolate? There goes my Smart Parent of the Year Award.)

Wait a minute. There was a lot of shaking going on.

I slid my finger down into her seat, and it came back completely covered in a thick, chocolatey goo.

At least it was chocolatey goo, as opposed to the dreaded Peanut Butter Poo Flu Goo. MUCH better than the alternative.

So we’re driving down the interstate, and my “trying to control the situation” self is turned around in my seat, desperately trying to contain the goo before it spreads to permanent levels.

They were EVERYWHERE. They had fallen down both sides of the seat, into every crevice and seatbelt hole, and there was a very large consolidation of them in her crotch. Smooshed and oozing, of course.

The console between Chris and I looked like this: 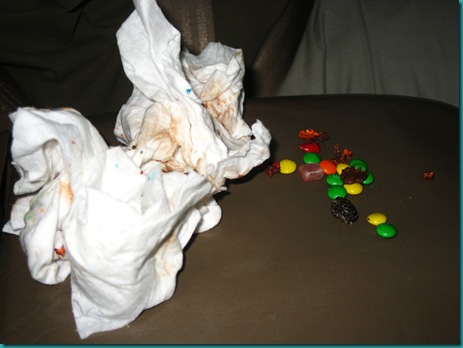 And AFTER I had contained the damage to the best of my abilities, Ali’s bum looked like this: 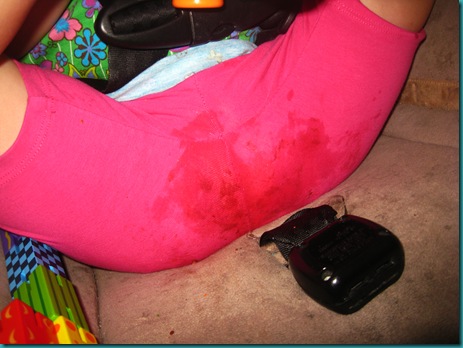 (Yes, I had two of her five harness points unbuckled in a moving vehicle. There goes my Safe Parent of he Year Award.)

So, she got the privilege of eating dinner with the dreaded brown butt: 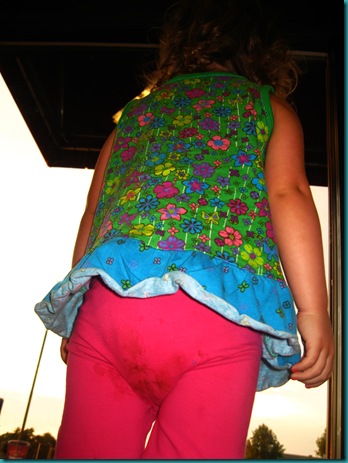 But it didn’t deter her in the least from enjoying her ranch dressing. 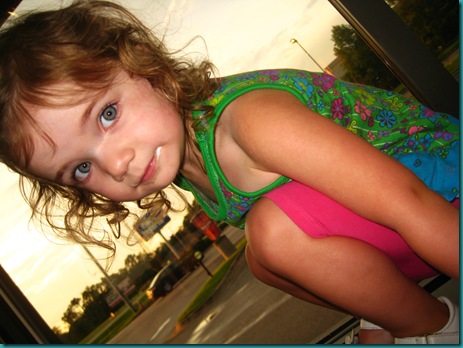 Bum-N-M’s. Melt in your Crotch, not in your Mouth.