I’m not one to condone making blogscuses, but I would like to state a disclaimer for the following blog post: My house is currently under attack by a parade of little gremlins. 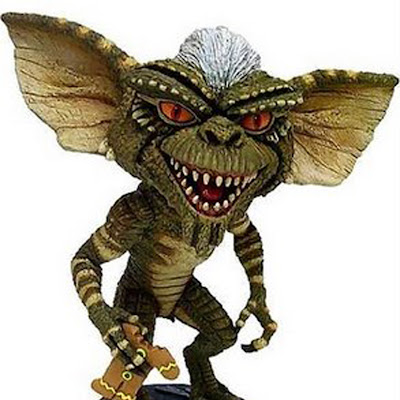 I was accosted over the weekend by the Emergency Dental Pain Gremlin, and I must say that the Weekend EDP Gremlin is MUCH worse than the weekDAY one, seeing as how he enjoyed tormenting me with pain-like-when-the-dentist-drills-into-my-not-yet-numb-teeth every time I tried to ingest any substance until said Dentist opened on Monday.

Luckily, my “rooty-tooty” Dentist must have realized that I had already done my Penance of Pain, because he went ahead and double numbed me before pulling out his torture devices (he usually likes to give me a test drill or two before doing it right, hence how I know SO WELL what it feels like to have my teeth drilled un-numbly).

However, the result of the double numbnation was being numb UP THROUGH MY NOSE all day Monday. Which makes it really hard to tell if you have anything hanging OUT of your nose, for the record.

Chris has been attacked by the more-work-that-you-can-shake-a-stick-at-right-before-you-go-on-vacation Gremlin. (Have I mentioned we’re going on vacation? Oh, sorry. We are. Today. But don’t worry, I’ll be around all week.) Poor guy has been working like crazy trying to get it all done, and is still working in the basement as I write this blog post (late Tuesday night).

Well, you really don’t want to know the gory details of her Gremlin’s disastrous wake, seeing as how it made Chris dry heave and have to finish his fatherly duties with his shirt pulled up over his nose, but let’s just say she’s been attacked by the Peanut Butter Poo Flu Gremlin.

Which also had a weird and completely unrelated side effect of her waking up with a black eye yesterday morning. It drove me absolutely crazy all morning because I could not recall a single injury that might have caused it (especially since she Does. Not. Get. Hurt. Ever.) I even called my Mom and tried to ask in the most non-accusatory way if Ali had done anything when she was at her house that could have resulted in a black eye.

Now please understand, I didn’t mind at all that she got hurt – because I’m cold like that, and a kid’s gotta get hurt sometimes, right? I really just wanted to quench my annoying curiosity of WHAT CAUSED IT. Because there’s nothing more annoying than a bruise of which you can’t recall it’s precipitating event. And, since my bruises are like my sunburns and very late in appearing, I often wish I kept a bruise journal. It would be very helpful, like other unnecessarily detailed record books which I might or might not have kept in the past.

Anyway, so her purple/red eye got darker and darker as the morning went on, and then, at lunchtime, in a flash, it completely vanished.

So, the moral of this story is: Apparently there’s a virus going around that causes a complete lack of appetite, zombie-like behavior, Peanut Butter Poo, and Magically Vanishing Black Eyes.

Sounds like something out of Harry Potter, available for purchase at the Weasley’s joke store.

However, one more side effect of this intriguing Peanut Butter Poo Flu Gremlin is deep thoughts.

As we were traveling to take a meal to JC, Lindsay, Eli, and new Baby Tessa Kate Monday night (before I really realized that she was potentially sick, for the record), Ali was philosophizing in the back seat about the upcoming dinner.

“Tessa’s older than my snot.”

(silence, interrupted by stifled giggles in the front seat.)

“Tessa’s older than my cheese and crackers, too.”

I’m pretty sure that she’s right on the snot account, but I’m thinking that there’s a good chance that her oh-so-preprocessed Lunchables Cheese and Crackers MAY have been sitting on the grocery store shelf a tad longer than Tessa’s been around.

In fact, maybe that’s where the Gremlins came from.