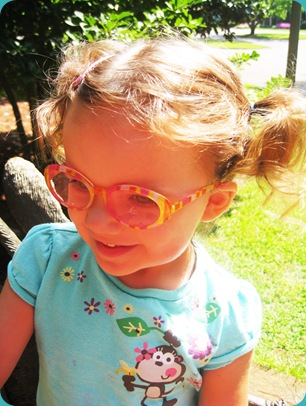 I have been in a constant state of bliss over the past couple of days, simply because I feel like MYSELF again.

It’s amazing how thankful it can make you to simply feel “normal” again when you suddenly and quite dramatically don’t feel normal for a few days.

(Which definitely proves the point that sometimes the lows in life are good, if for nothing else to make you truly appreciate the highs.)

Before I felt better, Ali’s bedtime had been a particularly stressful point for me. I had been so ready to be DONE WITH MY MOTHERLY DUTIES FOR THE DAY that I was stressed by the whole process. Plus, I had the mouth ulcers that made it nearly impossible to talk, let alone to do our usual singing routine. Although Chris had been very gracious and offered to handle it all by himself, I of course forced myself to participate, bad attitude and all, because of the guilt I would heap upon myself had I shirked my duties.

So with my mouth ulcers and my medicinally caused mood swings finally gone, on Tuesday night I told Ali joyfully that I could sing again. She was thrilled and also thankful for life to be back to normal, and so she was willing to sing along with me with more gusto than usual.

And, as usual when we sing that song, she then wanted to sing more verses of her choosing: “Jesus loves the little Alis”, followed by a long list of verses about other people Jesus loves: Mommies, Daddies, Tessas, JCs, Lindsays…

Then, when she ran out of people, she moved on to body parts. By now, I would have usually wrapped it up and put her to bed, but I was truly living in and appreciating the moment for the first time in several days, so I let her keep choosing new verses. We sang “Jesus loves the little mouths”, then eyes, then nose, as she tapped the proper part on my face, nearly never to the beat.

Finally, before the nose verse, I told her that it would be the last song of the night. Which of course meant that she would beg to do another one as soon as it ended, and I would have to stick to my guns and tell her no.

Sure enough, after the last line, she bent her head over, looked up my nose, and requested, ‘”Can we sing Jesus loves the little bogeys?”

I don’t know if she saw one up my nose and that’s what gave her the idea or not. Maybe I don’t want to know. But I was so caught up in a fit of giggles that I just had to agree. And so we sang, with zeal, as she tapped her finger UP my nose,

And we might should have changed the third line to Green and Yellow, Clear and White,

But it was most definitely a moment of euphoria.

12 thoughts on “The Euphoria of Being Oneself.”