Being that Independence Day is on Saturday, us, along with most of the rest of the (lucky) world also had Friday as a holiday. Which is the best sort of holiday: a holiday with absolutely no strings, plans, or anything else attached.

So we started out by going back to Spring Valley Beach, and took along our friend Amanda. This time, instead of lambasting Ali with sensory overload and trying to make her experience all that they had to offer, we just sat up our chairs next to the shallow side of the pool and started out by basically “ignoring” her, letting her decide exactly when and how she would enjoy the water.

And I must say, that worked AMAZINGLY better. We had a completely happy, albeit not watersliding, toddler then entire time. 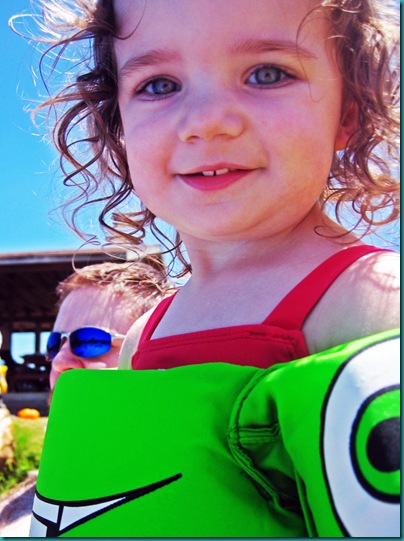 She started out playing with her cups, but instead of only being brave enough to do that like last time, she taught herself (and Chris) a new game that she explained to us was “fishing”: 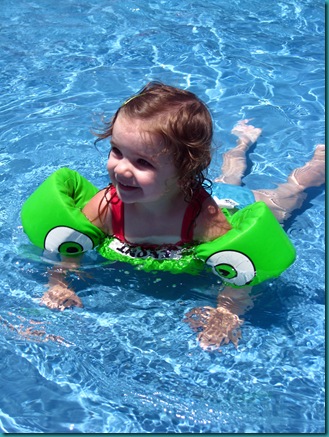 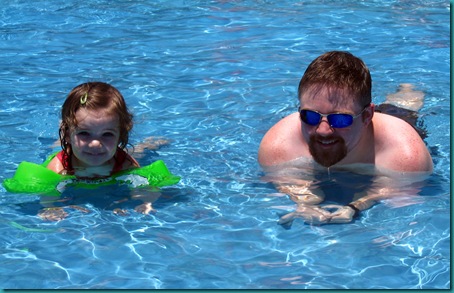 (which gave me this awesome visual image that she must have every time her Uncle Leo or some other burly man says they’re going fishing: she envisions them, floaties safely in place, creeping along the floor of a shallow kiddie pool. I love how toddlers think.)

We were lucky enough to get a “neighbor” by our pool chairs, Starlet: 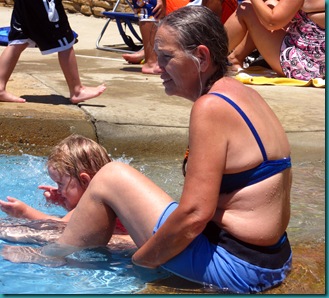 Or, at least that’s what her butt announced: 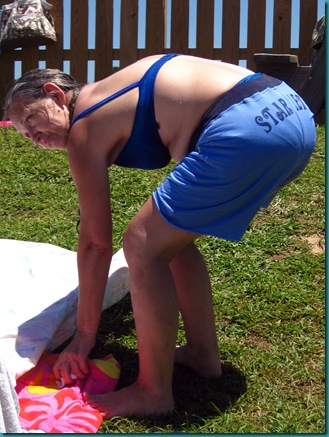 If you’re going to have writing on your butt (which, in general, I REALLY don’t recommend), at least be able to live up to it.

Which means, of course, that people with “juicy” on their butts are, in fact, allowed to have a bit more of a, well, chunkier rear to live up to the term (which always makes me giggle, by the way. You never see a skinny-butted girl wearing a pair of “Juicy” shorts).

But Starlet? You really need to look good to advertise that on your derriere.

That evening, we sat out to the mall to do a bit of shopping and continue our great magical perfume hunt. My wonderful friend and consultant-of-all-things-cosmetic, Barkley, used our new lead from last week and made us a list of perfumes to sniff out.

So we set out to Sephora, list in hand, and started smelling. And, every time that Chris found one that “might” be it, he chose a limb and sprayed me. Then marked it down on our legend-of-odors-on-Rachel’s-body.

So by the time we left Sephora, I was sporting FOUR different scents, properly notated as to where they were for future reference. My eyes were watering, my nose was stuffing. . .
But it’s all in the name of research.

(Sadly, none of them have been officially recognized as “it”. However, Right Leg is currently the front runner.)

We of course had to make a stop at the Hot Dog truck for Ali, and while doing so, AJ’s Grandparents walked up and we stood and talked for a bit. About halfway through the conversation, I remembered my extremely odorous presence, and quickly explained and apologized of my Pigpen-from-Charlie-Brown-like aura of perfume. They SAID they hadn’t noticed, but I’m thinking they were most likely being very nice.

I also had to explain to them why we were taking this picture when they were walking up: 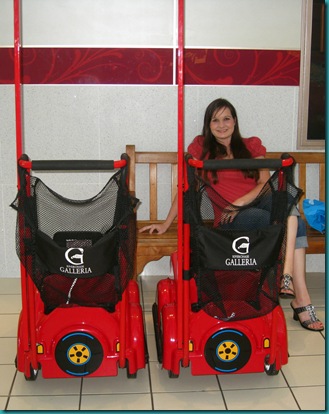 (I’m sure after all of these awkward explanations of my strange behaviors, they walked away thinking I must be one of those “quirky” friends.)

But, let me explain.

We’ve started a new hobby when we go to the Galleria. See, they have these car-stroller-thingies that you can pay $5 to rent. Of course, I’m way too cheap to ever rent Ali a car. However, people abandon these cars at mall exits (as opposed to returning them to the locking docking stations). So we have started “adopting” these abandoned cars.

And, on top of that, you get $1 deposit back if you return it to a docking station.

So, not only is Ali getting to ride a car for free, we’re getting PAID to let her ride in them.

So, this mall trip, we REALLY got lucky, and found THREE abandoned cars (previous picture was me with car #2 and #3).

Yup, we made three bucks. 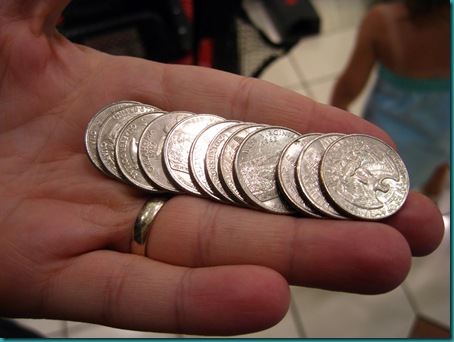 Oh – and as I’m writing this post, it’s past midnight, and I am STILL being knocked over by my horribly mish-mashed perfumery presence.

11 thoughts on “How To Spend a Non-Holiday Holiday.”