So if you’ve been around for a while, you might remember that my husband has a crush. If not, go click on that link and catch up. The basic idea is that there is a perfume, somewhere out there in the world, that my husband smells periodically, and finds it the most romantic aroma in the world.

So, obviously, I NEED this perfume.

We searched high and low for it at Christmastime to no avail. And, as luck would have it, he hasn’t smelled it since (as he has told me that he now understands the gravity of the situation and is willing to ask a perfect stranger, at the risk of looking like he’s trying to pick her up, what perfume she is wearing).

However, we have our first clue in this treasure hunt of alluring aroma.

We had dinner at David, Ashley, AJ and new baby Tessa’s house Monday night. Chris met us over there after work, so we were in separate vehicles. When he got home, he told me, “I have a lead.”

He then went on to explain to me that on his way home, he was “picking his nose or something” and he caught a hint of whiff. . . very similar to THE whiff.

So he told me that I MUST call Ashley the next day and find out what kind of soap it was in order to help us in the narrowing down of scents to identify THE scent.

So I called Ashley, she laughed (obviously), and told me that it was Pink Dial foamy soap, but she didn’t know the flavor. I remembered that it was a funny shaped bottle – not the traditional Dial foamy soaps, of which we have all over our house.

So, with knowledge of color and bottle shape in mind, I set out on a search.

And then finally, on my FIFTH stop in the search for Pink Dial Foamy Soap, I went to Wal-Mart.

And there it was. Standing tall like the Holy Grail of Soap: 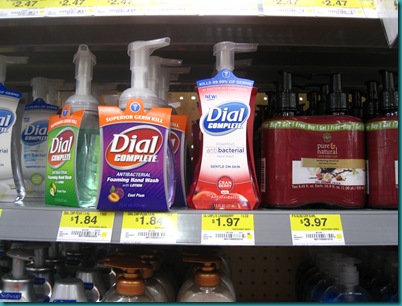 I of course bought three bottles. Because one, somehow by buying three bottles, it made FIVE stops seem more justified. Two, because if it takes that long to find it, it must be worth buying in multiples. And three, because it was under $2.

So I brought it home. I stared at it: 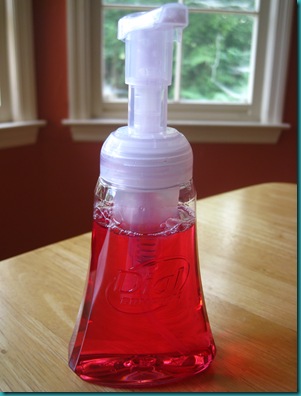 Could this innocent looking bottle be the secret key to unlocking the mystery that has haunted me for half a year?

I washed my hands and smelled it. Nice, fruity, relaxing. Sure – I could wear that.

Then when Chris got home, he washed his hands. He smelled it. He said it needed to wear off a little first. He continued to smell my hands and his hands at 30 minute intervals throughout the evening.

Finally, he declared that this was, indeed, the same soap that Ashley had, and it could, indeed, be a clue.

So what’s the next stop?

Well, I suppose we find the snootiest, most high-falutin’-est perfume counter lady in Birmingham (or a special trip to Atlanta, perhaps?), walk up to her, squirt $1.97 soap in her hand, and say, “Find me a perfume zat smells like zees.”