We have been discussing whether to get a trampoline or a swingset for a while now. We finally decided on a trampoline because:

a) Ali really seems to love all things gymnastics.
b) We can play with swingsets at any park.
c) It was surprisingly much cheaper that a swingset.
d) Chris had one growing up and loved it.
e) I always wanted one growing up because I wasn’t allowed to play on them.

Which brings me to an interesting aside. I find parental safety rules quite hilarious, because all parents have different (and quite contradicting) ideas of safety.

For instance, Chris had a trampoline. I wasn’t allowed to even jump on them because my Dad deemed them unsafe.

HOWEVER, Chris would have NEVER been allowed to ride on a motorcycle with anyone, yet my Dad would take us flying, airborne, and WAY faster than the speed limit on his motorcycle.

Granted, he also taught motorcycle safety courses and had ridden as a policeman on a motorcycle. I don’t know if that makes it safer, or if it just makes it more ironic.

Anyway, you get my point. Parents are funny. And I can’t wait until we’re old enough to have opposing safety regulations with Ali’s friend’s parents. I can hear it now: “But Mooooommmmm, AJ is allowed to ride HER skateboard in the road!!!”

So. Back to the trampoline. We finally bought one on Friday night, in the box, and decided that we would put it together Saturday morning.

Of course, Ali woke up Saturday morning, and the first thing she said was, “I would like to jump on my trampoline now, please.”

So to help pass the time for her and hopefully keep her entertained, we got out her pool and a ton of pool toys, and set her up to play: 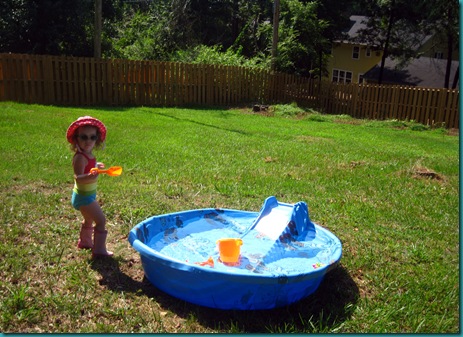 Which was, I’m pretty sure, the most brilliant move we could have made. She can play in her pool, by herself, for hours.

Or, in a more mathematical equation, she can play in her pool for the exact amount of time that it takes two people to assemble a trampoline, minus 15 minutes. And those last 15 minutes will be sure to be filled with exclamatory statements of exactly HOW VERY DONE she is with her pool. 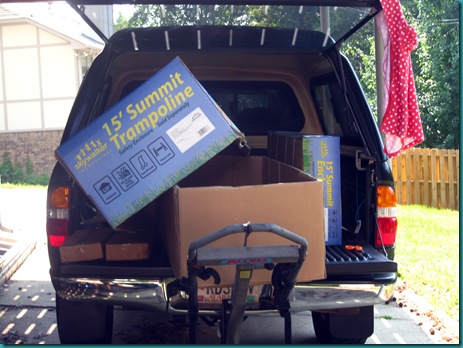 And included a very intimidating 96 springs: 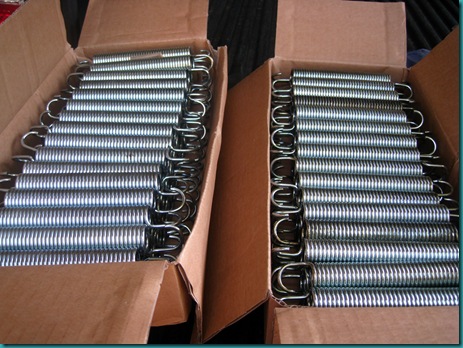 Chris and I got all of the base pieces laid out: 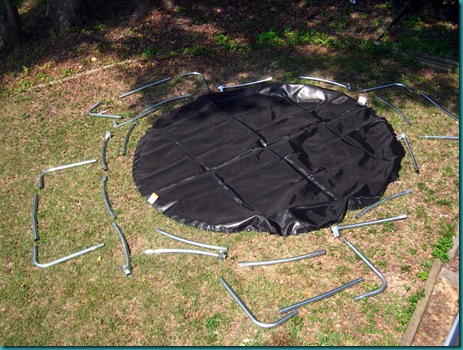 While Ali was quite happily and uncaringly playing in her pool. 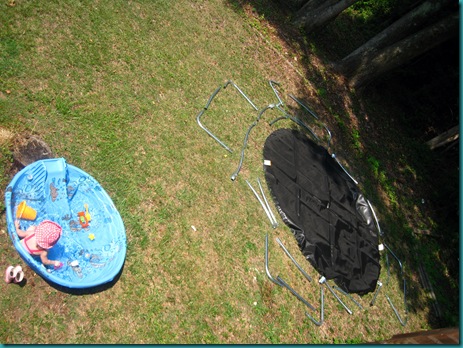 Then we began assembly. 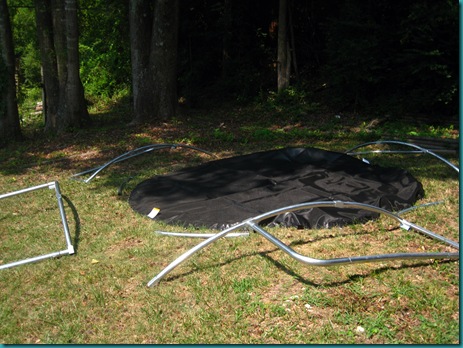 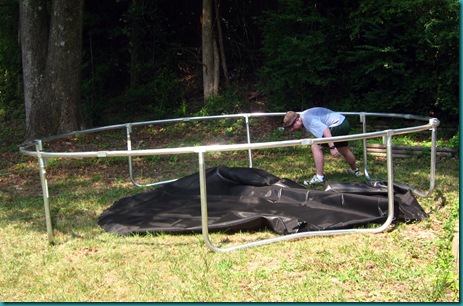 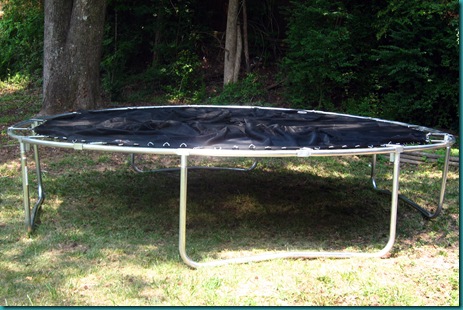 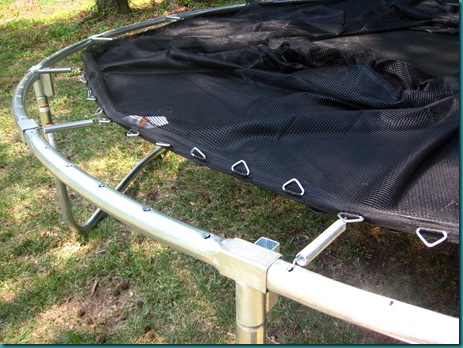 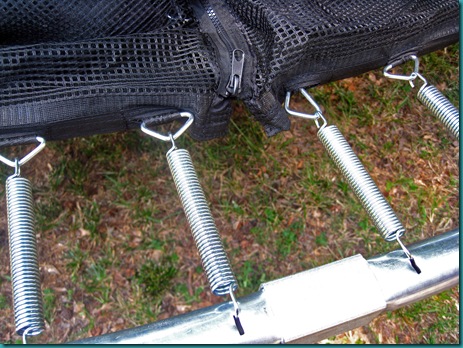 We worked great together as a team. We did the springs together, the legs together –everything. We were feeling really proud of our teamwork, until we realized that we made one tiny little mistake. . .

We put the netted enclosure on inside out.

To fix it, we would have to undo almost the entirety of our last two and a half hours of work. Undo every spring, every eyelet hook-in. . . all of it.

Luckily, I’m married to an engineer. And if there’s one thing engineers know how to do, it’s how to engineer AROUND a screw-up. So he figured out a workaround, and we went with that.

So don’t come over and sue us because our enclosure is inside out. You WON’T be invited back.

We got it all put together, and, like a good Daddy, Chris gave it the first test jump: 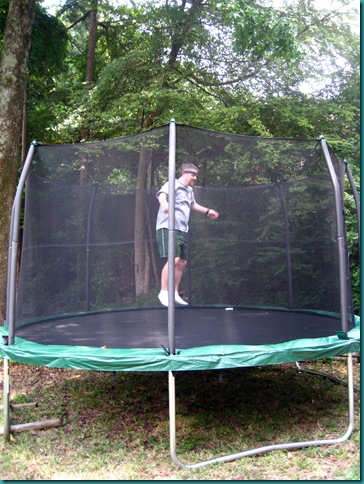 And when it was deemed safe, Ali and I gave it a try: 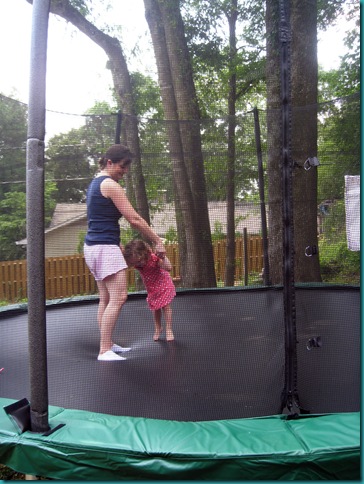 As much as she is obsessed with jumping in her bed, she got a bit spooked.

That always happens after we expend amazing amounts of energy to make something special. So we sat, and laid on it, and took our time. . . 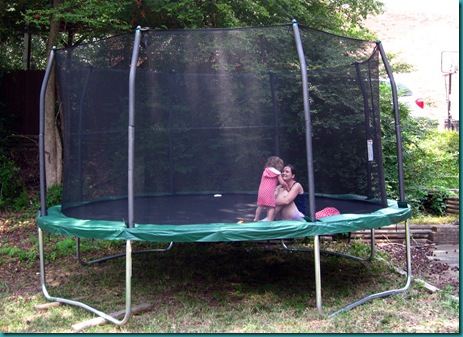 AND we didn’t let her off when she begged to get out.

And sure enough, in about 10 minutes, she was having a perfectly glorious time: 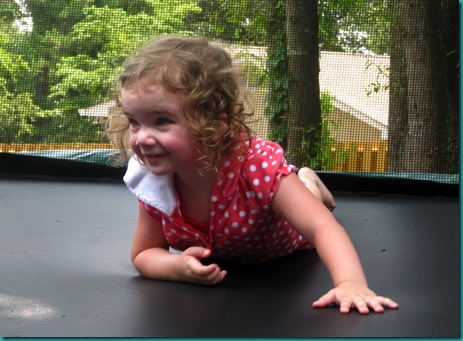 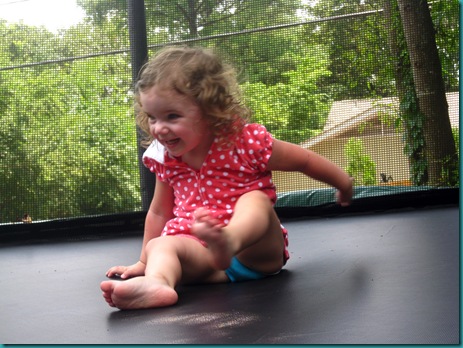 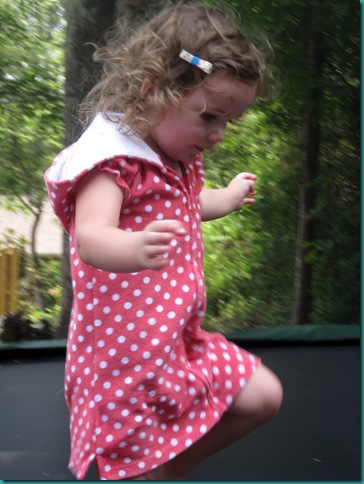 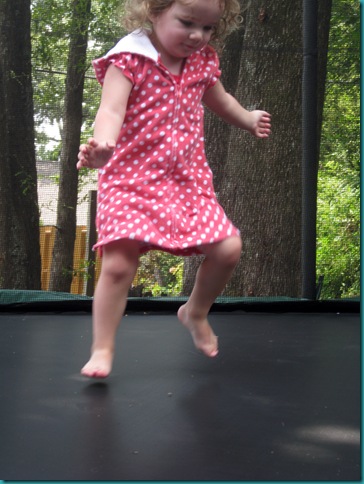 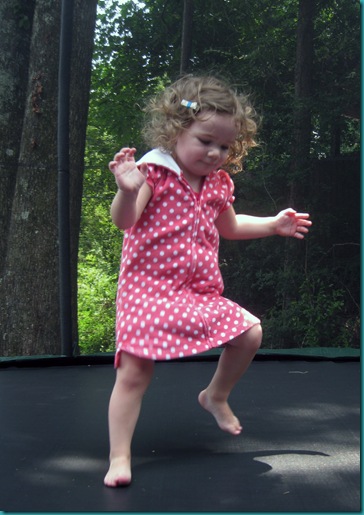 But there’s one thing that can always make a new toy more fun: 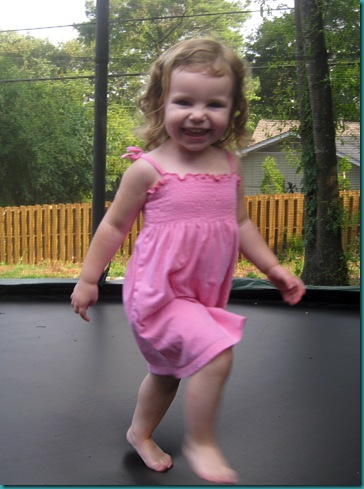 AJ came over Saturday night, and they jumped, and ran, and played rosies, and crawled until they had both sweated out 99% of their body weight. 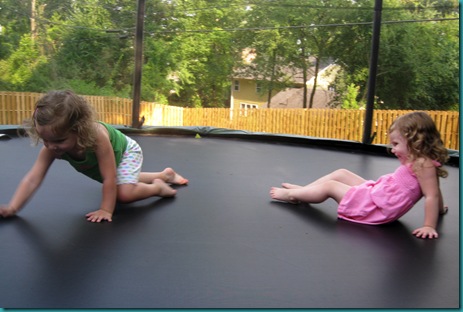 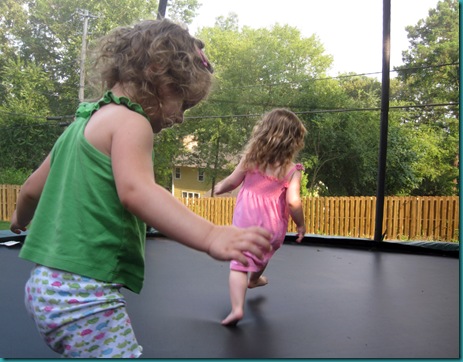 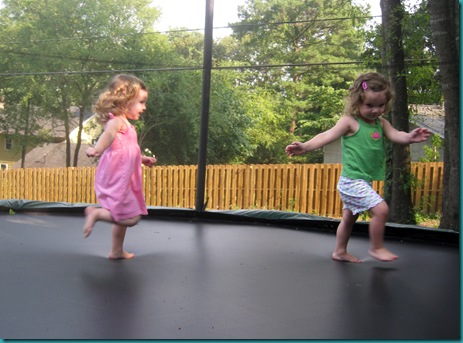 Yes, this is going to be a fun, fun family activity.

Until, of course, my Dad is proven right, and someone gets hurt.

But, for the record, Trampolines are made MUCH safer than when we were the kids – there is no way to fall out, or to get tangled in the springs.

So there. We made a logical decision and this in no way is me living out my rebellious Junior High desires.

And with that, I’m going to stay out past curfew tonight.

15 thoughts on “Jumping Into The Future”