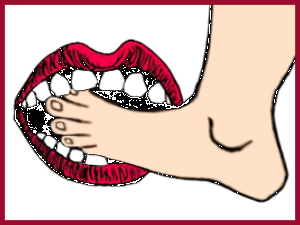 On Sunday, we had a baby shower during Sunday School for Christen, Ryan and their upcoming baby Aubrey. It was a lot of fun – so much fun that poor Chris never got to teach.

As we were getting ready to leave, one of the mentor ladies in our class (read here: older than us but NOT old – don’t want to get in trouble) came up to Christen and I. She was explaining to Christen that it had been a LONG time since she bought diapers, and so she had no idea if they were right, but that there was a receipt in the bottom of the bag.

Christen and I stared at each other with big, open mouths and wide eyes, then both simultaneously burst out laughing.

Ryan, Christen’s husband, was standing near enough to catch the end of the conversation, so of course had to add, “So it’s a present for ME, then, right?”

Of course, all of us are now thinking that we need to find that present and see what’s in the bottom of it – nothing like curiosity to get you to open a present.

By now, our unnamed-so-I-don’t-embarrass-her mentor had turned around to see what we were laughing about.

She stared, puzzled, at us, and said, “What? It’s bubble bath!! Don’t the doctors still say you have to wait six weeks to take a bath?”

“No, That’s not what the doctors tell US we have to wait six weeks for!!”

By now, unnamed-mentor has turned completely red and a bit “glisteny”, as she realized what she just implied loudly to the whole Sunday School class.

She left the room, fanning herself, shaking her finger at me and warning me not to blog about this.

Lucky for you, she caved.

And, for the record, NO ONE else in the class had EVER heard that you weren’t allowed to take a bath for six weeks after giving birth.

umm. . .and I know that fact because we made sure we told everyone else in the class that had been out of earshot about our exchange before we left.