Several of my friends have been discussing the virtues of actually staying HOME, hosted by Rachel G.

I have to admit, I don’t stay home all day very often.

But yesterday, we were getting our carpets cleaned (Ali was very relieved and excited that we were getting her “food” (aka puke) out of the carpet), and so Ali and I had to be home all morning. By the time he finished, we didn’t have the time, need, or energy to go anywhere.

And you know, although I (and Ali) really like getting out of the house at some point every day, in a somewhat “I really should do this more often because it needs to be done” sort of way, I kind of enjoyed it.

I had time to clean out my pantry, which needed to be done desperately.

I would show you a before picture, but it was really too bad to photograph and share.

And, what’s the point of cleaning up if I’m just going to show the world my mess??

But, being that I DO care about you, my blog readers, to give you a hint of how bad the pantry was, here’s the pile of stuff that was getting thrown out: 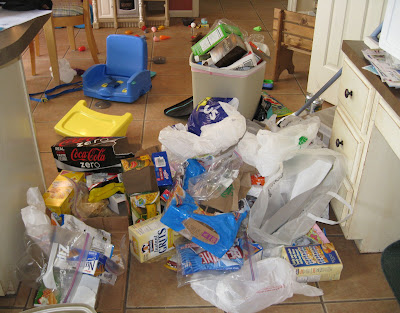 (you may notice that Ali was also cleaning out her pantry behind me, while singing “Clean up, clean up, everybody clean up. . .”)

(She was also enjoying “Eli’s seat”, which I pulled out of the pantry, and insisted in eating lunch in it, with the tray, on the floor. It’s amazing what things are fun when they think of the idea and miserable if suggested by Mommy, isn’t it?)

And here’s the “after” shot (I actually have a walk-in pantry again!!): 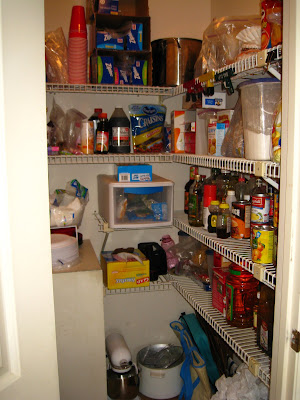 And here’s all the garbage after being bagged up: 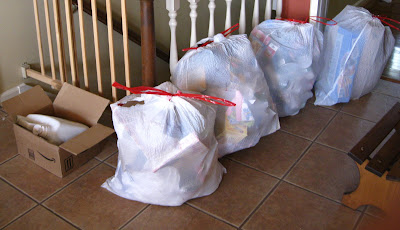 Among other out-of-date items found, I had a whole 8-pack of canned corn with an expiration of 7/31/07: 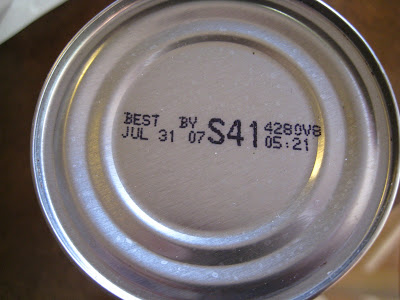 Which is completely inexcusable and inexplicable, since we moved into this house in AUGUST of ’07. I must have thought that a few days wouldn’t hurt, and planned on eating a LOT of corn really quickly.

Turns out, we apparently didn’t eat any of it.

Back to staying at home.

It also gave Ali time to do some interesting things, like find my roll of 100 stamps and decide that they must be her stickers.

(After she got bored with cleaning out her pantry.)

(Apparently, my pantry was messier than hers.)

With the amount of postage she had on her, I could have mailed her to China.

So I now have a pile of very UN-sticky stamps.

Then, she got quite a bit more constructive and actually started spelling words with her letters on the fridge. Well, as best as she could, what with one magnet per letter. She put up “PO” and announced excitedly, “It says P-O-P Pop, Mommy!!!”.

After that, she put up “AEIHUST” and announced just as excitedly, “It says Gramamma, Mommy!!”

We also had time to make things with her marbles: 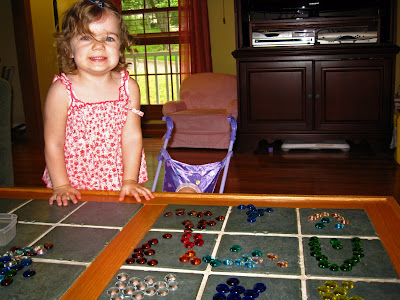 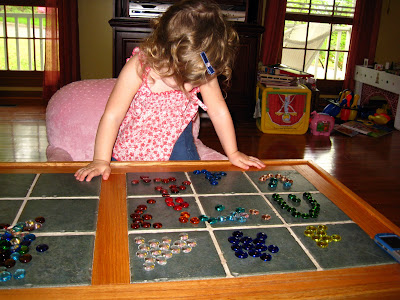 We play with these a lot to practice sorting colors and counting, but yesterday I upped our game and used them to make letters and shapes of things. I tried this because I have noticed an interesting Ali-phenomenon: even though she refuses to try to write letters most of the time, she is always forming letters with a piece of string, food, her legs, etc.

I would love to know what that says about her personality type or which side of the brain she is using. I’m sure that SOMEONE out there can psychoanalyze this quirk.

Oh, and excited as Ali was about getting the carpets cleaned, she WASN’T so excited about wearing these “silly shoes” to be allowed to walk on it: 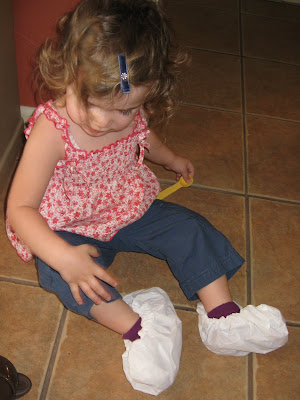 That was our day.

And although we really enjoyed it, we were both very excited when Daddy got home and took us to dinner and then to the Good Friday Service at church (which was awesome – WOW I am continually amazed at how mindblowingly beautiful Ashley’s (AJ’s Mom’s) voice is. You really must buy some of her music. Or at least listen to it. Immediately.).

Back to unimportant stuff. At dinner, I just had to take a picture of this amazing makeup job to share with you: 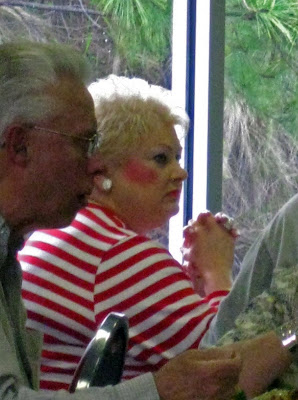 I mean. Wow. Now I understand why some people are afraid of blush. I’M a bit afraid of it now.

Oh. And a piece of humor of locals. When we left the restaurant, I saw this bumper sticker, and it cracked me up because of how “random” the teams were compared to what we’re used to seeing:

I didn’t realize there WERE other rivals besides Alabama and Auburn. Did you?

After the Good Friday Service, Ali and AJ were playing on the stage (as usual), and my brother, who was helping tear down everything, introduced them to these wonderful things called drumsticks and cymbals: 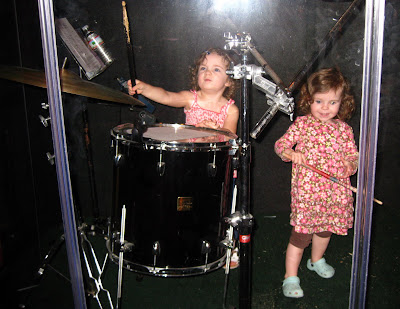 (Sorry for the poor picture quality. I was taking the pics through their super-hip plexiglass drum shield.)

And I love this next picture, because it really shows their personalities. AJ is enjoying herself to the fullest, and Ali is totally in the geek zone and analytically studying exactly what she is doing: 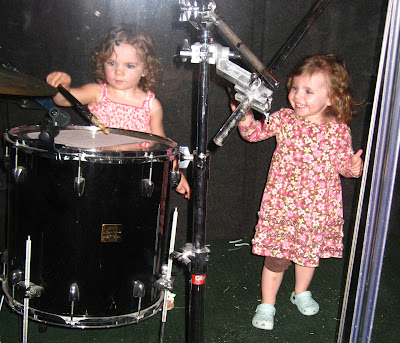 But, being that she gets her geekery naturally, I know first hand that just because she’s studious doesn’t mean she’s not having fun.

Hence, why you have at least one blog post from me pretty much every day. I’m a geek and proud of it.

13 thoughts on “My Day as a STAY AT HOME Mom. And Other Randomness.”