We are in Folly Beach, SC, enjoying ourselves immensely on our anniversary celebration.

We have found that Folly Beach is a great mixture of beautiful beaches and quirky people. And since you know that I LOOOOVE me some quirkiness, Let’s start with the people:

When we arrived yesterday, I read some of our condo’s guest book, and everyone kept talking about meeting Miss Emily. I kept wondering who in the world Miss Emily was.

I soon found out.

Within a minute of us walking out onto our deck for the first time, along the corner came Miss Emily. 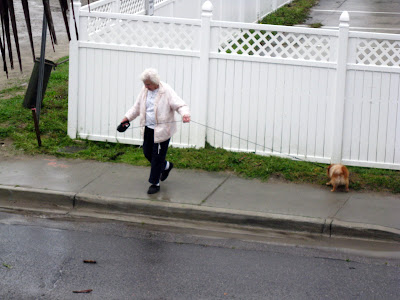 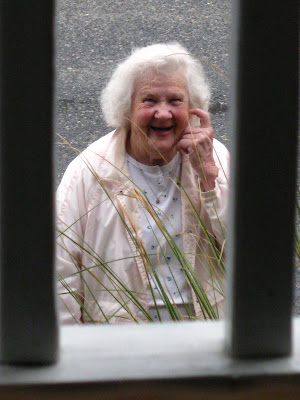 She informed us to let her know immediately if the guys above us were being too loud, and she would be glad to take care of it. She has lived here for 45 years and was 81 years old, and you don’t get to be 81 for nothing, so she tells people what to do around here.

She can be found peeking around every bannister, making sure that the whole city is behaving. 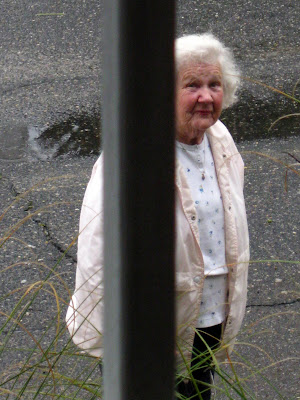 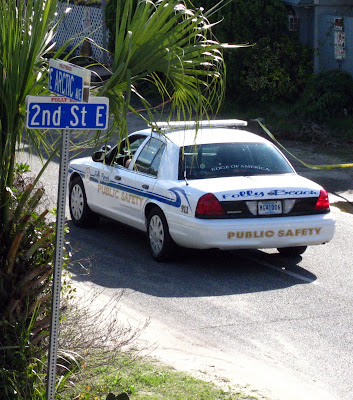 He may be THE Folly Beach police force. But that doesn’t keep him from his duties. No way. We have already seen ticketing at least half a dozen separate people.

Between Emily and Barney, this ‘hood is safe.

As for our upstairs neighbors that Miss Emily was all-too-anxious to boss around for us, here are a couple of them walking down to the beach: 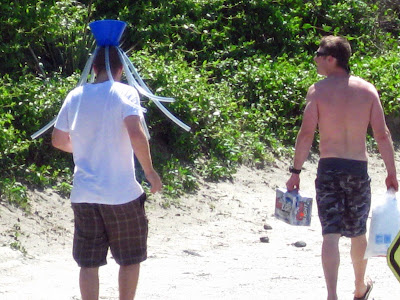 I bet Miss Emily snatches that thing right off of his head.

Okay – so onto the beach pics.

Last night, we walked out onto the pier. It was raining and lightning and quite adventurous. There’s a restaurant on the beach called “BLU”, and they have some really high-powered neon blue lights shining onto the beach and surf, which was magnificent looking. I tried to catch it, but of course this sort of thing is hard to capture in a photo: 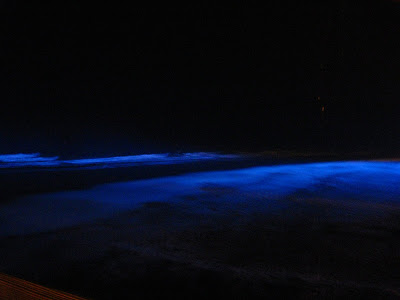 While I was trying to photograph the blue beach, the first super lightning hit, and I got this picture: 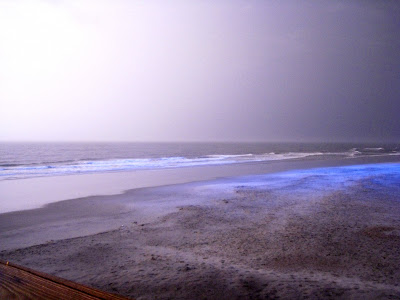 Today, Chris and I took our bikes and rode the whole island. We rode with the wind down the beach (the reason we love East Coast beaches – for the biking), and against the wind on the streets on the way home. We learned last year at Kiawah that riding INTO the wind on the beach is horrendously painful.

We got a nice guy to take our picture partially through our bike ride: 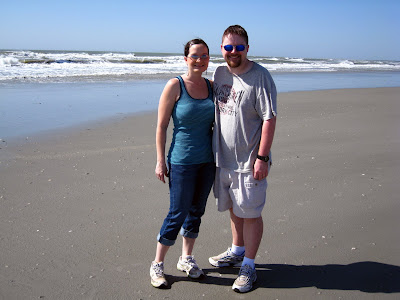 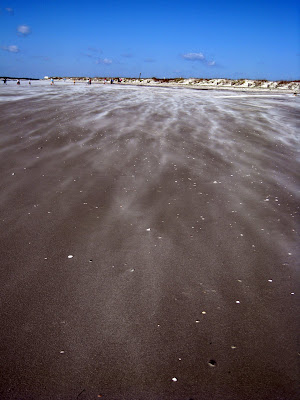 There were also a lot of old pier ruins: 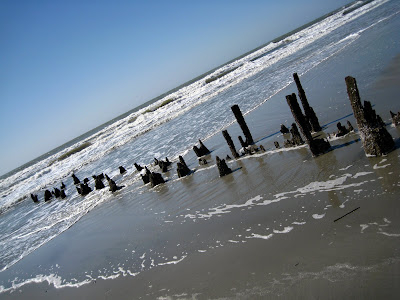 And standing under the gigantor city pier was amazing: 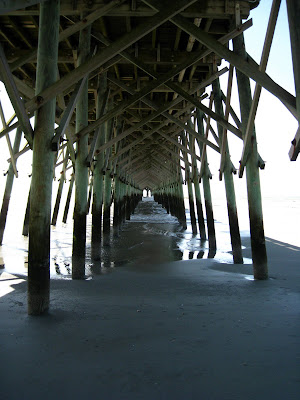 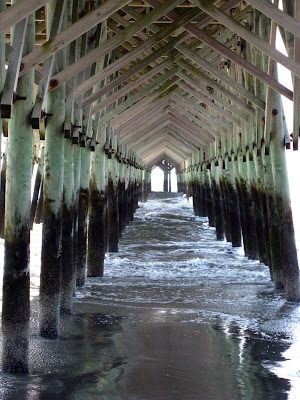 We finally got hungry around 11am (we ate WAY too much yesterday), but still not ready for solid foods, I turned this 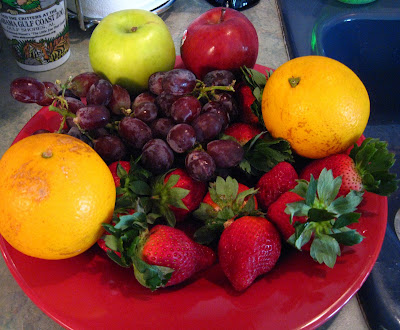 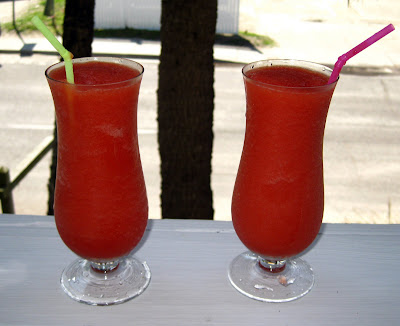 Which we enjoyed immensely here: 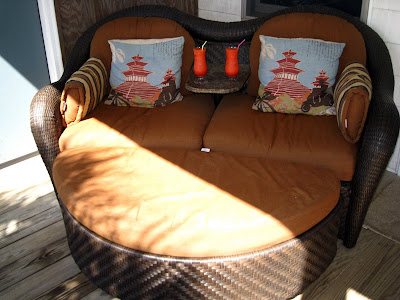 I brought my juicer with us for breakfasts. I have never experimented with making smoothies with it because my blender is terrible and who wants to get out two appliances for one drink? However, when we arrived at our Condo, one of the first things I noticed was a nice blender already out on the counter, so I decided that we would be having smoothies this weekend rather than fruit juice.

And it was amazing.

And no, there was nothing in there but fruit juice, sugar, and ice.

Which was probably the first time that blender has been used so innocently.

Part two of our bike ride: We started down the beach again and decided that we would go to the lighthouse and then get back on the main roads. However, we had to have a bit of change of plans when we got here: 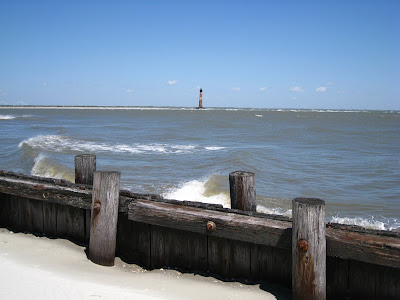 Hm. I guess that’s not going to work so well after all.

We didn’t, however, miss the opportunity to set our camera in the wind on a pier, set the self timer, and run on the rocks to get our picture taken: 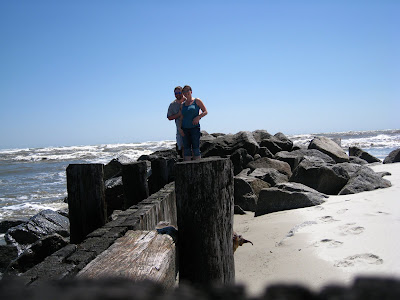 Luckily, all three of us survived the photo op.

Our ride back consisted of these lovely tree-lined streets: 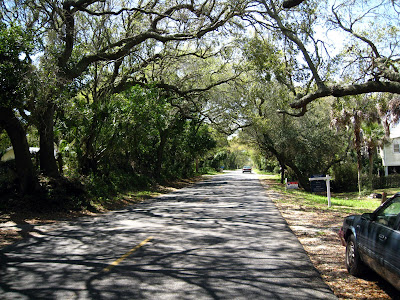 We are currently sitting on that amazingly comfortable deck lounger, and I’m about put this computer up and dive into my copy of the John Grisham novel that Chris has already started.

Yes, we have two copies.

Of the same book.

That’s what vacation is all about.

9 thoughts on “Follies at the Beach”