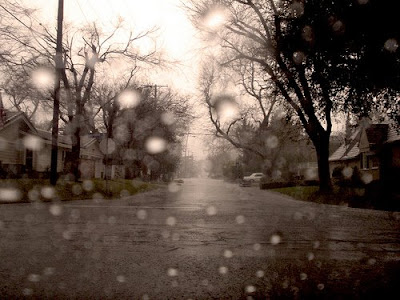 It has been a very dreary, rainy weekend. You know, to finish out the Triumvirate of Weather – what with the snow two weekends ago and 80 degrees last weekend.

All of this rain has gotten me thinking a lot about windshield wipers. I guess I can’t really help thinking about them, since when I’m in the car I’m continuously tinkering with them. I can’t ever get them to the exact right speed.

I really dislike them in general, because the back and forth motion makes my eyes very sleepy. But I also can’t stand to have water on the windshield. So I want them on a speed that takes care of all water, but has no extra rotations in it.

However, Chris is a much more sparing wiper user. He will let the windshield get completely covered in little droplets before using them. I will be sitting in the passenger seat, DYING to reach over and hit the wiper knob. I have to remind myself over and over, “Don’t do it. It’s ok if I can’t see – I’m not driving. He knows what he’s doing. Don’t do it.”

He’ll put up with a fair amount passenger seat driving from me because he has a tendency to not pay attention to where he’s going, especially if I’m in the car with him and we’re wrapped up in conversation. He will completely miss exits or turns that he takes on a daily basis if he’s in the middle of a conversation with me. Who knows WHERE we would end up if I didn’t pipe up.

I know, I’m just that distracting. :)

So I have this habit of always being aware of where we’re going and how to get there when he’s driving, because I often save us from detours.

However, I think telling him when and how to use windshield wipers would cross the threshold of my allowable backseat driving input.

So I will keep reminding myself that as long as he can see, then I don’t have to.