Toddler shoes take up way too many brain cells.

Of course, now that it’s March, Ali’s winter shoes are worn to almost having holes in them, and they look like she’s worn them non-stop for about 5 years.

Everyone keeps saying, “Wow. She needs some new shoes”, and then they look at me suspiciously, as if I may not be feeding her or giving her water either.

I bought her two pairs of summer shoes the other day, hoping that her winter shoes could make it until it was time to wear the new shoes. However, the recent snow proved otherwise, and started making me feel guiltier.

Oh yeah – that, and the fact that every time I put her shoes on her, she looks at me, and in a pitiful voice but as if she’s trying to convince herself, says, “shoes not too tight.”

So we set out to find her some new, bigger, less worn winter shoes. Which, by the way, should make summer come immediately.

However, I quickly discovered that the shoe store has been kidnapped by the same decade that took over Target.

My choices were limited to go with Converse All-Stars, in HOT PINK, as if it wasn’t obvious that they were remnants of a past time already: 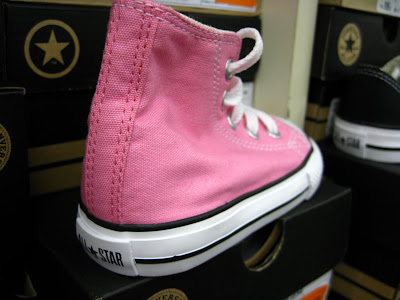 Or the more preppy-80’s look of K-Swiss’. Comes with a size 2T tennis skirt for free! 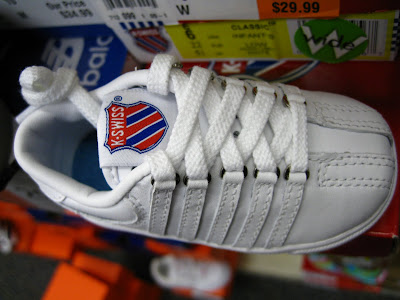 I know, I know, I know it’s CUTE to see miniature versions of stuff we grew up with, but SERIOUSLY, have we not had enough of this decade already??!! Let’s not scar our children like this!! Just because we were scarred doesn’t mean that we need to do the same to them!!

So we headed to another store.

At the next store, the only thing that I found that I remotely liked was too “color heavy” – it wouldn’t have matched everything, or really much of anything.

Until I found the clearance.

And I found a pair of shoes almost exactly like her old ones – but a different brand!! All the way down to the diamonds on each size. Some factory in China is apparently making all shoes but just putting different names on them.

They were so similar, yet subtly different, that they reminded me of a “What’s different in these two pictures??” Puzzle: 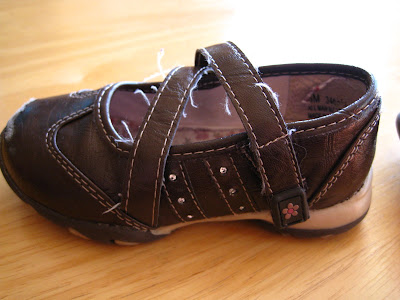 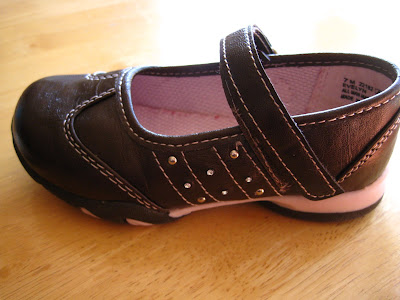 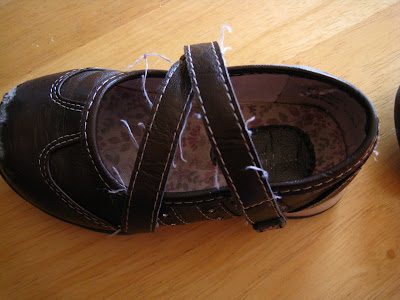 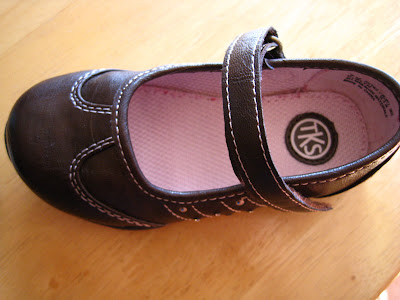 Now I love her old shoes, but it seems silly to replace them with the same thing. But they did match everything. But the same shoe?!?! How boring. Oh, the troubles of a Mom dressing a fashionista of a child.

I caved and bought the same shoes.

When she gets realizes what I did, I’m sure that Ali The Accessory Queen will never forgive me.

Later on, after all of this shoe shopping, Ali told me, “your foot hurting!!”

I took off her shoe and sock, and found that during the trying on of shoes, she managed to get a few strands of long, dark hair wrapped and tangled around her second toe.

I have NO idea where that long, dark hair came from.

So I started tugging at it, but it was super tight, so it just made it hurt more. She whined, but always being a positive thinker, said in a hopeful voice, “OTHER foot feels better now!!”

Which proved that my Dad’s logic was right. He always told me to bite my other hand or foot or whatever if I complained about something hurting.

11 thoughts on “Outfitting the Foot of a Toddler.”