Okay – I want to start a new weekly feature meme. Which means it will either bomb or be a hit.

Probably bomb, but I thought it would be fun anyway, as long as it lasts!

I think that I will ultimately land it on Fridays, but to be utterly confusing and such, I decided to do the first one on a Tuesday.

So. If you haven’t noticed, I love taking pictures and captioning those pictures. So I thought it would be fun to do it in contest form. Each week, I will put up one picture that I have taken at some point. Then it is up to you to comment in what your caption for the picture would be. And, since I will be giving no background to go with the picture, you can make up anything that your imagination desires. It can be a story, an explanation, a conversation from the people in the picture, whatever.

Then the next week at the beginning of the column, I will announce the winning caption for last week’s photo. Of course you’ll win nothing, except that you will get this cheesy little button to put on your blog: 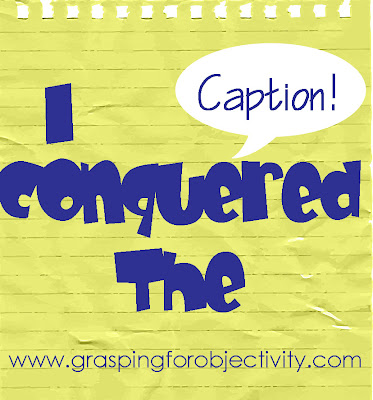 And if you don’t have a blog, well, you can print it out and hang it on the fridge.

But of course it would get really fun if you all played along. I will have a Mr. Linky on the post each week where you can link in, and we can all go and make up captions for your picture too!

And that way I’ll get to play too, since I love captions so much.

So, let me know what you think, if you see any ways that we can improve the game, and let me know your captions for our first picture of CONQUER THE CAPTION:

Caption Away!!!
(and yes, that is Ali.)
Since I seem to have confused everyone, here is clarification of how to participate (apparently, yes, ideas WILL bomb if you’re not clear with your instructions!!):

1. Write a caption for the picture that I post and COMMENT it on THIS post, and/or
2. Put up your OWN Conquer the Caption post with your own picture on your blog and leave your link on the Mister Linky here, and we’ll come suggest captions for your photo.

The winner I select will be for the best caption written for MY photo. If you put up a photo, you can choose the best caption for your own photo and declare them the winner.
Hope that helps!

12 thoughts on “Conquer The Caption: Week One”