I have had the song “Benny and the Jets” stuck in my head all day, because Ali and I decided this morning that Kitty and her three cats should be a band. So we’ve been singing it all day: “Kitty and the CATS”. Then, in a complete random twist of irony, the song actually came on the radio on our way home from dinner. I mean seriously – I haven’t heard that song in decades.

Okay, maybe a slight exaggeration, but it’s certainly not on normal rotation. So Ali and I will both be singing “Kitty and the Cats” for the foreseeable future.

Now, onto a recap of our day. Quick Disclaimer: This post will be a completely disjointed pile of pictures and thoughts, so don’t expect some beautiful weaving together of a story here.

Mainly because I followed up my dinner of Steak and Potatoes (which always makes me sleepy – which makes me believe in that “eating for your blood type theory, since it’s the opposite of what I’m supposed to eat. Oops. There I go on a tangent. Told you) with a big slice of super-icing-ey King Cake, something that I L-O-V-E but have been avoiding like the plague (I even took this picture of of the delicious looking ones at Bruno’s last week with the thought that I might blog about my super self-control:). 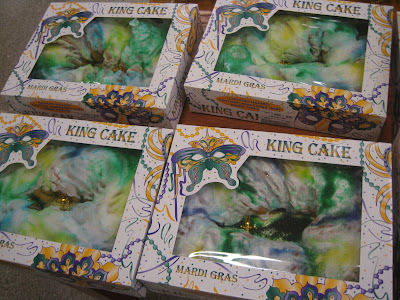 However, being down here where Mardi Gras is an official holday and the King Cakes are GENUINE made it so that I couldn’t fight the temptation anymore.

So I am in a fog, a diabetic coma, and my eyes are involuntarily darting from side to side.

Now that I’ve cleared that up.

Last time we were down here, Ali was obsessed with attempting to sit in their tiny beach chair that held coasters. Although she acknowledged that the chair was too little for her this time, the temptation of trying to crawl through the cat tubes was too strong for her. 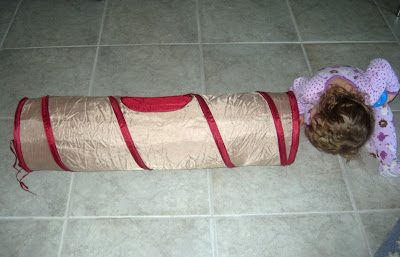 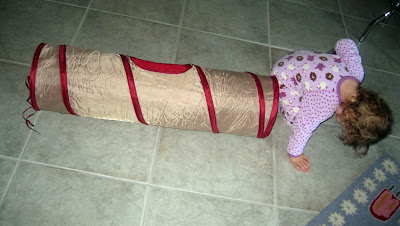 After giving up on that endeavor, she decided to play puzzles with Kitty: 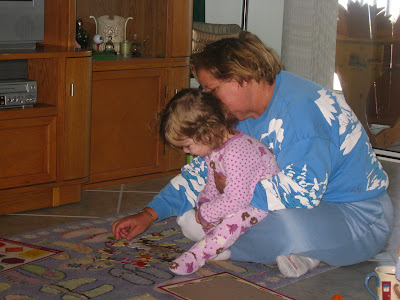 After that, us girls went outlet shopping while the boys did some work of some sort.

Banana Republic had some awesomely horrible huge rubber boots. And since Mom was able to finally free Ali from the grip of intense fear of boots (aka “Silly Shoes“) by buying her some rain boots, I figured it was time to torture her with boots again: 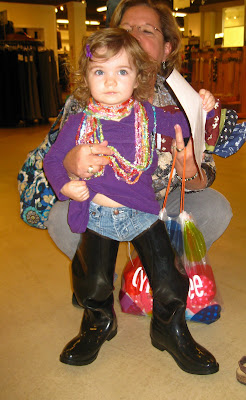 I’m sure she’ll forgive me one day. 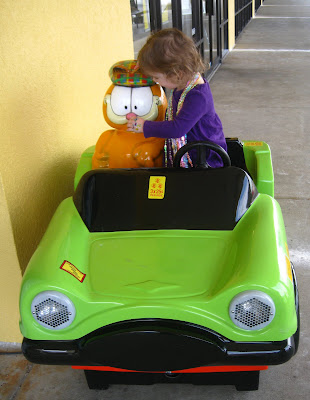 She drove him all around the outlet mall, much to his excitement. 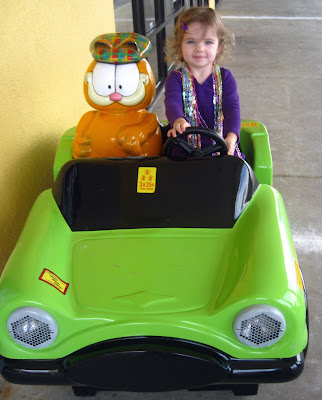 After shopping and naptime, we played a little in the back yard. Much to Mommy’s nervousness, Daddy let Ali walk down the pier: 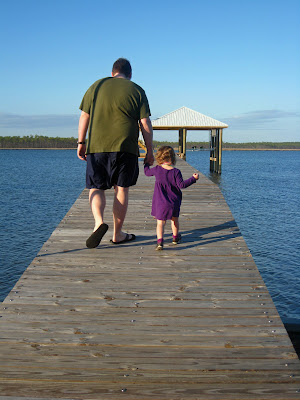 But she didn’t go without repeating to herself, “Ali be CAREFUL, Ali be CAREFUL”, and looking back every now and then to make sure Mommy was coming: 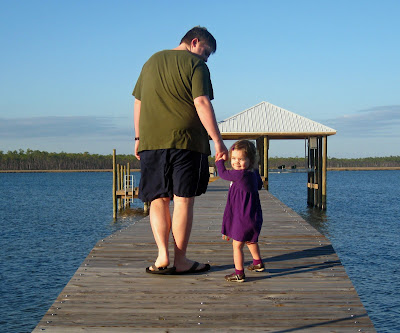 We had to have a good run in the yard. For some reason, their backyard just begs to be run in: 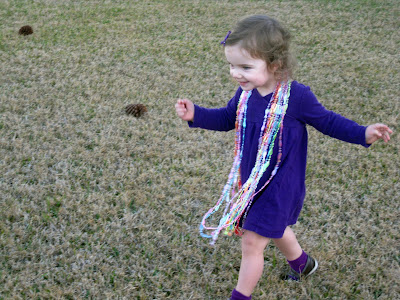 Yes, she wore those Mardi Gras beads all day. 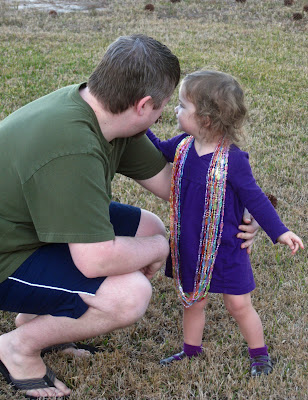 Jaci should be proud of her soccer skills – we got in some good kicks. 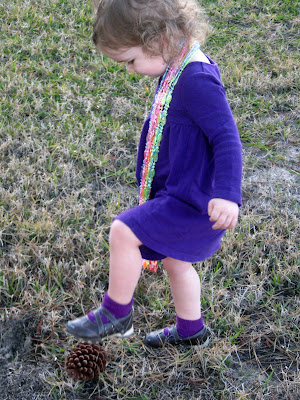 While we were going “up,up,up” and “down,down,down” with Ali over and over on the porch stairs, I noticed that the guys were demonstrating all kinds of creative uses for a roof.
Such as, climbing exercises, 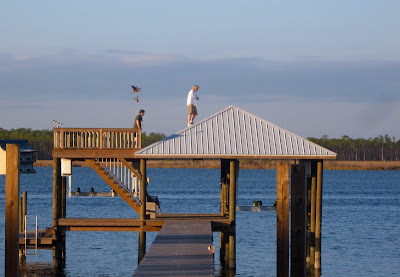 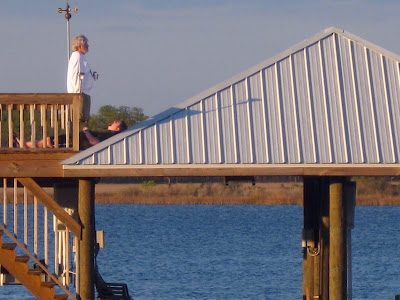 We had some family swing time (don’t you love my rainbow cozy clothes??), 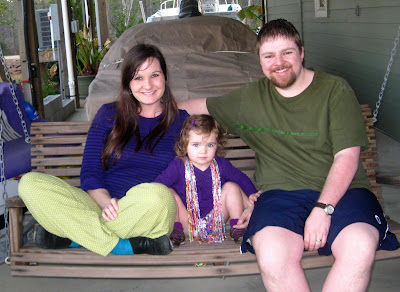 And a little spinning around time. Back to that whole “yard who begs to be run around in” thing, 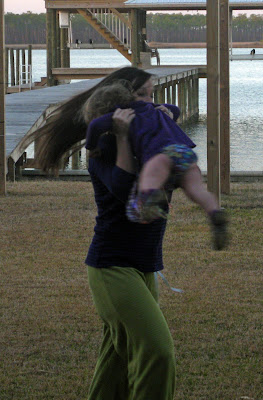 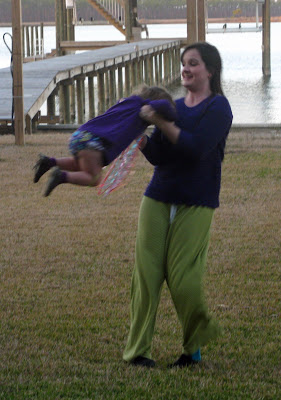 Then collapsed in a dizzy heap. Or, as Ali calls it, “bizzy”. 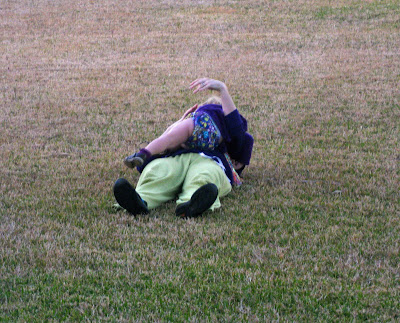 But the most important thing we learned all day was provided by the toll bridge company: 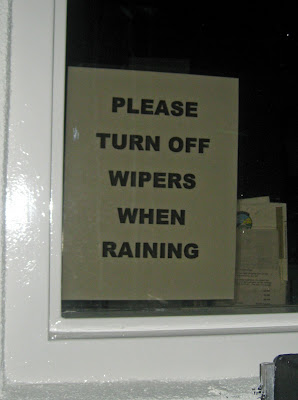 That’s right, people: feel free to leave your wipers on, but only if it’s sunny out.

6 thoughts on “Kitty and the Cats.”