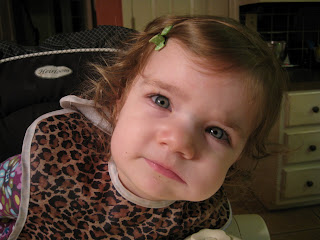 Ali has recently started storing food in her left cheek. Yes, the left one only.

The first time she did it, it was the last bite (or two or three) of her dinner, and I thought she was doing it because she didn’t care for what I gave her for dinner (Sloppy Joe’s, or as I tried to spin it to her, “Hamburger in Dip-Dip”). She kept that huge wad of Sloppy Joe in her mouth for nearly an hour. I told her several times that she needed to finish eating, and she looked at me like I was crazy.

The next day, she chipmunked some candy. She killed my “I don’t like it so I’m not eating it” theory by holding several pieces of that candy that she was so excited about getting in her cheek until it completely dissolved.

My parents used to call me “chipmunk” because I was notorious for keeping food stored up in my cheeks for later. So I guess she comes by it naturally.

I thought I had told Chris about this new development, but if I did, he apparently didn’t remember.

I must have told him during a football game or something.

Last night, he was feeding Ali her dinner while I was at LifeGroup, and she chipmunked her last bite.

Thinking, accurately I’m sure, that this wasn’t good for her teeth, he told her to eat her bite. She didn’t do it (she didn’t refuse, she just looked at him blankly), so he decided, again accurately, that this was apparently a “battle of the wills” issue.

He would poke her cheek in, and then it would pooch right back out again.

She didn’t fuss, she wasn’t rebellious, just very. . . .uninterested. And lazy. He said she laid her head on her high chair tray several times. . . just. . . . doing nothing.

After about 10 minutes, he got bored and went and got a puzzle. . .”don’t you want to play with this puzzle??”

Finally, after 20 minutes of sitting and waiting for her to quit chipmunking, he got really bored and wanted to play with his little girl. So he got her to open her mouth, he pried the bite out of the side of her mouth, put it in the middle of her mouth, and told her to eat it.

And then she was back to her bubbly, playful self, and was so excited to play with Daddy.

Several times through the rest of the night, she excitedly commentated to Daddy, “Ali ate the bite!!!!”

This chipmunking phase could get interesting. And rather nasty. I am sorely afraid of the first time she decides to kiss me while chipmunking. Ew.