Every family has great holiday traditions. One of my family’s seems to have faded out of existence, thanks to a bit of over-aggression. I miss it greatly, and I think I may do a petition to get it back.

Spoons is an awesome card game. If you haven’t played it, you should. It is a great holiday g

athering game, because it works best with more people (ideally maybe 8 or so).
Here’s the overview for those who have never played:

Somewhat akin to musical chairs, you put out one less spoon than players in a circle on the table, and everyone sits around the table, ideally as evenly spaced from the spoons as possible.

The idea is to get four of a kind in your hand. When you do, you take a spoon (quietly, if you want to make it more interesting). As soon as one person has four of a kind and takes a spoon, it’s fair game for everyone else to grab a spoon. One person doesn’t get one, and so they get a “letter”, starting with S. When you miss enough that you spell S-P-O-O-N-S, you’re out. You play as many rounds as it takes for there to be a winner, swapping up the dealer each game.

So what happened, you ask?

It is a precious family holiday memory.

The year was 2000. Thanksgiving. I was 18. Chris and I were engaged, and JC and Lindsay were dating. 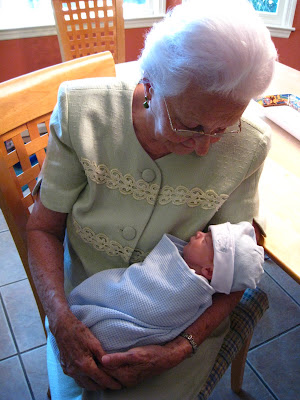 We had everyone over for dinner, including Chris, Lindsay, Lindsay’s parents, and my sweet, innocent, tweety-bird-owning-look-alike Grandmother, Mammaw (of whom I have included a picture to illustrate her sweetness and tweety-bird-owner-identicalness).

Mom prepared a feast for all, of course. It was a wonderful family gathering. A chance for the new-coming members of the family to really delve into the family and become a part. A chance to make good impressions.

After dinner, we cleared off the dining room table and began a game of spoons.

Now, you play with spoons because it can be a brutal game. “Forks” would be dangerous, as would a hearty game of “Knives”. But spoons? Pretty harmless.

However, we are ALL a pretty darn competitive bunch.

It had already been a spicy game before “it” happened. I had even already given Mom a “spoon cut” on her hand (yes, that is possible).

Then, during one of the later hands of the game, everyone had gotten a spoon but Chris and Mammaw, who were sitting on opposite sides of the table from each other. They dove for it at the same time.

Both splayed out onto the table, Chris grabbed the spoon end, and Mammaw the stem end. They started tugging. And jerking. And going back and forth. The whole table was rocking and sqeaking. They began trash talking each other. Dad began to get irate and told them to calm down.

Then there was a crack. The leg broke on the dining room table that my Dad had lovingly handcrafted with gorgeous woodworking skills in the early years of their marriage.

As I was writing this post last night, I asked Chris, and he and I both actually don’t remember who actually ended up with the spoon. But I do specifically remember three things:

Dad DID fix the table, Chris DID still get to marry me, and we actually DID finish the game of Spoons (on the floor in the living room). I won – I do remember that. We are, after all, a competitive bunch.

9 thoughts on “Have a Spoon of Holiday Tradition.”