We have had a wonderful Thanksgiving weekend – it all started with having the pleasure of hosting Kitty and Leo (Chris’ Aunt and Uncle) overnight at our house. Ali was in heaven: 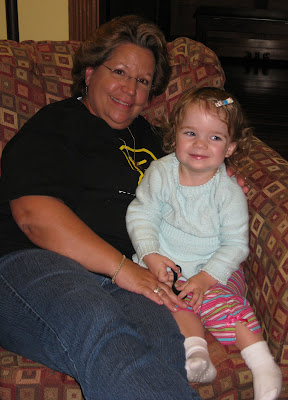 Then we had Thanksgiving dinner at our house for mine and Chris’ family. Ali moved up to seventh heaven!! She LOVES having all of her favorite people in one place, and she was so mesmerized by all of the attention that she didn’t even mind sharing it with Eli!

She showed Nana her shapes: 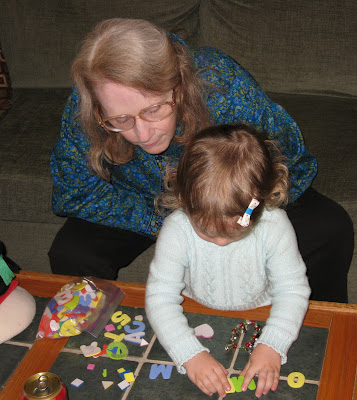 And sat in Papa’s lap. 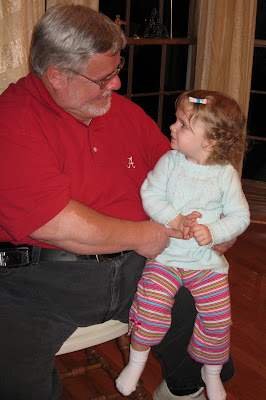 And in general visited with everyone! She was so excited she went past the point of “social graces”. In her excitement, during a jumping up and down and laughing with Papa series, she announced to him (very accurately, I might add), “Ali pooped!!”. Funny though, he didn’t fall for the line that “the rule is, whoever she tells gets to change it!”

On to more pleasant subjects. Here is half of our dinner table(s): 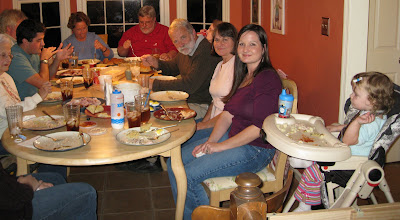 And the other half: 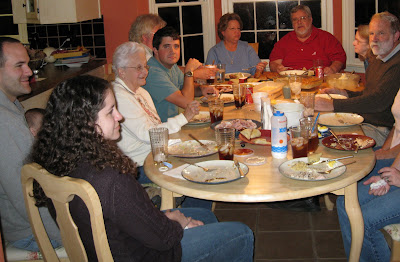 Fourteen!!
Ali was so happy: 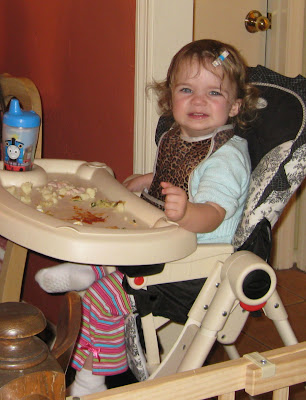 After she finished eating, she just sat back and basked in all of her seven-fold grandparental glory. She looked at each of them one by one and said “Hey Gramamma!! Hey Pop!! Hey Nana!! Hey Papa!! Hey Kitty!! Hey Leo!! Hey Mammaw!!”. She couldn’t have been more thankful.

You know it’s a successful meal if it ends with every piece of silverware that you own to be in the sink: 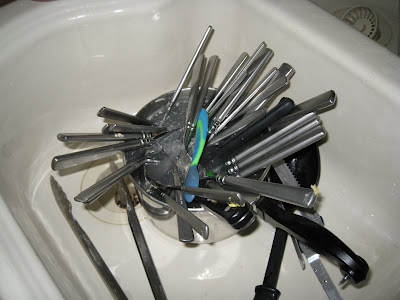 Friday, we went to one of my Aunt’s house to see all of my Dad’s family. Ali and Eli had much fun together, including dancing lessons, 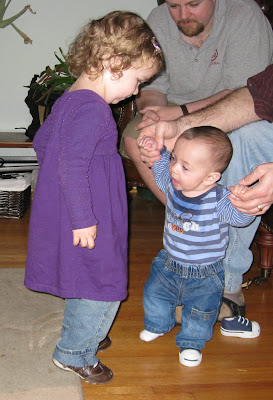 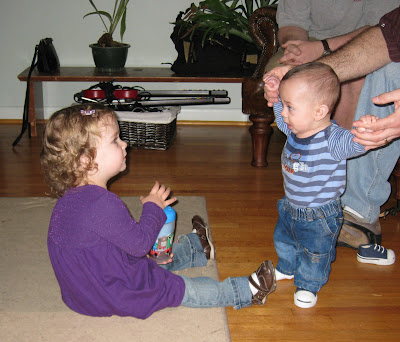 My Aunt still had Mardi Gras beads from 1985 (I think my parents kept my cousins for them to go that year, and I actually remember them bringing home piles of beads in paper FoodMax grocery bags. So I played with those same beads as a four year old!). Anyway, Ali L-O-V-E-D them. She spent at least 30 minutes just putting them on and taking them off. 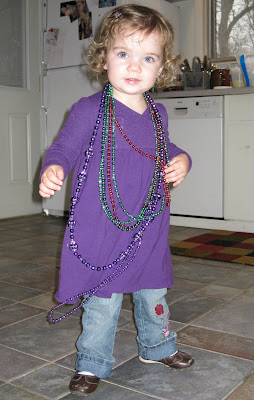 Their house is by the Cahaba River. It was very foggy, which made for some great photo ops. 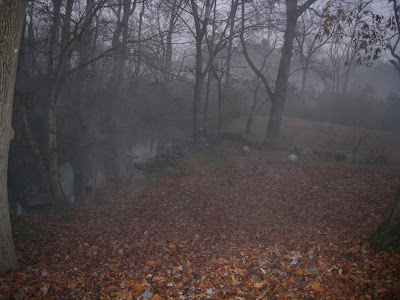 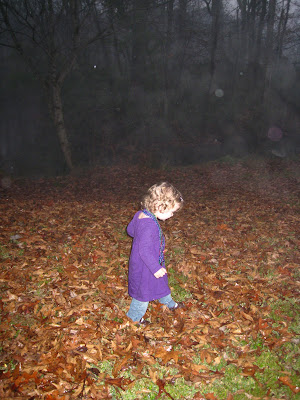 And some spooky photos: 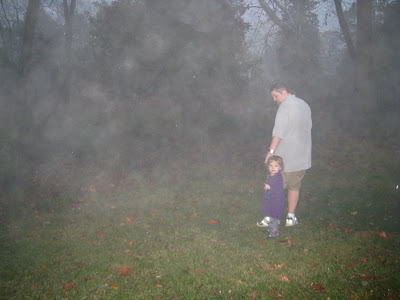 And then today, we went to Tuscaloosa for the epitome of the football season: The Iron Bowl. We took Brad, Deidre, and Kendall. The girls had a blast tailgating together! Although both of them seemed to think that tailgating meant dirtying their own tailgates, of which they both did an admirable job (wow this post has a lot of poop references).

Here they are on the actual tailgate: 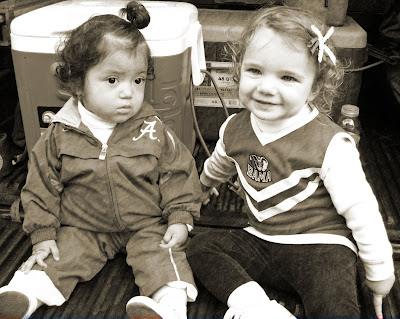 They both loved playing in Papa’s truck. Ali actually begged to “play Papa’s truck”, which is quite a good situation for Mommy, as it works as somewhat of an oversized, outdoor pack and play. Containment is a nice break! 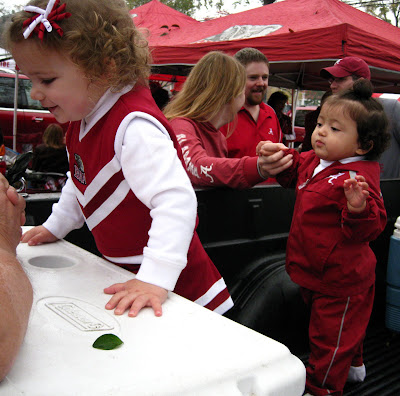 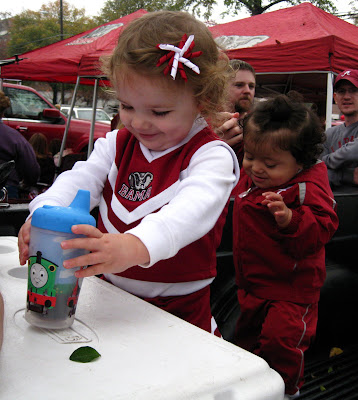 These were the only two people at the game that the humidity was giving them GOOD hair days (curly-haired people are so lucky): 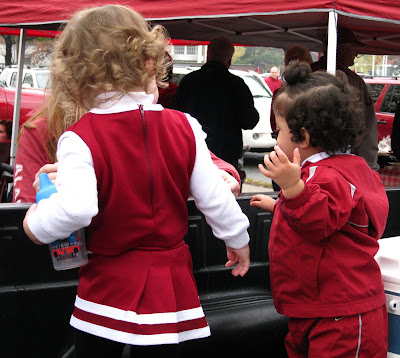 I took a few pictures of Ali (I know this comes as a shock): 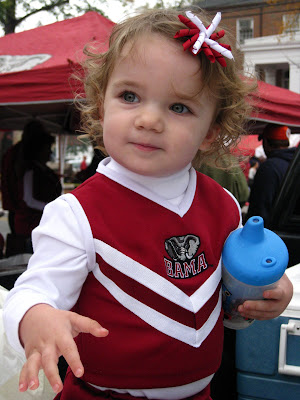 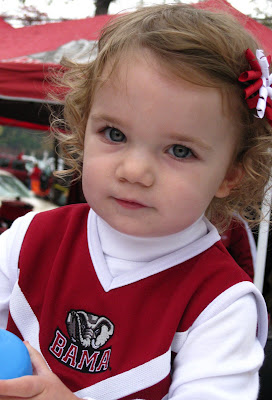 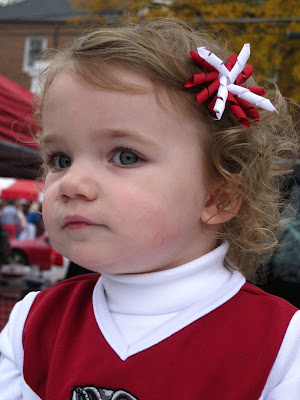 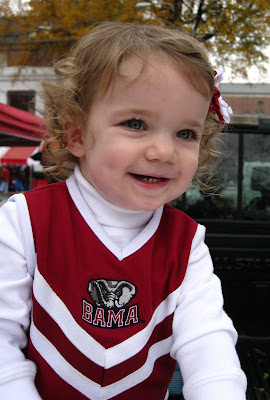 Us girls returned home for naptime, and the guys went to the game, and had a glorious time.

Ali woke up from her nap in time to watch the end of the game. She really loves football. Every time a commercial would come on, she would start whining and say “Foootball!!! foooootball back on!!!” Of course, I made her ask with a happy voice before allowing football to come back on.

I explained to her that Daddy was at the football game, and to watch for him on TV. It’s very entertaining having an early talking baby, because her vocabulary often exceeds her reasoning abilities. Despite the fact that she knows EXACTLY what her Daddy looks like and could pick him out of any lineup, she pretty much thought everyone was Daddy since I told her he was on TV. In disguise, I guess? Or maybe she’s pretending. I dunno. Anyway, here were some of her observations:

(right after I told her that Daddy was on TV, Tommy Tuberville, Auburn’s coach came on the screen): Daddddy!!! Heeeey Daddy!! (I’m sure that Daddy will be sooo happy that he was confused with Mr. Tuberville.)

(when the players were running down the field): Daddy Running Fast!!

(high up shot of the field): Little bitty Daddy!!

Oh well, that’s better than Sunday, when she grabbed Chris and I and proclaimed proudly and loudly to all who could hear, “Ali’s two Daddies!!!”.