Chris has this quirky habit of when he is pointing to something (especially to something on a piece of paper), he uses his middle finger. I have noticed that his Dad does it too.

Chris says that it is more comfortable, especially when moving your hand around large drawings (i.e. at work). A bit weird, if you ask me.

However, it must be genetic. 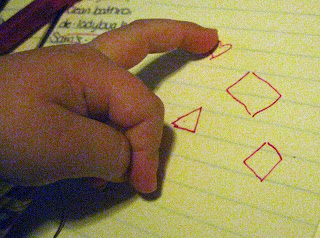 Ali has started using her middle finger to point to things. She points to things on paper just like Daddy, even though I don’t think she has seen him do it (as he has broken the habit quite a bit in the last few years, which I’m sure has nothing to do with me teasing him about it).

She decided to ramp up her pointing skillz while we were bike riding the other day, She was pointing to people, while talking to them, with her middle finger.

When doing the Punnett’s squares and figuring out what our child would be like, I never considered the middle-pointing-finger gene.

3 thoughts on “The C Family Point.”