Hi there, other BooMama loyalists!! I was a bit ahead of the curve posting my holiday deco, but if it’s just the same with you, I’d like to share it with you anyway! So this is my post from November 23rd:

Although I despise the movie “Christmas Vacation” with every bone in my body, I am proud to be married to someone who likes to decorate for Christmas as much as Clark Griswold. Chris, unfortunately for me, LOVES the movie and insists that we watch it at least once every Christmas (I usually find something distracting to do while it’s on. Maybe this year I’ll be blogging!).

Anyway, all that to say, Chris starts planning his lighting extravaganza somewhere in October. Usually it is when the Crimson Tide starts doing poorly. There have been many a year that he came straight home from a disappointing football game and consoled himself by fiercely hanging lights on the outside of the house.

It’s kind of his way of putting football behind him and looking forward to a more joyful season.

However, being that we are still miraculously (and quite undeservedly in my highly informed opinion) ranked #1 in the nation, he hasn’t had quite the energy for lighting endeavors as usual. Which means that we just got our lights up yesterday. AND he didn’t double the amount of lights from the previous year (which is also part of his football-recovery-twelve-step -program).

So yesterday while Ali was napping, we had fun getting the outside Christmas lights up. 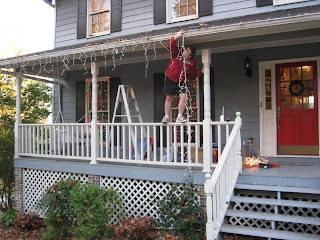 I was actually the person who added a new “feature” this year (which made Chris beam with pride). I hung cheap, plastic, 90%-off-after-Christmas-markdown brightly colored, non-breakable Christmas ornaments on our leafless dogwood tree. I like it because it adds daytime decor to the mix.

Here’s a picture (it was dusk by the time I got done; I’ll have to try and take a better one later): 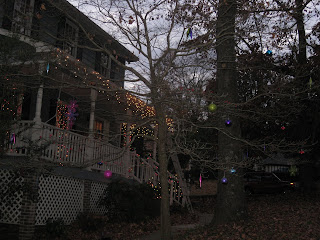 While I was up on the ladder hanging the high ones, I was intrigued by the reflection in the bulb of me, the ladder, the yard, and our neighbor’s houses. So I attempted something which I usually fail at – an artsy shot: 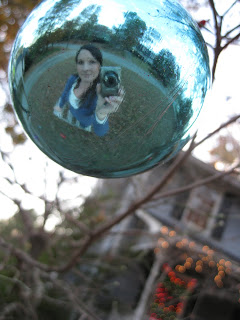 Oh – and I used the small ornaments left over from my tree project to string up on the mantle: 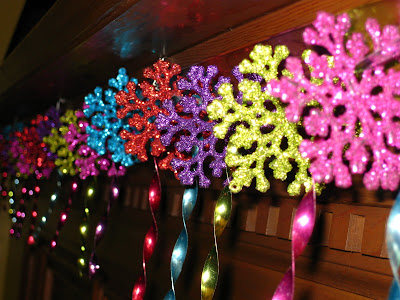 Back to outside.
Here’s the nighttime finished product of Chris’ lighting: 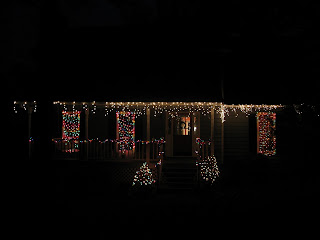 He really wanted to light the upper eaves as well this year – and I have a feeling he still might – but he couldn’t quite figure out how. But here’s the proud artist with his creation thus far: 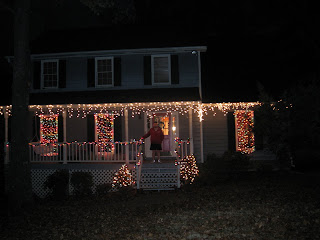 When Ali woke up from her nap (actually, when I woke her up at 5:30pm!!), she was THRILLED!! However, she wasn’t overcome enough to not beg us to blow bubbles also: 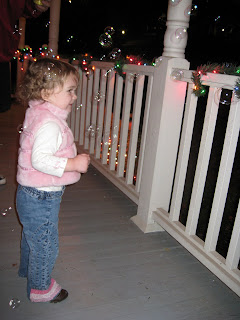 Here she is checking out the lights in the dark: 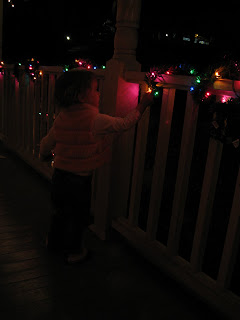 Then we got the Christmas tree out and let her help us find the right branches and put it together: 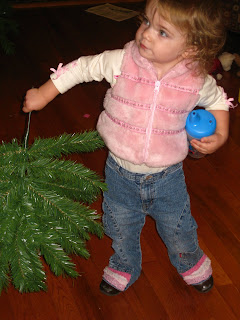 We used to get a real tree – the most beautiful sort – but when I wanted to get Oreo, Chris’ deal was that we could have a cat if we could have a fake tree. Something about carrying it and watering it and vacuuming after it and getting rid of it took the magic out of it for him. . . .

And we got our our Christmas knick-knacks. Oh, Ali loved them. She had to have played this one at least 518 times: 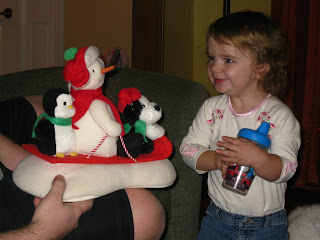 This morning when Ali woke up and we came to the top of the stairs, she looked down and said, “LIGHTS!!! ‘CITING!!!”.

Tonight we decorated the tree. Amanda came over (as is tradition) and helped. When she got there, Ali pointed to the tree and said “Lights on it!!” at least 10 times.
Ali “helped” Daddy run the lights: 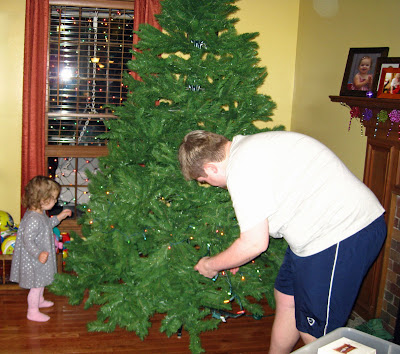 She LOVED looking at each ornament. Here she is inspecting Bob and Larry: 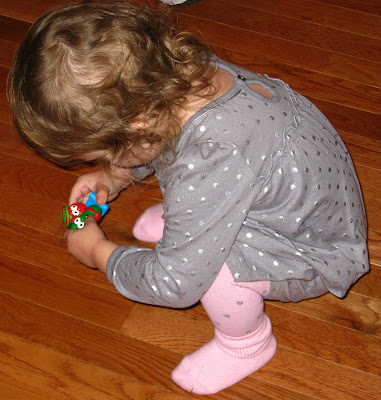 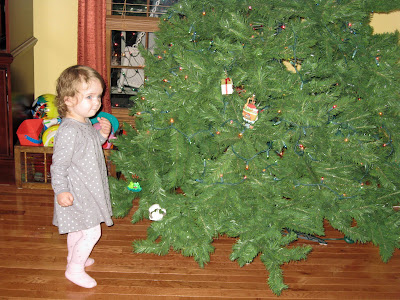 Getting help from Amanda: 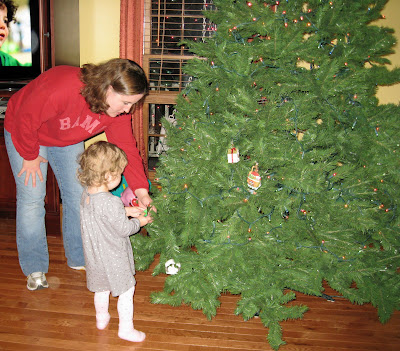 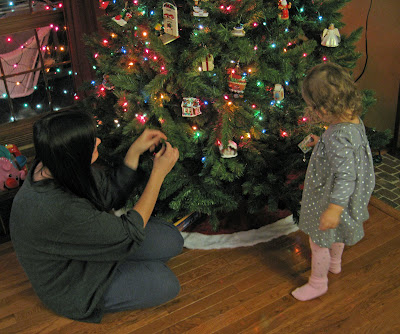 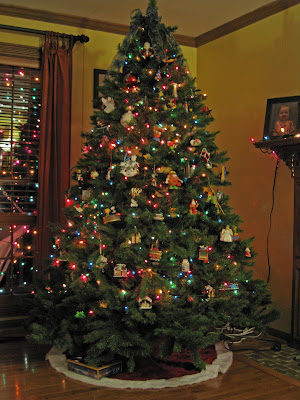 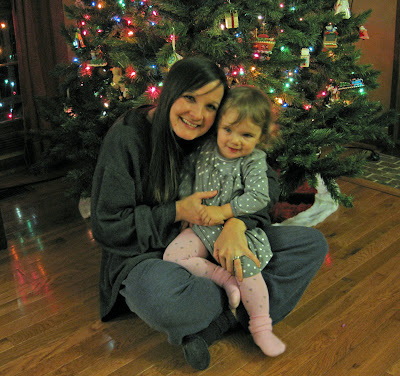 We are now ready for Christmas Thanksgiving festivities!