I went in this morning for my sonogram (for those of you who are behind on reading my blog, I AM NOT pregnant!! Read here and here to get caught up), and the sonogram tech said that I definitely had a lot of gallstones, and she showed them to me.

I just got off of the phone with the nurse a few minutes ago, and she said that as soon as the doctor got in, she was going to have him refer me to a surgeon, and she would set an appointment for me. Then the turnaround to surgery was usually within a week, so I would probably be having surgery next week to remove my gall bladder, or at latest by the next week.

So thank you ALL so much for your prayers for a conclusive answer, as this certainly is one!! I am just so relieved that it is something easy to diagnose AND fix. And I’m ok with having surgery – I’ve had four surgeries in my life with no complications (except for my previously mentioned puking from pain meds), so I’m not too worried about doing it again.

Now that the medical update is out of the way, here are a few of the interesting things that I saw while at the doctor’s office lately:

So I went to the doctor on Friday. I walk into the nine floor building, and see three elevators and two button panels.

This button panel was on the far left side: 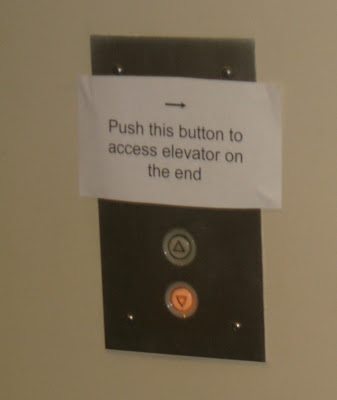 …which meant that there were two elevators in between it and its elevator.
Then THIS button was on the other side:

. . .and who knows how you were supposed to access the elevator on the left, if you so chose it.

So of course, I figured it best to press both buttons and see which arrived first.

The elevator I got on sounded like a groaning monster. It was quite creaky and a bit shaky. And it liked to stop at random floors. Where no one was waiting.

Then the elevator I took when I left was all sheeted down in drop cloths, and it stopped at all NINE floors for no apparent reason.

Luckily, as I was leaving the building, I saw an elevator repairman walking in. He had his work cut out for him with the “failevators”.

Back to my visit. Since the ER doc thought I had gallstones, he sent me to a gastroenterologist. When I walked in my room, there were two tubes of lubricating jelly sitting on a paper towel, at which time I had my own little Thankful Friday for the fact that I was having upper GI issues.

I had plenty of time to sit and ponder life while waiting on the doctor, and so I studied the big 3-D poster on the wall of the entire digestive system, from the throat to the, well you know where it all ends. Anyway, on this poster, they had illustrated everything that could go wrong anywhere in your digestive system. I counted, and the poor guy in the illustration had 21 ailments. Reflux, cirrhosis of the liver, gallstones, several varieties of cancers, ulcers, diverticulitis, crohn’s disease, and internal AND external hemorrhoids.

I bet he was one miserable fellow!!

And so, one out of twenty-one ailments isn’t so bad. Right?

4 thoughts on “Results, and some of the lighter details of my trips to the doctor”