I don’t really have an excuse, except for a just plain busy morning.

Oh yeah, and I got up earlier than usual. Maybe that’s it.

I had my post-surgical doctor’s appointment at 8am this morning, so I dutifully set my alarm clock back to 6:30 instead of it’s usual 7. Life is tough, I know. So I got up, got ready, and then did that thing that every mother hates doing:

I woke Ali up.

Not that she minded – she was a good sport – it’s just that every mother relishes that time in the morning to get things done pre-baby-wakeup (some mothers don’t even get any, so I really appreciate mine) and so it just hurts to wake them.

So I had decided the night before that to save time and not have to wake Ali up quite as early, I would just give her some milk, pop her in the car, and then she and I would go get Chick-fil-a or something for breakfast between my doctor’s appointment and bible study.

So we get in the car just in time to get to the doctor on time and I turn the key, and . . . nothing.

Not even that clicking noise that it makes when a battery usually goes dead.

And of course I’m in the garage, so the thought of how to get my big ole’ SUV out of the ONE CAR garage so that it could be jumped off was daunting. But I remembered that my parents had some sort of nifty device that would jump a battery without another car, so I called Dad (who was out of town) who told me that yes, they did have one of those. So I called Mom, and she headed over, still in her jammies and without contacts in yet (thankfully for the other drivers out this morning, she DID have on her glasses) to save me.

She brought over her nifty little device, hooked it up, and after a few minutes, I had a fully charged battery!! Yup, my mom is even more automotivally self-sufficient than I am!!! 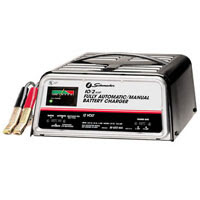 Let me tell you, this thing is wonderful. Now, you do have to plug it into an electrical outlet, but if you’re in a one car garage, that’s much easier to do than to hook up to another car. AND it’s only $49.99!!

I will be buying one of these very soon. This week, probably.

Actually, AutoZone SHOULD give me one for this free advertising, but oh well.

It turned out that the problem was that there was a light on in the backseat. There is a light on the hand grip in the doorway in which I put Ali in and take her out of the car, and I have bumped it a couple of times, either with her head or mine.

Dad called later to check on me and quoted scripture on how to fix this problem: If my eye offends me, pluck it out. Good idea. I will be removing that light bulb as well.

But Dad, if you remove the bulb like you suggested, then if you hit the light, is it smart enough to not divert power to that empty socket, and therefore not run down my battery and not even have a light on to alert me?

Anyway, back to why I am exhausted. There was that, then my doctor’s appointment an hour late (I called in and they said I could come in late) at which we waited for quite a while to see the doctor for all of 30 seconds and for him to say I was fine, then a rush to bible study, then a rush to the grocery store and then lunch at the park with the rest of the fam, and then a rush to get home as we were headed for a late naptime.

So I put an exhausted Ali in bet, and then I get in my office, and I am just dead. I try to work, but with very little progress. So I took a break. I read blogs. I wrote blogs. I found pictures. And I’m still exhausted, and I really need to get some work done. So I’m going to try again now.

3 thoughts on “Electricity (and Gramamma) Saves the Day!!”