I was getting close to running out of checks, so I started my usual perusal of all of the coupon sets in the Sunday paper, to see which of the check printing companies had the best current promotion, and the best design.

I usually like the geometric, modern, symmetrical designs, but this time I completely did a 180. They had checks with William Hallmark paintings on them! I had to get them.

Which reminded me that although I had made a quick mention of it in 100 Random Things about Me, I have never fully blogged on this subject. 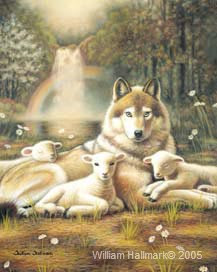 So you’re wondering, who is William Hallmark?

Well, it is very convenient of you to ask such a question, since this blog is, after all, titled “William Hallmark”.

William Hallmark is an amazing artist who lives in Birmingham, but whose paintings are sold all over the world. His greatest skill, in my opinion, is capturing eyes. The eyes in his paintings are absolutely piercing.

Although I absolutely love William’s artwork, my connection with him goes a little further than that. My parents were friends with William when he was in high school (when I was a very little girl). From what they have told me, he painted amazing paintings in his basement, but had never really let that many people see them. They were astounded with his art, and so paid him to paint a picture of our family (his first paid portrait). He did an awesome job, but apparently, he wasn’t happy with his portrayal of me. According to my Mom, I was a challenge to paint – I came out looking unhappy. I have always thought that my natural expression doesn’t look happy. I’ve been trying to work on that. 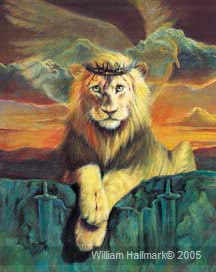 So he repainted me, and then wanted to paint me again in a separate painting. I think I was about 3 or 4 years old. I vaguely remember that somehow that painting was displayed at a First Alabama Bank, and so we went to see it.

A few years later, after he had become a professional painter, he had an idea for a painting and wanted me to be the little girl in the painting. I, of course, was absolutely thrilled with the idea. As an 8 year old, I had quite the “little girl crush” on the 20-something year old that took enough interest in me to feature me in a painting. Then, it was even more unbelievably fun when I found out that I was going to get to hold and feed baby lambs for the picture posing! It was the most fun opportunity any little girl could ever dream of. Here it is, along with the paired painting that he did a few years later (both are hanging in our Living Room):

Blessed are the Pure in Heart 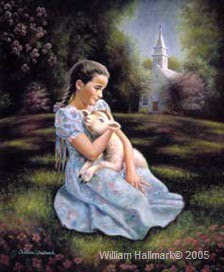 Such is the Kingdom of God 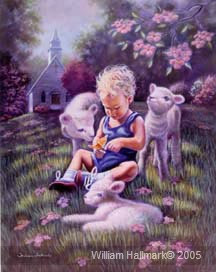 I haven’t seen William in several years, but I did attend a showcase of his artwork in ’06 and got to talk to his Mom for a while. Here is a picture of me and the humongous original painting from that showing: 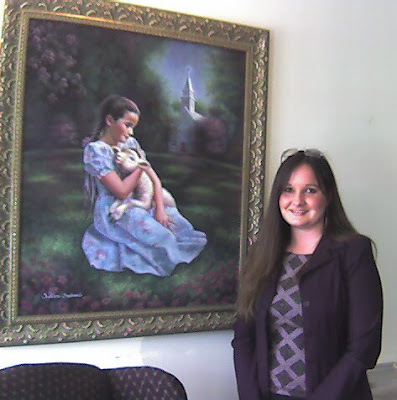 The original above was on loan from business man in Memphis that owns “me”, according to William’s Mom. I am curious who that is and where I normally hang out when not on special showings. 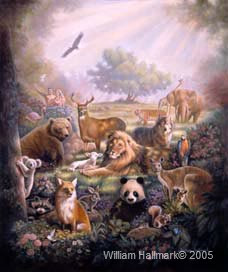 William has an amazing testimony, a very humble heart (he teaches art classes to kids in Trussville! I bet Thomas Kinkade isn’t that humble!!), and is an amazing artist. If you are looking for some affordable and spiritually-focused paintings to display in your house, I highly recommend checking out his website. A lot of his paintings are also really awesome for children’s rooms.