I woke up feeling really weird this morning. First of all, I woke up with a bad headache, and I never get headaches. I don’t like headaches. It is the one sort of pain that I have no tolerance for. I would rather slash my hand on the dresser in my sleep ten times in one night than to have a headache.

So of course I immediately took four Tylenol. I went downstairs to try to get a little work done before Ali woke up, and began pouring sweat and burning up hot. Since our air conditioning likes to freeze up sometimes, I first checked the thermostat. It was where it should be. After spending another 30 minutes getting Ali up (no work done for Mommy!) and trying desperately to find a thermometer (where DO they all go when you need one?!), I finally took my temp and had a medium grade fever, but that was after Tylenol had been in my system for an hour.

So I fed Ali, and by then felt unbelievably sleepy.

So I broke one of my “rules” and let Ali watch VeggieTales in the morning (Note Pro #1). I usually save it for the afternoon when we’re getting anxious for Daddy to get home, and I try not to let her watch one every day. You don’t want veggies rotting the brain, you know.

As she was watching it and I was laying on the couch, and was seriously afraid I was going to fall asleep. So then I was strategizing on what would happen if I put her back in her crib for a little bit so I could sleep because I literally didn’t think I could stay awake!

So I tried a new strategy and got us ready and we went to do errands. You always feel better when you’re out and about, right? So we went to Lifeway and Target and Staples. By the time we got to Staples, I realized that I was not any less sleepier, and I was being less patient than usual with Ali’s issue of demanding loudly everything that she wants (Note Con #1).

So I gave up in Staples and headed home, after veering through the McDonalds drivethru to get a LARGE COKE to try and wake up (did you know that all of their drinks are $1 regardless of size right now??). I wasn’t such a great driver, but we made it.

Got home, fed Ali lunch, and put her down for her nap. The coke had helped a little, so I really tried to get some much needed work done. After getting the most important work done, I decided that I would have to do it – take a nap. So I laid down, and after an hour I THINK I woke up a little and turned on the monitor to check on Ali and she was up (remember her quirk – she never fusses when she wakes up because she really likes staying in bed). Myself remembering her quirk and deciding to take advantage of it in my half-sleep-stupor, turned off the baby monitor and fell back asleep for an hour (Not sure if Ali would call this a pro or con, since she loves staying in bed). All of this is not verifiable fact due to my sleepwalking/dreaming habits. I’m never sure what’s real and what’s not when I’m asleep.

So now, since I’m still feeling pretty exhausted, Ali is watching her

So, all in all, I think me being sick has worked out well for her!

I have no idea what’s wrong with me – I have no other symptoms, except dizziness. Hopefully it will clear up by tomorrow and I’ll get back to better blogging!

Speaking of better blogging, here’s a picture that has nothing to do with anything in this blog, I just have a certain reader (ahem) that complains if I post a blog without pictures. So maybe tomorrow, my blog and my picture will even go together!! 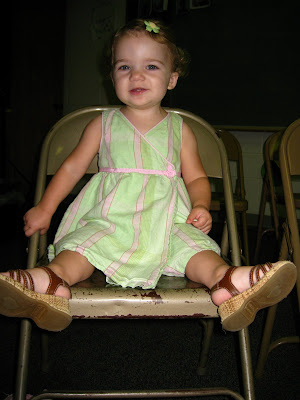 2 thoughts on “The Pros and Cons of Mommy being Sick”