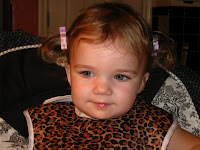 You learn to play their games, what words they know, how to communicate with them, and try to make it through the levels without losing a life (or getting poop on you, like I did last week).

Like for instance – you know if you say “do you want to eat?”, that no matter how much she was ignoring you, she will stop, drop whatever she has, run to you, and say, “EEEEEEEAT!! HUNGRY!!!”. It’s as powerful as having the fireballs in Mario (which I much prefer to the feather – I know – we play too many video games to be parents. But the Wii is just so much fun!) 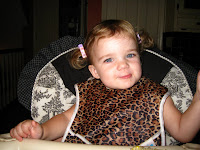 But sometimes, accidentally, you happen upon a secret level that you had no idea existed, and its an “AHHH!!” moment.

I had one of these the other day, which is where my off the wall Nintendo analogy came from.
I had just finished running up the stairs for the 67th time for the day, and I picked up Ali, and a bit dramatically, I started panting to showcase my exhaustion. She looked at me, smiled really big, and said, “Puppies!!!” and started panting right along with me.
Then it hit me that she must have learned that puppies say “heh heh heh” (with their tongues hanging out, of course) the last time that she was at Gramamma’s (where there are still 6 adorable puppies left, by the way). 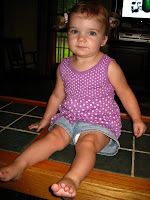 These moments don’t happen to me much since I am pretty much with her for her every waking moment, but it never fails to catch me off guard and thrill me when it does. But when other people are interacting with her, they get to discover “hidden levels” left and right, hopefully without losing a life, or getting pooped on.

Hopefully this analogy wasn’t quite as hard to understand as Chris’ infamous “Onion of Purity” analogy.

4 thoughts on “another weird analogy that hit me the other day. . .”