You know how when you hear a word you’ve never heard before, you then hear that word 5 more times in the same week? You know how you can sometimes manage to keep bumping into the same person in random places over and over (like the random woman that I saw at lunch on one side of town and then at dinner at another side of town on Tuesday)? I have had that experience, over a period of many years, with Jesus in a Box.

I was first introduced to Jesus in a Box (JIB) shortly after I joined facebook several years ago. There was a facebook account set up with a picture of a statue of Jesus, encased in a glass box with wood panes through it (making it look more like a jail cell). It was intriguing to me, because it was a “UAB” account – so I was quite curious if this statue was on UAB’s campus, or if it was just a random statue. Every now and then, I would see the facebook account again, and my curiosity would once again be piqued.
Last year, when we moved to our new house, I finally got my answer. I was driving down Overton Road (a road I had been on many times before, but that I now drive on at least 4 times a week), and I happened to look to my left, and there it was – the JIB Statue!! It was in someone’s front yard, as boxed in as ever, and the box was even built on top of bricks!! THAT statue wasn’t going anywhere!! Here it is: 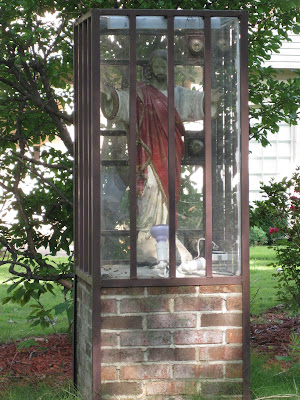 Then I passed it at night, and realized it had spooky uplighting in it: 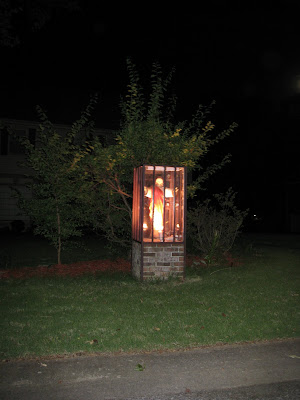 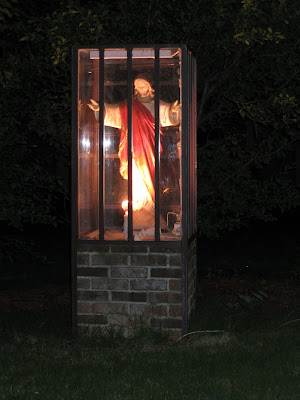 Now that I knew that JIB was in someone’s front yard, it puzzled me even more. What were they trying to say? What was the purpose of JIB? I’m all for sharing Jesus with my neighbors, but is this an effective way of doing so? It’s a little strange and “out there” to me. Do they think that someone is going to drive by their statue of Jesus, encased in a glass box, and all of a sudden want to follow Christ? What about Exodus 20:4, in the ten commandments, that says (In King James version, for effect), “Thou shalt not make unto thee any graven image, or any likeness of any thing that is in heaven above, or that is in the earth beneath, or that is in the water under the earth.”?

Then I also wondered: who created the facebook account? Surely its not the people that live in the JIB house. Is it someone that knows them? Or just someone, that, like me, was driving by one day and saw it?

Some time passed, and one day I was in Cahaba Heights (the town right next to the street on which JIB resides, and I was behind this truck: 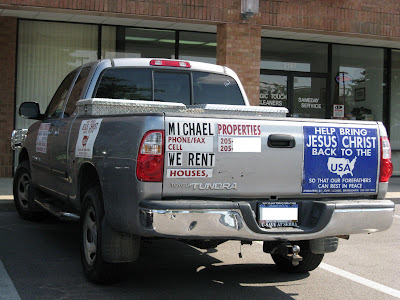 I have also been aware of this company for quite some time. They bought up a bunch of the Cahaba Heights rental properties from the Landlord of our first townhouse when he retired. So their signs have been around Cahaba Heights for years, and I have seen this truck many times as well. So I’m headed home, and he’s in front of me. Sure enough, he turns into the JIB house!! He is the owner. Makes a little more sense, seeing as I have always thought all of the signs on his truck were a bit outlandish also. It’s not that I don’t agree with his statements, it’s just that I tend to be a little more, shall we say, subtle, about making statements.

Recently, I had one more loose end tied up regarding JIB. Through Eli’s shower and birth and hospital stay, I got to know one of Lindsay’s friends, Julie. One day, via facebook, I found out that she was the co-creator of the Facebook JIB account!! Mystery solved!! She said that she and her friend, like I, happened to be driving down Overton Road one day, looked to the left, and did a U-Turn to go figure out why in the world Jesus was in a box!

So, if you ever happen to be driving down Overton Road, look to the left, and see Jesus in a Box, at least you’ll have more questions answered than I did! But I’m still looking for the answer to the question, “why????”

9 thoughts on “Jesus in a Box”