Today was one of those “I’m exhausted purely because I have an 18 month old” days. She wasn’t disobedient or rebellious, just 18 months old. You know, busy, high maintenance, wanting everything, then not wanting it when she gets it, etc.

One especially exhausting part was something we are really working on this week – she is very demanding sounding when she wants something (even when I am 12 inches away from her, looking her in the eye). For instance: she wants a cracker, so she says “CRAAAAAAAAAAACKER!!!!!”, and so I patiently say, “that’s not the way you ask for something, can you say ‘cracker, please.'” (and I smile to try to portray the right attitude to have when saying something), so then she says “cracker, please” in a small, meek voice, with the corresponding smile. We went through this routine regarding various items at least 156 times before naptime, and around 47.5 times during the writing of this blog. 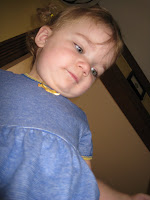 Also, some of her demands are so loud and urgent that, for the life of me, I can’t understand what she is asking for, which makes it really hard to get her to ask meekly for something that I don’t even know what she wants.
Anyway, I wasn’t mad or aggravated with her – she’s just ONE, for goodness’ sake (a fact which she proudly announced at the playground today – I was asking how old the girl was that was swinging next to Ali, and Ali held up one finger and loudly interrupted, “ONE!”). But I was ready for a break. So I put her down for her afternoon nap, hoping that it would be an extra long one, seeing as how she went to bed really late last night, woke up early, and had been so, umm, “energetic”, all morning.

Naptime turned out to be slightly shorter than normal, a little under 3 hours (during which I worked, of course, which actually IS relaxing to me). I wasn’t quite ready to enter back into toddler land, and she didn’t seem as awake as she usually is, so I decided to try a Grand Experiment.

I grabbed her with her paci (only allowed at naptime and bedtime) and her pillow and headed to my bedroom, where I had turned out all of the lights and closed the blinds really good. I told her that it was still night- night time, so we needed to rest. She said “night-night, rest”, and laid down on her pillow.

I laid down next to her on my pillow, and put my arm around her to reinforce the night night idea. I think it was the first time that she had realized that I actually slept there, because she got this voice of wonder, tapped my pillow, and said “MEME’S pillow!!!” (Meme is my name of the day). But she got the point. She laid down, put her fingers on her eyes (presumably to close them), and said “night-night”.

The Grand Experiment lasted for a whole 12 minutes, which I’m pretty sure is equal to about 8.5 Months in Toddler Years.

There were a few interruptions, like a long string of her “tooting”, laughing, and then announcing “TOOT!!” (Daddy’s been teaching her some new tricks), but she really did actually lay down, very still (except for the arching of her back and straining for the toots), for TWELVE WHOLE MINUTES before she was standing up in bed, reaching for the pictures hung precariously close to the bed, pointing and naming “Daa-y! Meme!! Ayi!!”.

So we got up, and are now playing (I’ve started and stopped this blog a few times to read books, give out snacks, and help pull out toys).

So my question is: if ONE toddler exhausts me (I know you’re all thinking I’m a complete wuss right now, and that’s fine because I probably am), how am I ever supposed to have more than one?

She really doesn’t exhaust me every day (maybe not even most days), but I’m pretty sure that if I had two, today would be a rarely calm day.

I want to understand though – some of my friends tell me that they’re less exhausted with two than they were with one. I’m assuming this is because they play together rather than with only Mommy? But I would say last night with both Ali and AJ, there was just as much crowd control needed as there usually is entertainment, so I’m not sure if I buy that whole “they entertain each other” logic.

Chris and I joke all the time and say “add that to our list to have an only child”. But I really like the whole “one kid” thing. At least right now I do. And not just for the easiness of my life – Chris and I really enjoy Ali and love to relate to her one on one (or even two on one). Besides the fact that Chris needs me doing the accounting for his company (plus the other two companies I work for), which is something that would be excruciatingly difficult with two children.

I know – it could be just selfishness and maybe I should be trying to get pregnant, but I HAVE actually prayed about it, and have yet to be convicted.

7 thoughts on “The Grand Experiment and associated thoughts”