Before I get to today’s blog, I owe a picture of adorable puppies!!! These are my pup-nieces and pup-nephews! Aren’t they cute? Don’t you want one?!?!? 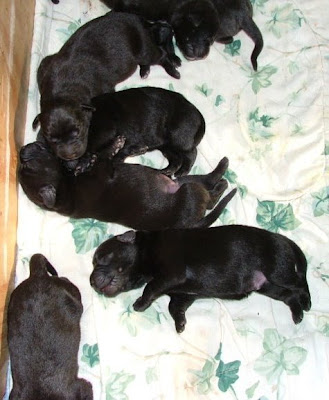 Ali and I had to stop by work (job #1 – Slappey Telephone) before going to the zoo, though. Bill (Slappey) made a second comment in a week about Ali being a productivity stopper (joking – or at least half joking) because everyone quits working and plays with her for a minute. I explained to Bill that she was nothing of the sort! In fact, she was quite the Morale Booster for the company! I told him that the whole accounting department could be glum and stressed out, but as soon as we came in the building, there were screams of glee and immediate smiles and cooing! Immediately, it was like a lightbulb went off in his head – “OH, this baby is GOOD for the company.” So he insisted on making a sign and putting it on her back: 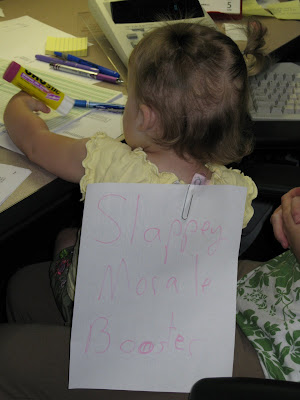 He is infamous for spelling things wrong, and on his first try, he wrote “Slappey Moral Booster”. I told him that he needed to add the “e” – that she was definitely a Morale Booster, not a Moral Booster, unless you wanted to say she was an example of what happens if you’re not celibate. ;) However, he said he’d pay for it if I would get her a t-shirt made that said “Slappey Morale Booster” on it.

So after we left the office and I managed to un-paper-clip Ali’s sign, we headed to the zoo to meet AJ and Ashley!! It was a HOT day for the zoo, but it was still fun! Chris would have totally laughed at Ashley and I, as we both had on long pants. Chris wears shorts every day of the year, including to work, as long as it is above his official cutoff of 50 degrees (which is most days in Alabama).

Anyway, here is a picture of the girls holding hands in the butterfly exhibit: 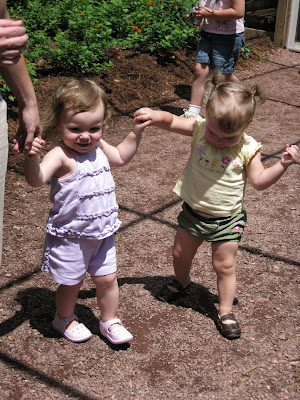 I have been dying to go into the Lorikeet exhibit, because I have NEVER gotten to go in there before, and it looks so fun!! You pay $1.50 for a little cup of “nectar”, and you go in and all the birds land on you and drink the nectar. So we bought the nectar and headed in. Ali was a little taken aback by the birds landing on me, but she was also intrigued. Of course, being the adventurous Mommy that I am, I handed the little cup of nectar to my 17 month old so that the birds would land on her. What does she do? Well, of course, being a 17 month old, she immediately dumps our nectar onto the ground. No more nectar. However, the birds would still come to me for a minute, until they realized that I had nothing for them. Here are a couple of pictures of me holding a Lorikeet for Ali to look at (and Ali holding our now empty cup of nectar): 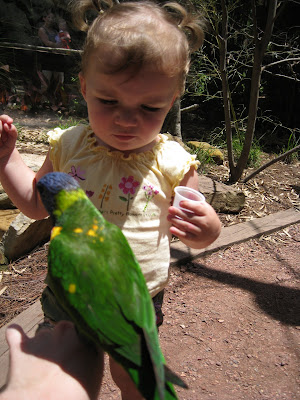 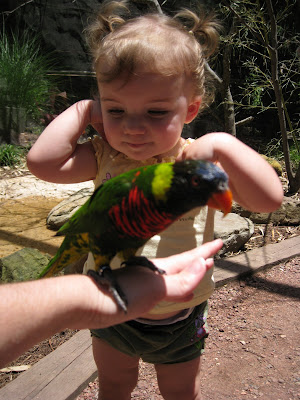 I want to go back and stay in the Lorikeet exhibit longer. And try to hold onto the nectar next time. It was really fun! And Ali really enjoyed watching, if not touching or holding, the Lorikeets. 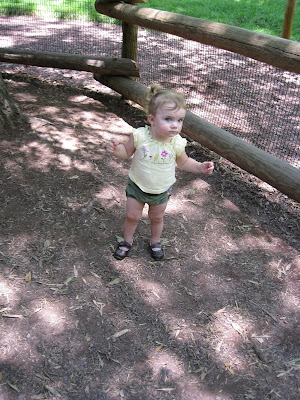 It was almost time to leave, and I wanted an opportunity to play with my “continuous shot” feature on my new camera. So, I told AJ to give Ali a hug. Here she is going in for the hug. . . 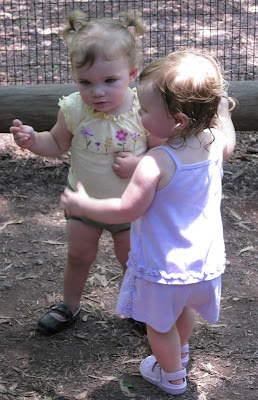 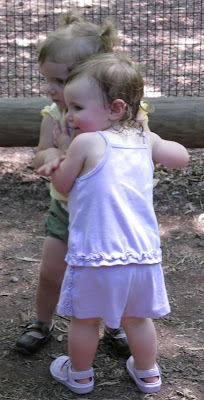 And, the double fall resulting from the hug. 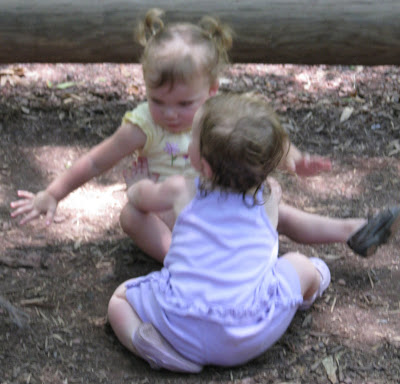 5 thoughts on “Puppies, Morale and Morals, Lorikeets, and Hugs.”