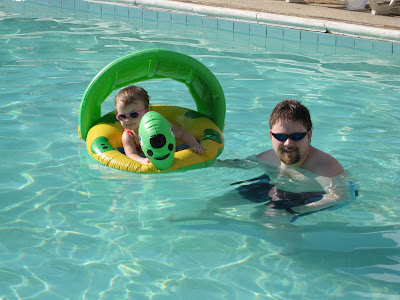 All weekend was Father’s Day weekend, and it was a great one! I made Chris pick everything we ate and did, and on Sunday, he wanted to go swimming at the pool at Mammaw’s condo. However, although I have added a picture of our swimming fun, this blog has nothing to do with swimming. There’s a mystery afoot!!

So while Ali was napping, I set out to Wal-Mart to find some of the new floaties that also have the piece across the chest that we have heard are really great to keep babies from dunking their heads in the water. I searched the four different places in Wal-Mart that they had pool toys, but with no luck. So I headed across the street to K-Mart, hoping I would have better luck.

I have never been in that K-Mart, and although it is across the street from WM, it just seems like such a crummier part of town, so I was suspect before I went in. And boy, was I right.
I search the first pool place, no luck. So I head back to the toy department. I go down the aisle where the water toys are, and there are two other girls on this aisle, talking and looking at things. Still no luck, so I go off the aisle and start looking down other aisles to see if there are any other water toys. I notice this guy in blue jeans at the end of the aisle that I just came off of, and he catches my eye at first because he looks like this guy that goes to our church that is really creepy looking (more so because I had this dream of him one time and he was an evil guy in my dream – but I digress). He was standing at the end of the aisle, and every 15 seconds or so, he would lean over, look down the aisle at the two girls, then jerk back up. He reminded me of a husband that is dragged to the lingerie department with his wife, and is too nervous to go down the aisle, so is just waiting for his wife and keeping an eye on her. Then I remembered that the two girls on the aisle were younger than him (20’s – he was in 40’s), and they were black and he was white, which made it more improbable that they were all together. So I watch this guy a bit, and he continues his VERY conspicuous spying. I go back down the said aisle, looking again for floaties. He is aware I’m watching him. Sure enough, within the minute I’m on the aisle, I catch him peeking twice. A bit freaked out now, I leave the aisle going the other direction.
That’s when it got really freaky. There’s ANOTHER GUY doing the EXACT same thing on the other end of the aisle!! This time its a well-dressed black guy. OK – now my heart is racing, and I’m thinking there’s about to be a kidnapping or murder right in the middle of K-Mart! So I think about reporting suspicious activity to a manager, but I don’t see one. I go to the exact opposite corner of the store, still trying to find floaties. STILL no luck. I ask someone for help, they send me to the gardening department, right on the other side of the toys where the bizarreness is happening. I’m scared, but more intrigued and curious. So I head back to the opposite end of the store. At least 10 minutes have passed. I get back over there, and the two girls are STILL on the same aisle, and the two guys are still conspicuously peeking at them, this time they are both on the same side of the aisle, flanking it on the left and right, still doing their crazy lean, peek, jerk back up. WEIRD!! So now I think – there’s no way these girls don’t realize they’re there. Maybe they’re body guards and these two girls are celebrities or something! They finally leave the aisle and I get a good look at them, and they certainly don’t look like celebrities to me. Creepy guys still hanging out watching them.
So I finally leave, without the floaties I was looking for, without reporting said creepiness to manager.
I am SUCH a curious person. I need ideas of what could have been going on!! Chris’ theory is that the two guys worked for the store, and that they suspected the girls of shoplifting (which makes sense since they were on the same aisle for 20 minutes!), and were TRYING to be conspicuous so the girls knew that they were watching. Sounds like a decent theory, but the white guy wasn’t dressed like an employee – had on jeans. But then another friend said that a lot of stores have plainclothes employees around to specifically watch for shoplifters.
The mystery here reminds me of my favorite blogs ever by Greta about the Stranger in the Garage. Although that one was much funnier than this one.
Anyway, I have asked God to add this to my list of things that I want answers to when I get to heaven! :D That’s a LONG list, so I hope God is keeping up with it well!
In the meantime, anyone have any theories? Or see any kidnapping or murder in K-Mart cases on TV? :)
Bizarre.