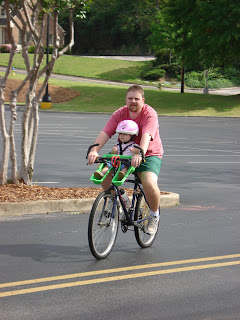 When Ali woke up from her AWESOME-post-sleepover nap yesterday (awesome because it was long and therefore allowed us to recover from all the excitement ourselves), of course the first thing she said was “AJ? AJ!!” We had to tell her that AJ went home, which she was sad about, but she recovered.
And, because the Callahan family just hadn’t had enough new experiences and excitement for one weekend, we decided to take Ali out for her first bicycle ride. Chris and I absolutely LOVE biking – we did a ton of it before Ali was born, and we haven’t had the opportunity to bike much except on vacations since. So I had ordered her a cool bike seat off of Amazon (it got the best reviews I have ever seen for anything on Amazon!!), and we were ready to try it out! We weren’t sure how she would do, because she loves swinging and being thrown in the air, but on the other hand, she has gotten a little more cautious lately. We parked at Brookwood Mall to take the Lakeshore trail (a good easy paved trip for her first ride), and Chris unloaded the bicycles while I got her helmet strapped on (which takes longer than you think – first to figure 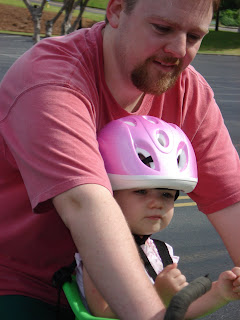 out which way is the front, and then to get it strapped on before she pulls it off, and then to get it tightened while she wiggles to try and get out from under it). I took her around the side of the truck where the bikes were, and when she saw the baby seat on it, much like the camels at the zoo, immediately started shaking her head and saying “uh uh – uh uh”. Chris got on the bike, and I strapped her a million ways into the seat, and all the while she was moaning and expressing her fear and discontent in every way she could think of. We finally got her all strapped in, got her helmet out of her eyes, and the second Chris took off on the bike with her, she quit fussing. Just a few minutes into our bike ride, she was making her “bbbbdinn” noises that she does when she sees my Dad’s motorcycle (hmm. . . maybe Dad DID take her for a ride on the motorcycle. . . .). Anyway, she loved it. I think it will definitely become a Callahan Family regular weekend activity! By the way, when we were in the car leaving, I happened to look inside her helmet, and there was a big, red “Front —>” sticker – and yes, I did have her helmet on backwards. After all that time trying to figure out which was was the front.
Today, Ali has been very giggly. I love it! She is not normally a big laugher, but every now and then she gets the giggles. In fact, right now as I blog, she is hiding behind the curtains (I say, “where’s Ali?”), popping out and laughing. We weren’t having lunch with my family today, so we went through Arby’s after church. On the way home, she was wanting our french fries as usual (anytime we go through a drive-thru of any kind, she immediately starts saying “pleeeeeease” – even if its the bank line), and to keep her new Elmo (a gift from AJ for letting her spend the night!!) from getting greasy, Chris stuck him up in my sunglasses holder in the ceiling of the car, where he was staring down at Ali. She found this HILARIOUS. She kept pointing at Elmo and laughing – saying “Hey Elmo!” and laughing. Eating her french fries and laughing. Just a lot of laughing. Then, she made us laugh – big belly laughs. She finished her fries and wanted Elmo back, so I gave him to her. She kissed him and played with him for a minute, then “dropped” him. I told her “no drop”, waited a minute, then gave him back to her. She played with him for a minute, kissed him, then THREW him. Then meekly, she pointed and said “uh oh. Please.”. I told her no, that she had dropped him after I told her not to, and that she couldn’t have him back right now. Then Chris and I got into a conversation about the port-a-potty from the oddly named business “Anne’s Cans” that has been, for at least three weeks, in the front yard of one of our neighbors (who, unlike us, happens to reside in Mountain Brook). Of course, the assumption is that they are having work done on their house and they don’t want the construction people using their bathroom, but I go by that house at least twice a day, and have yet to see a construction person anywhere near Anne’s can. So we were discussing the possibilities – my idea was could it be that “Anne” lived there and was just promoting her business? And if that were the case, what WOULD her Mountain Brook neighbors say about that? Chris’ possibility was that maybe they had a septic tank backup and their toilets weren’t working so they had an Anne’s Can for the family’s use? Anyway, obviously we were deep in important discussion and had tuned Ali somewhat out. She had been saying “Hey! Hey!” – then ramped it up since we hadn’t heard her and was yelling “HEY!!! HEY!!!!!”. The last “hey” was a dull roar. We finally turned around and said “yes ma’am?” She meekly points to Elmo in the floor and says “uh oh.”
We laughed and laughed. It was a hilarious moment, and maybe you had to be there to really appreciate the hilarity – you tell me. I did give her Elmo back, with another reminder “no drop OR throw”. Anyway, Ali’s back to giggling again. I think I’ll go play with her.