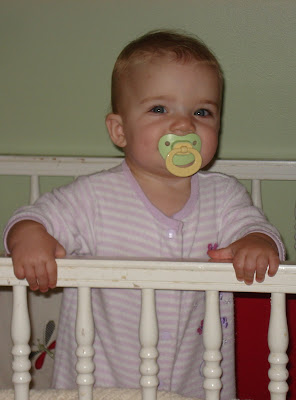 Ali and her paci at 9 months 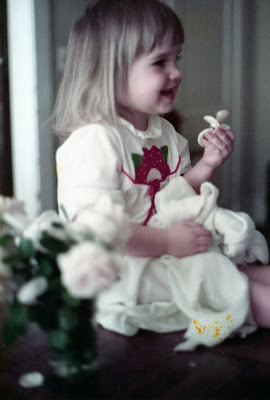 Ok – so I am not a Lord of the Rings fan. I went to watch the first one at the theatre at midnight the night it came out with Chris and a bunch of friends (including Ann Marie, who can locate every place on the map of middle earth!!!), and I couldn’t sleep all night afterward because it kept going through my head, so I decided I never wanted to watch any of them again.

However, when I got home from Lifegroup last night, Chris had the last one on, and it was almost to the end, so I begrudgingly half-watched the last hour of so of it while doing anything I could to not watch it (reading the paper, reading blogs, shopping on the internet). However, the END is not so bad – it’s nice and climactic, then happy. Not as intense as watching 4 hours of nothing but hopeless dread.

While watching, I noticed a similarity to the power of the ring. You know how everyone can’t help but put it on, and it is just absolutely compelling even though they know they shouldn’t have it on? I think Ali’s pacifiers are her ring.

Ali, like Frodo, is a very, very obedient, pure child (most of the time, up to this point in her long, long life). She almost always obeys me without fussing. However, Paci’s are the one exception. She only gets them for naptimes and bedtimes. When she wakes up, she has all three of them – one in her mouth, and one in each hand. I pick her up out of bed, and I say kindly and sympathetically, “drop your paci’s in the crib!” She looks at me sadly, and slowly pulls the first paci out of her mouth with a free finger. She looks at it, she looks at me. She sometimes can’t help but put it back in her mouth – just for a second. Sometimes it looks like her hand is powerless to the magnetic draw of her mouth. She finally drops the first paci in the crib. I say “time to leave the next paci!” Remember, the first paci to go in the crib was the one in her mouth, so now she just has one in each hand. She puts the one in the visible hand (her right hand is behind my back) in her mouth for one last satisfying drag. Again, she looks at me forlornly, but finally takes it out and drops it in the crib. At this point, she is really hoping that I have forgotten that she has a paci behind her back. I say “time to put your last paci in the crib.” She pulls it out, puts it in her mouth (powerlessly) for one last drag. Sometimes on the last one, I have to tell her several times, and she powerlessly puts it back in her mouth several times. It just is so compelling, and that last drag on a paci is so satisfying. Finally, she drops it in the crib.

Then we celebrate!! We jump up and down and kiss, and she is happy. It’s just separating with them that is the hard part. Once they are in the crib (the lake of fire), they are powerless over her. She is back to her happy, bright life in the Shire.

4 thoughts on “are pacifiers the ring of Mordor?”